To go anywhere with children is a major undertaking.  I feel like as a parent I live by the Boy Scout motto "Be Prepared".

We have a checklist when getting ready.
Sippy Cups.  Let me just talk about my love/hate relationship with sippy cups.  I love them for helping prevent messes, but keeping up with them is going to give me gray hair.  It never fails that when it's time to leave the house one of the boys has taken the sippy cup we've made for him and lost it somewhere.    We can turn our backs for just a second and it's gone.  You'd think the sippy cups would be easy to find.  Not so much! The lost sippy cup below delayed our departure at least 10 minutes.  We looked all over the house (and our house isn't that big) for this red sippy cup.  Can you see it?  It blends right in.  I know you're thinking, you should have just made another one.  Probably so, but it's the principle of it.  When you take the time to make the sippy cup you just don't want to take the time to make another.  We have a very precise way of filling the sippy cup.  We only put in a little juice and mostly water.  Crazy, I know!  We were determined to find the sippy cup even if we were going to be late.  Thank goodness one of us spotted it hidden on the bookshelf with the children's books.  Since we were running late, I decided to take a photo of the camouflaged sippy cup for a blog post.  Why not?  This is my life.  I've become a sippy cup wrangler. 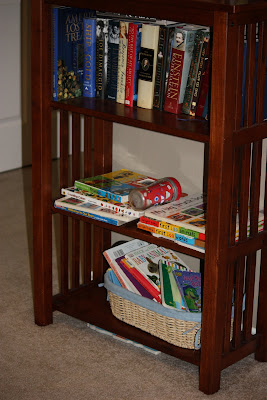 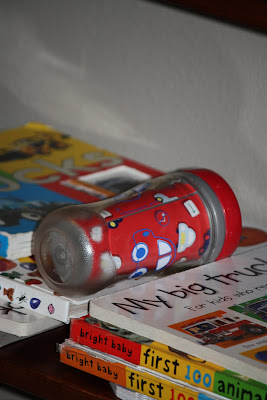