On Ben's birthday, he had donuts for breakfast and cupcakes at school with his class.  The fun continued all throughout the day because it was field day at school on his birthday.  How fun! 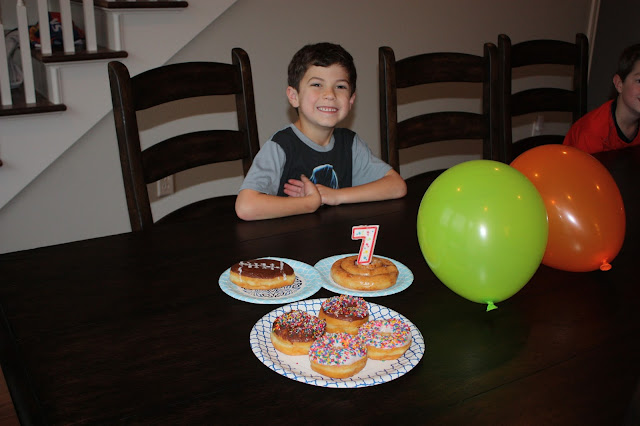 That evening once we got home from school and church, Ben opened a few gifts from us. 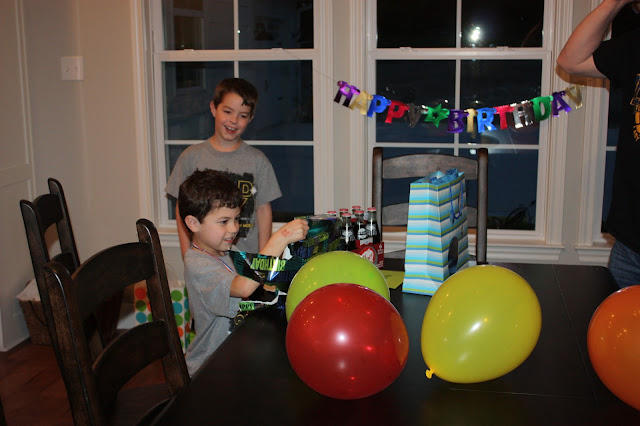 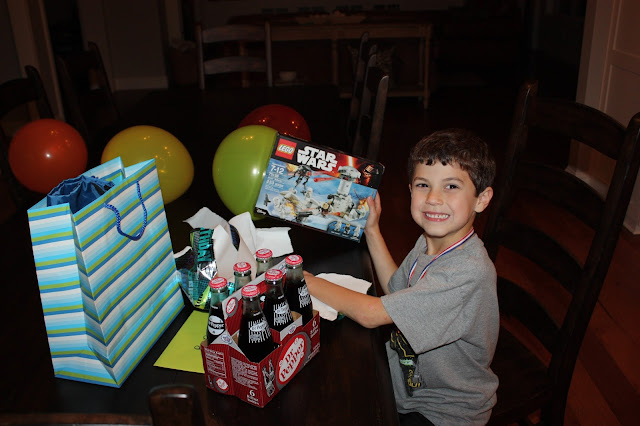 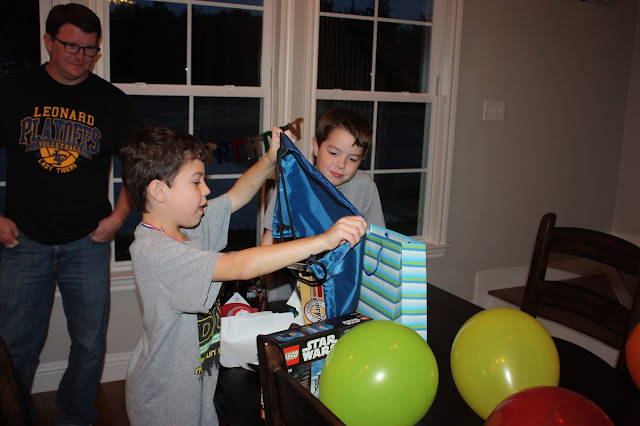 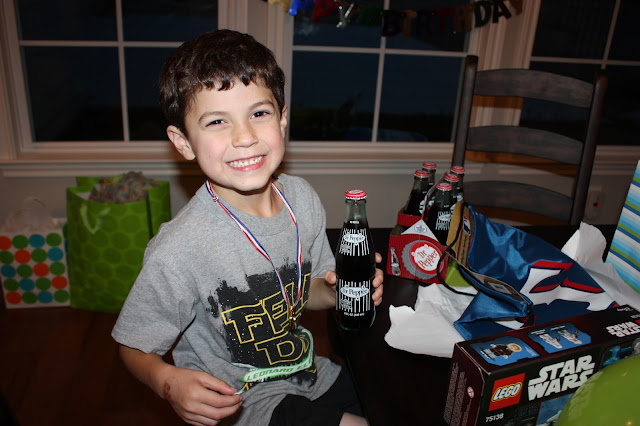 We had to work hard to find a a free weekend to have Ben's party.  End of year baseball tournaments and other activities made it a challenge to schedule it this year.  We ended up celebrating this weekend so it felt like Ben's birthday celebrations lasted about 2 weeks.

Ben chose Chuck E. Cheese's for his party.  This was a first for us.  Since attending friends' parties there he thought it would be cool.  I have to admit it was easy for us and low stress so I'm not against this for a birthday party. 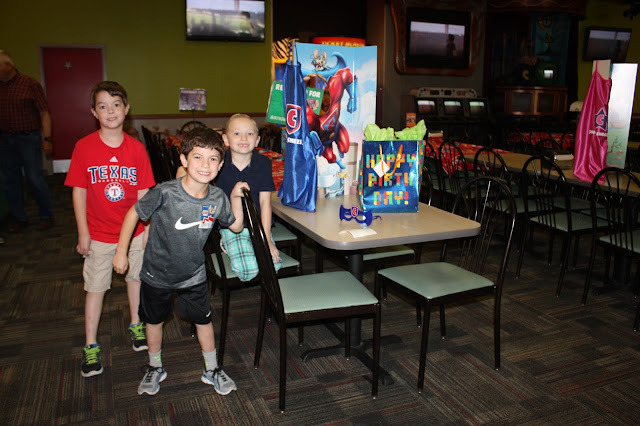 I made throwback cupcakes instead of cake.  Notice the candy letters like we used to have on our birthday cakes when we were kids.  I decided on cupcakes instead of a cake so I didn't have to worry about transporting a decorated cake there.  The party treats were candy kabobs that I'd seen a friend on Instagram make.  There are all sorts of examples if you look it up on Pinterest. 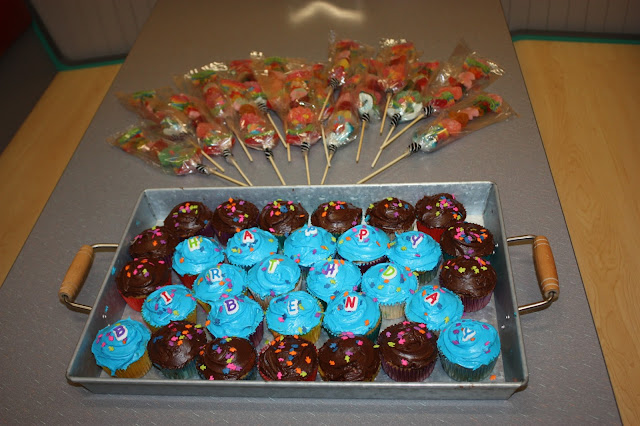 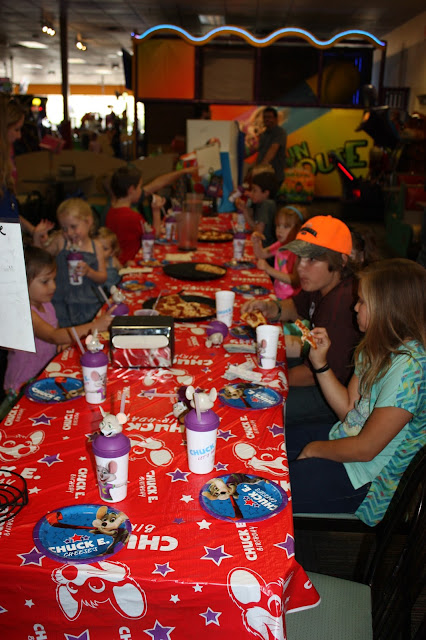 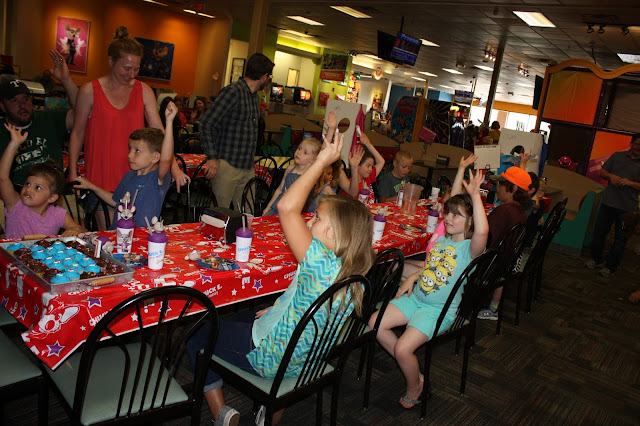 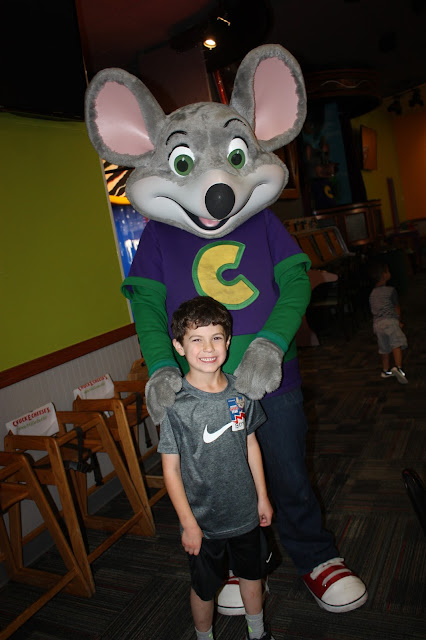 The TICKET BLASTER!!!
I think this was a big part of why Ben wanted to have his party at Chuck E. Cheese's. 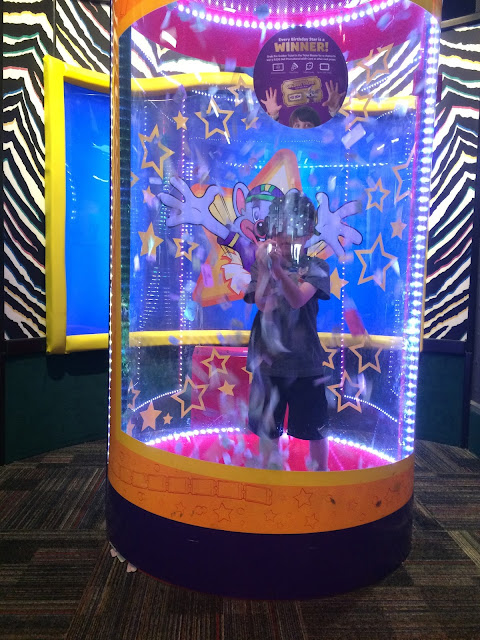 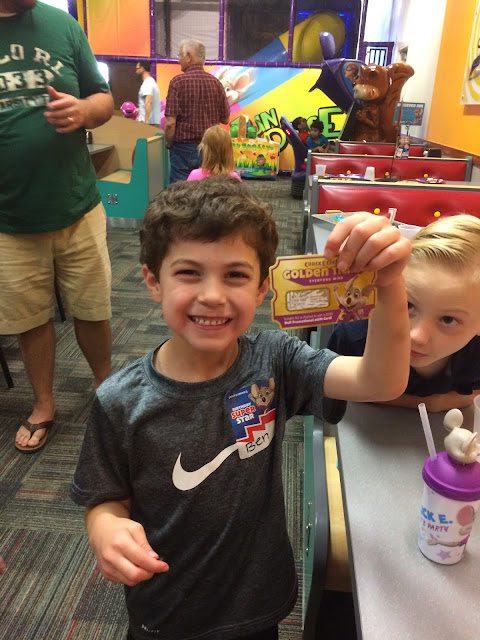 You might be wondering, "Why Christmas photos in June?", which is a good question.  I use the blog as a place to keep memories for our family, and the school musicals were something special I wanted to make sure I had saved in my little blog world (AKA my digital-family-scrapbook-that-gets-shared-on-the-world-wide-web).

Ben's Christmas musical was adorable.
Ben was Dasher for the song "Rudolph the Red-Nosed Reindeer". 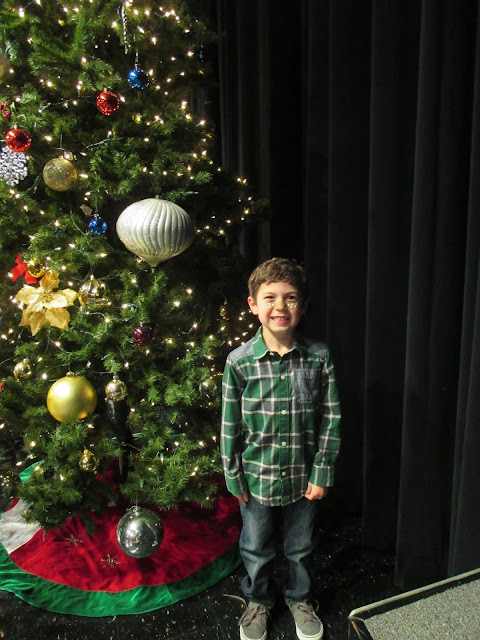 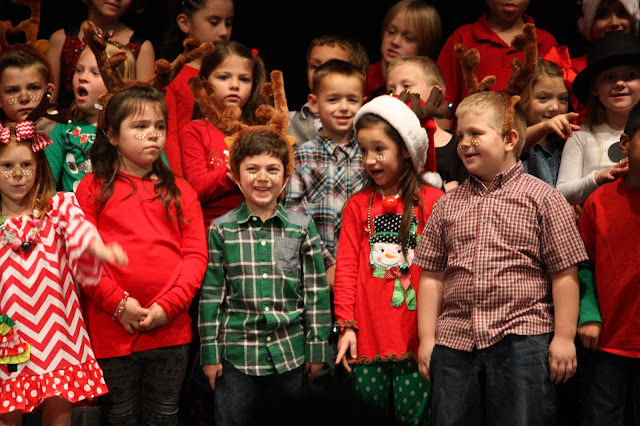 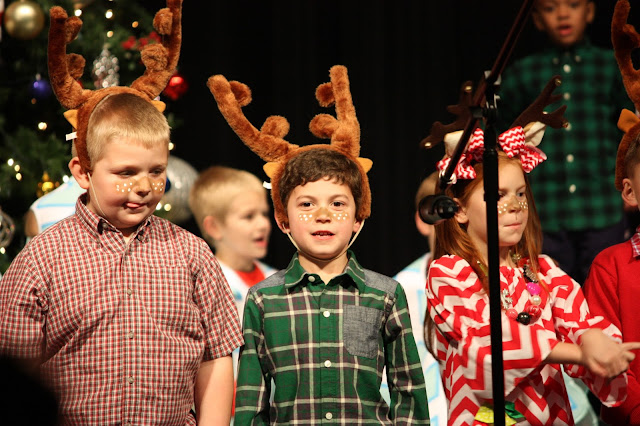 Will's spring musical theme was Texas Rodeo.
His favorite part was the square dance song "Shake Them 'Simmons Down". 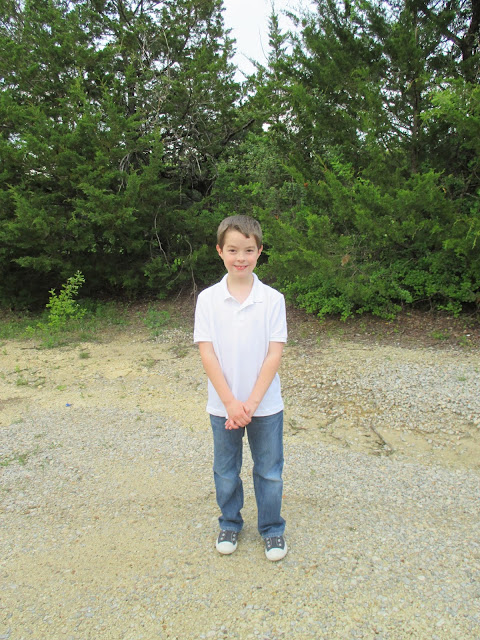 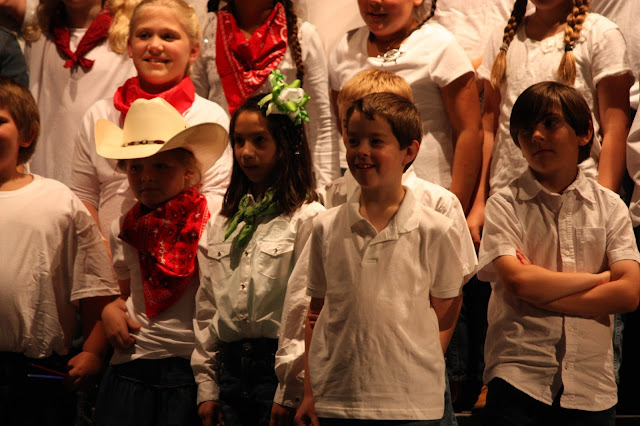 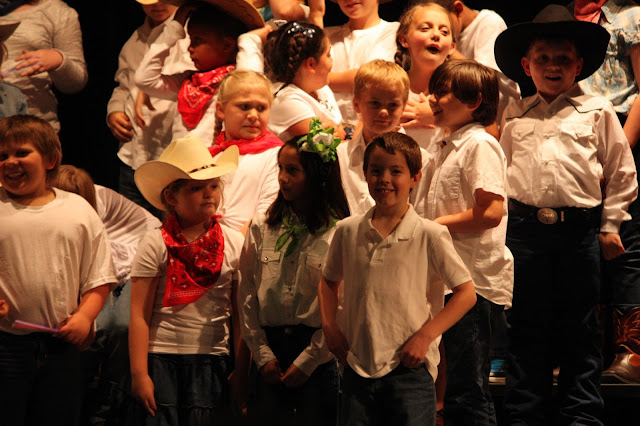 Posted by Michele at 5:01 PM No comments:

It's Been a Great School Year!

This is the last year that both boys will be in the elementary school together so it was a special year for our family.

This school year has been an adventure for our us.  We have lived in 3 different houses, which is hard to believe as I'm typing it.  We sold a house and built a house.  The boys adjusted to the changes and stress better than I imagined.  I really couldn't have asked for them to handle it any better.  I'm thankful that all the adjustments didn't have an impact on their learning.  We are proud of all their hard work, effort, and accomplishments.  Most of all I'm happy they made friends, learned, and had fun.

It seems we are blessed each year with educators who make it their mission in life to invest in the future of our children.  Mark and I are educators so naturally we value education.  We know it's not an easy job, and it's often thankless.  Both of our boys' teachers are truly gifted and helped our boys excel.  If it weren't for them I know they wouldn't be where they are today.  What a special thing to encourage a love of learning! 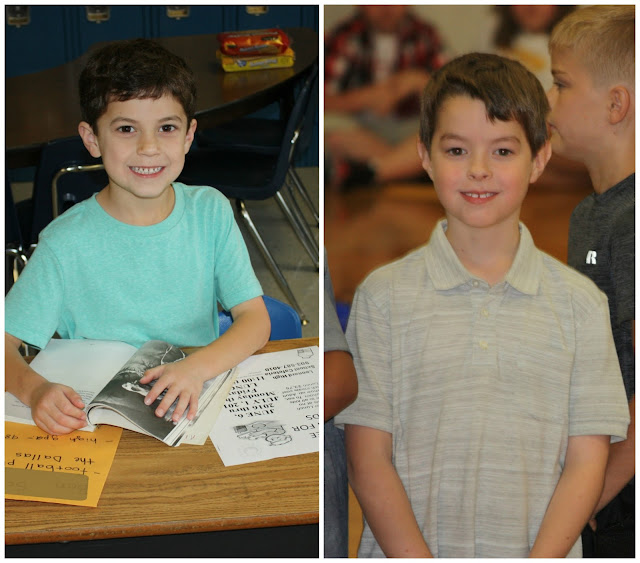 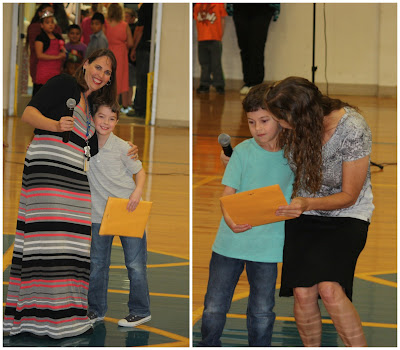 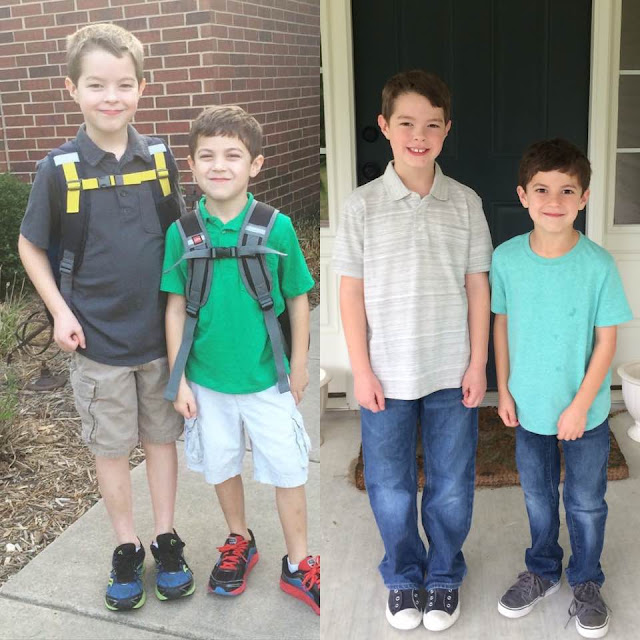 We're so proud of you, Will and Ben!

I look forward to an awesome summer full of relaxing, adventure, fun, and spending time at our new home. 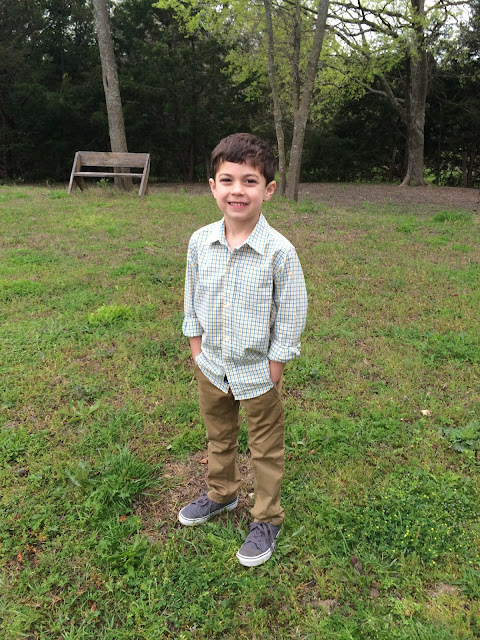 Ben has really grown up over the last year.

Ben is finishing up first grade, and we are proud of all that he has learned.  He started the school year reading a few words and now he can read whatever he wants.  He even earned a spot in the top 10 for A.R. points in his grade.

Ben has been playing coach pitch baseball.  He is attentive and tries hard to do what the coaches ask of him.

Just as I've written about Ben before, he is still ready to play and get dirty.  He wears out the knees in his jeans, which is evidence of playing hard and having fun.  Ben is becoming quite the little artist.  He draws some things from his imagination and others he can draw by copying what he sees.  Ben likes playing PS4 games, watching TV and movies (at home and on the DVD player in the car), playing games on the iPad, building Legos and making his own creative Lego creations.  Ben likes to be a helper, and he doesn't like to be left out.  He is funny, smart, sweet, and kind.

The best show on television according to Ben is Ninjago, and Odd Squad on PBS kids, and he said it used to be Chima but it go deleted but he still likes it.

Ben's favorite thing to learn about in school is math and recess in the gym and lunch.

Ben's favorite thing about school is recess and gym time and centers.

If Ben could go anywhere in the world, he'd go to Florida to go to Disney World.

When Ben grows up he wants to be a baseball player.

His current favorite song is "Stressed Out" by twenty one pilots.

Ben's birthday meal, if he could choose would be Cane's Chickens

We celebrated Ben's birthday early by going to a Rangers game.  He also picked all the places we got to eat on the Memorial Day weekend.  This morning he got donuts for breakfast.  Today was field day at his elementary school and he helped me make cupcakes to share with his class.


We plan to celebrate his birthday with friends and family by having a party at Chuck E. Cheese's (Ben's choosing) later this month.
Posted by Michele at 8:25 PM No comments: