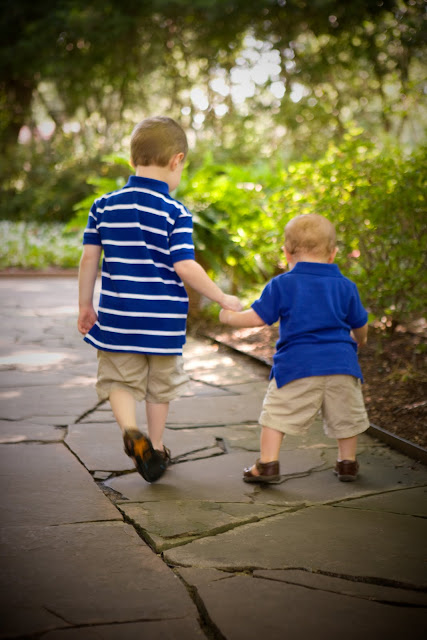 It finally happened!  I'm not sure when it took place, but Will has finally accepted his role as big brother.  And, he's a great big brother!  It's taken thirteen months for him to adjust and get to this point.  I'll share with you some of our ups and downs as we have made the adjustment.  I'm only speaking from the experience in our family. I don't want to freak out parents who are about to have another baby (not that anyone even reads this blog) but just know I'm only speaking from my personal experience. Many of my friends have had new babies and their children seem to adjust just fine.

Bringing a new sibling into the family naturally causes the family dynamic to change.  Change is hard for most people and it's especially hard if you are two and a half.  Will was two and a half when Ben was born, and he didn't really understand how his world was going to change.  He was the center of our universe since he was born.  Will acted like a typical two and half year old does.  He had his sweet, loving moments and his temper tantrums if he didn't get his way.  We did all of the things we thought you are supposed to do to prepare a child for a new sibling.  We read books about becoming a big brother and new babies.  We included him at some of the doctor visits.  He talked to the baby in my tummy and kissed my ever-expanding belly.  We didn't know what other things to do.  That's what most people I know do.

When Ben was born, Will stayed with Mark's parents, Mamaw and Papaw.  They brought Will to the hospital the day Ben was born.  He never seemed really interested in wanting to hold the baby.  Honestly, we never encouraged it.  I was afraid when we took the baby home that Will would try to pick him up.  I've heard too many horror stories about older siblings getting in the crib with the tiny baby or actually carrying the baby.  I guess I shouldn't have been quite so nervous about all of that.  When Will was at the hospital he liked looking at Ben and he thought the new baby was funny, but mostly he was interested in the hospital room and the big brother presents he was given.  Will was really fascinated by the many hospital ID bracelets I had to wear one of which was an IV.  I told him to not pull on my "special bracelets".  I'm telling you this because Will told Mamaw and Papaw that he wanted to go to the hospital to see mommy and her "special bracelets" and they thought that he was being so sweet and said he wanted to go see mommy and the "special baby".  I'm afraid not!  That kind of sums it up; he was interested in everything but the new baby.

When we came home from the hospital Will seemed to adjust okay.  We tried to give him extra attention and make sure he had his special time with us.  Will was curious about Ben but overall still pretty indifferent.  I guess I should say it was a pretty tough summer because I was still dealing with Bell's Palsy,  and I had a c-section so it took a little extra time to recover.  With that being said, we didn't see Will really warm up to Ben the first several months.  Will has never been mean or aggressive toward his brother (which I'm so thankful for).  He's mostly uninterested.

I noticed the first signs of change in Will and Ben's interaction when Ben became more mobile.  When Ben started crawling things improved.  Will could interact with Ben and I wasn't afraid of Ben getting injured.  Things kept gradually improving. Will was more and more responsive to his little brother.  The boys would laugh and even play together.  Ben, of course, has taken to the role of little brother and is constantly getting into Will's toys.

Now that Ben is a year and walking (more like running) everywhere and Will is three and a half years old, the boys are big buddies.  It's so much fun to see the boys play.  It was a rough first year, but I'll take a rough year for many years in the future of friendship between my boys.   The neatest change I've observed is how protective Will is of Ben.  He's constantly watching out for his little brother making sure he doesn't get hurt or wander away.   Will also has started calling Ben "My Little Benny."  Mark and I never call Ben "Benny", but how cute is it that Will has made up a nickname for Ben?  So precious!

I felt like sharing this because I'm so proud of Will, and to make others feel better if adding a new baby to the family hasn't been an easy transition .  I can relate.  Sometimes I feel like the mom you can relate to if you aren't perfect.  I have a lot of other blog posts just waiting to add to this topic, but that will be for another time.  Right now I'm going to be thankful for my two boys and the love they have for each other.