Disneyland was one of the final stops on our road trip.  Normally I would do a lot of planning for a day at Disneyland, but we had so much other planning for our vacation that it wasn't my main focus.  Since it wasn't our only destination, we couldn't give it all of our attention.  We read a few things online, but overall we went into the experience with a laid back attitude.  We didn't create a big hype or have crazy expectations for our day there.  In fact, I don't think the boys had any idea what we were going to see and do.  It was almost better for us to not have really high expectations because the day ended up being as close to perfect as I could have imagined.  We only had one day to spend at Disneyland, and we chose to spend our day in the Disney California Adventure Park because our boys are huge fans of the Disney Pixar Cars movies.  Instead of staying at a Disney-owned property, we stayed at Hotel Indigo in Anaheim.  It was near the park and we walked there instead of having to drive and find parking.

We woke up early on the morning of June 20th so we could get to the park when the gates opened.  .

As we walked up the main entrance "Zip-a-Dee-Doo-Dah" was playing on the loudspeakers and I actually got teary-eyed.  I was more excited than the kids at this point.  I know it sounds hokey, but Disneyland really is a magical place.

The day started off great when we arrived and the entrance line wasn't long.  When we were getting our tickets scanned we were upgraded to the Magic Morning pass to enter the park early.  It was our lucky day because the Magic Morning was to the California Adventure Park that day.  I couldn't believe our good luck!


Cars Land is like walking in the movie Cars.  It's amazing how they recreated the movie in real life.  It was awesome during the day and even more impressive at night with all of the neon. 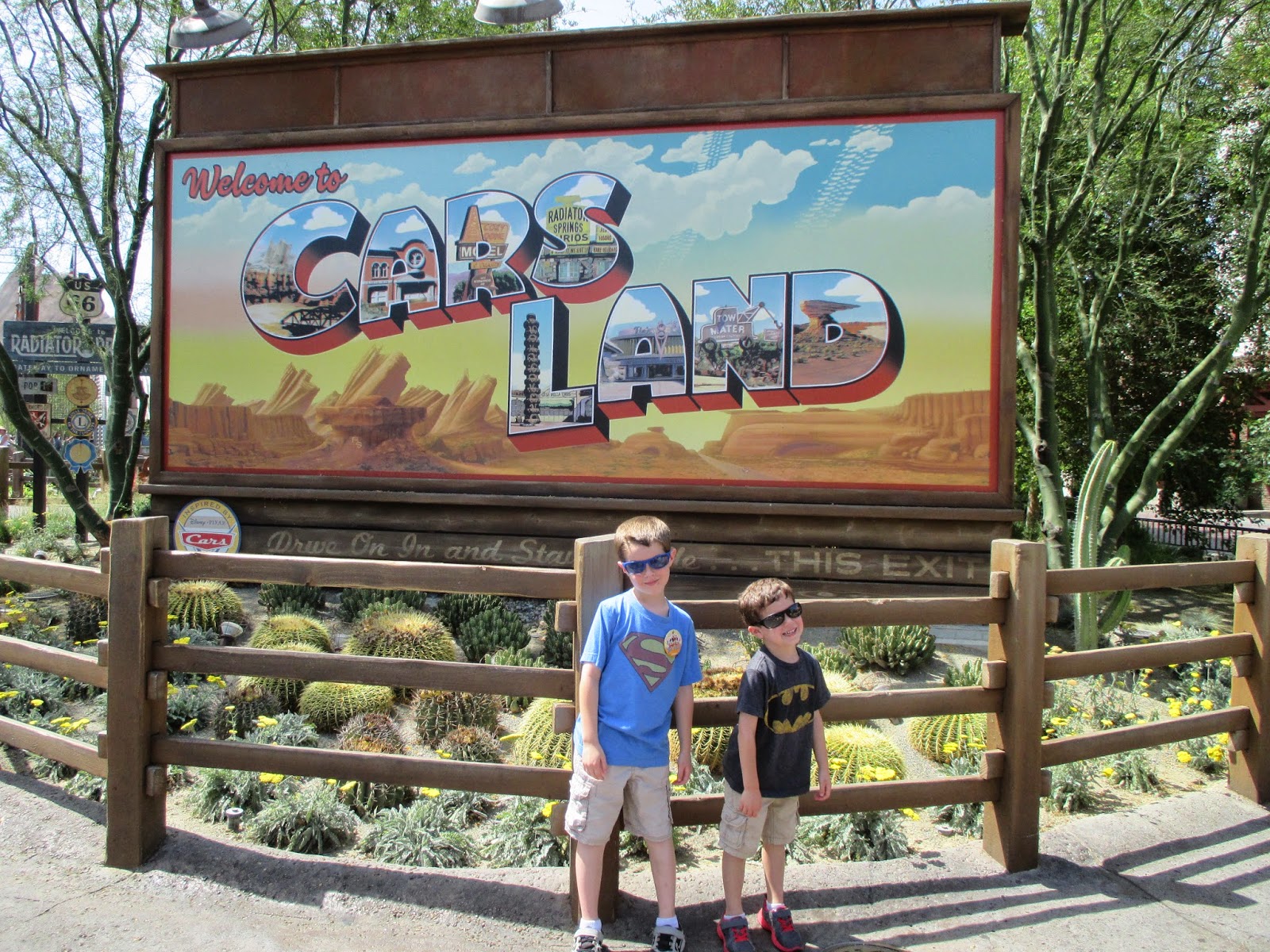 Since we were early in the park we took advantage of the bonus time, and we went straight to Cars Land so the boys could ride the popular Radiator Springs Racers ride.  The wait time in line for that is usually 95 minutes.  It was only about 30 because of the Magic Morning.  I never imagined that we'd get that lucky.  We also got the Fastpass for that ride for later in the day and our family rode it again.  Mark and Will even stood in line just before the park closed so they could ride it one more time. 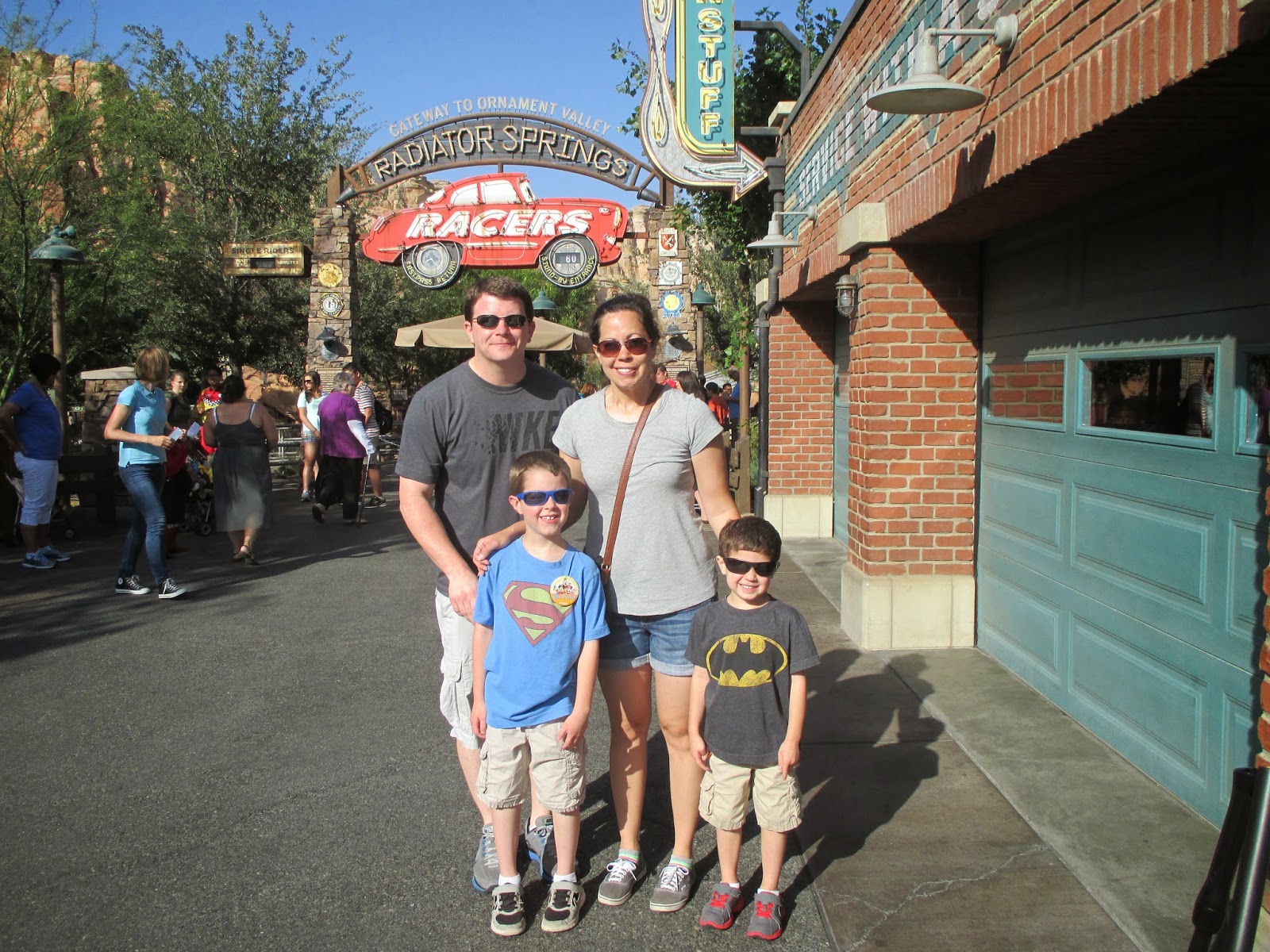 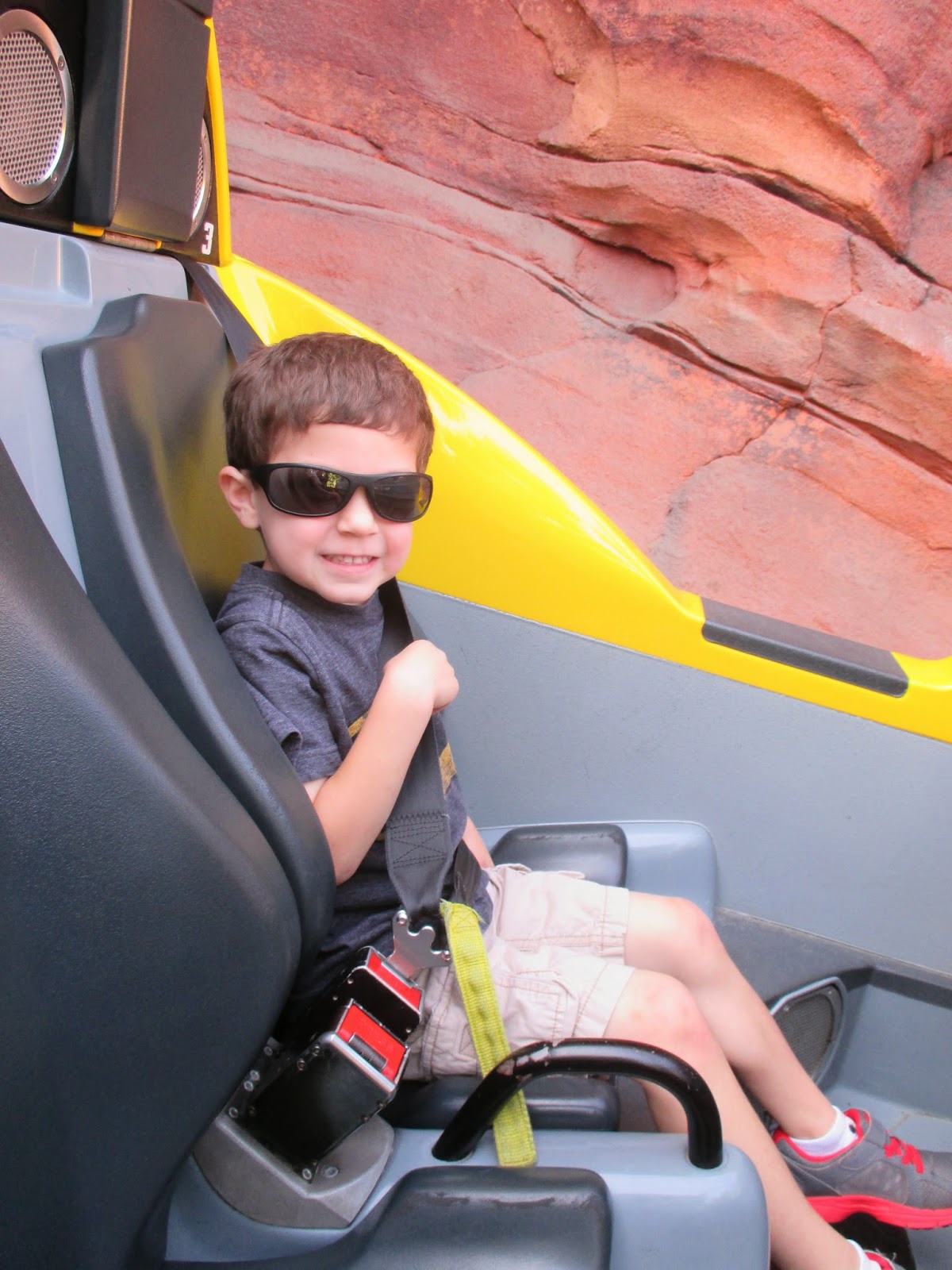 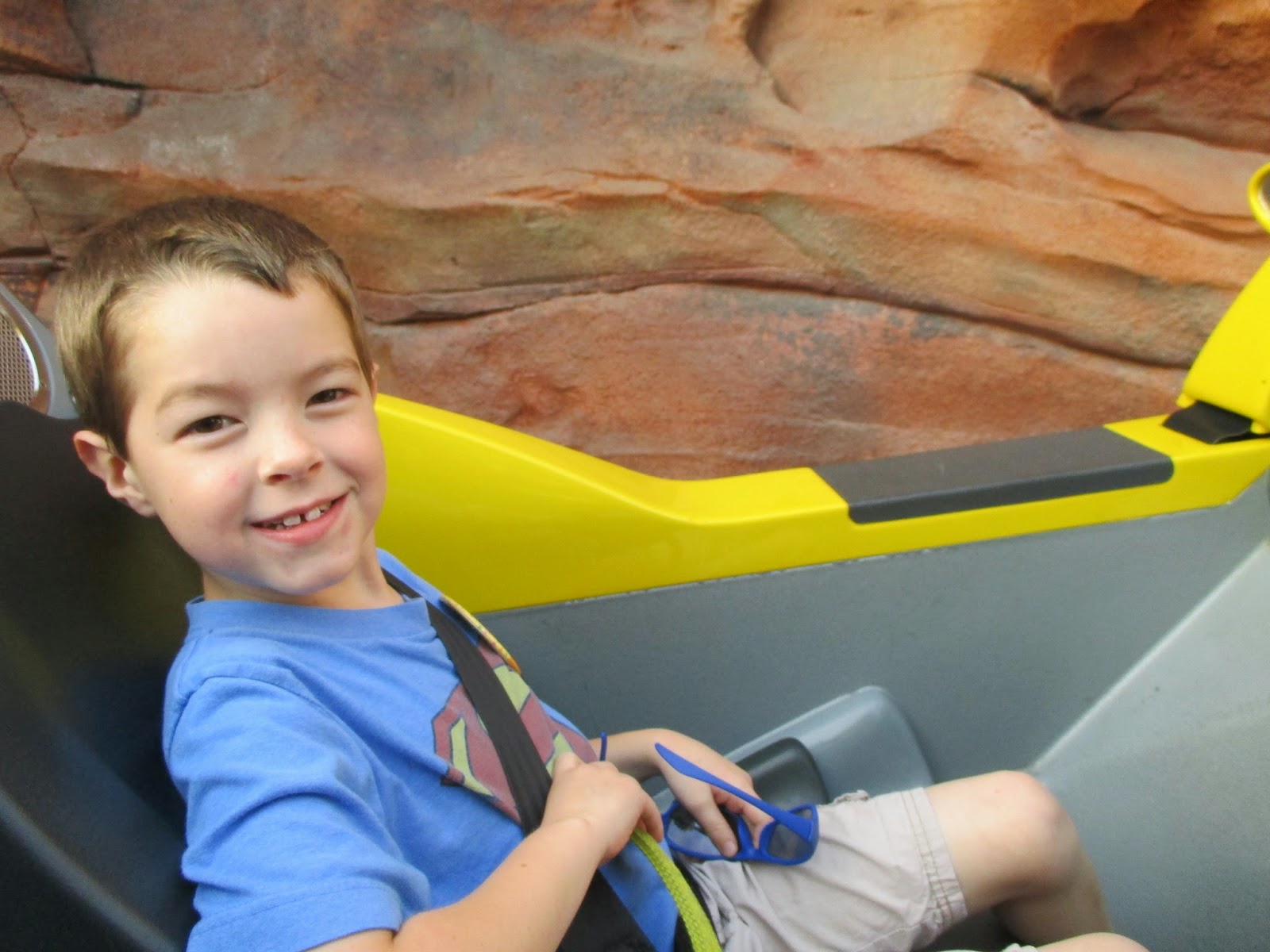 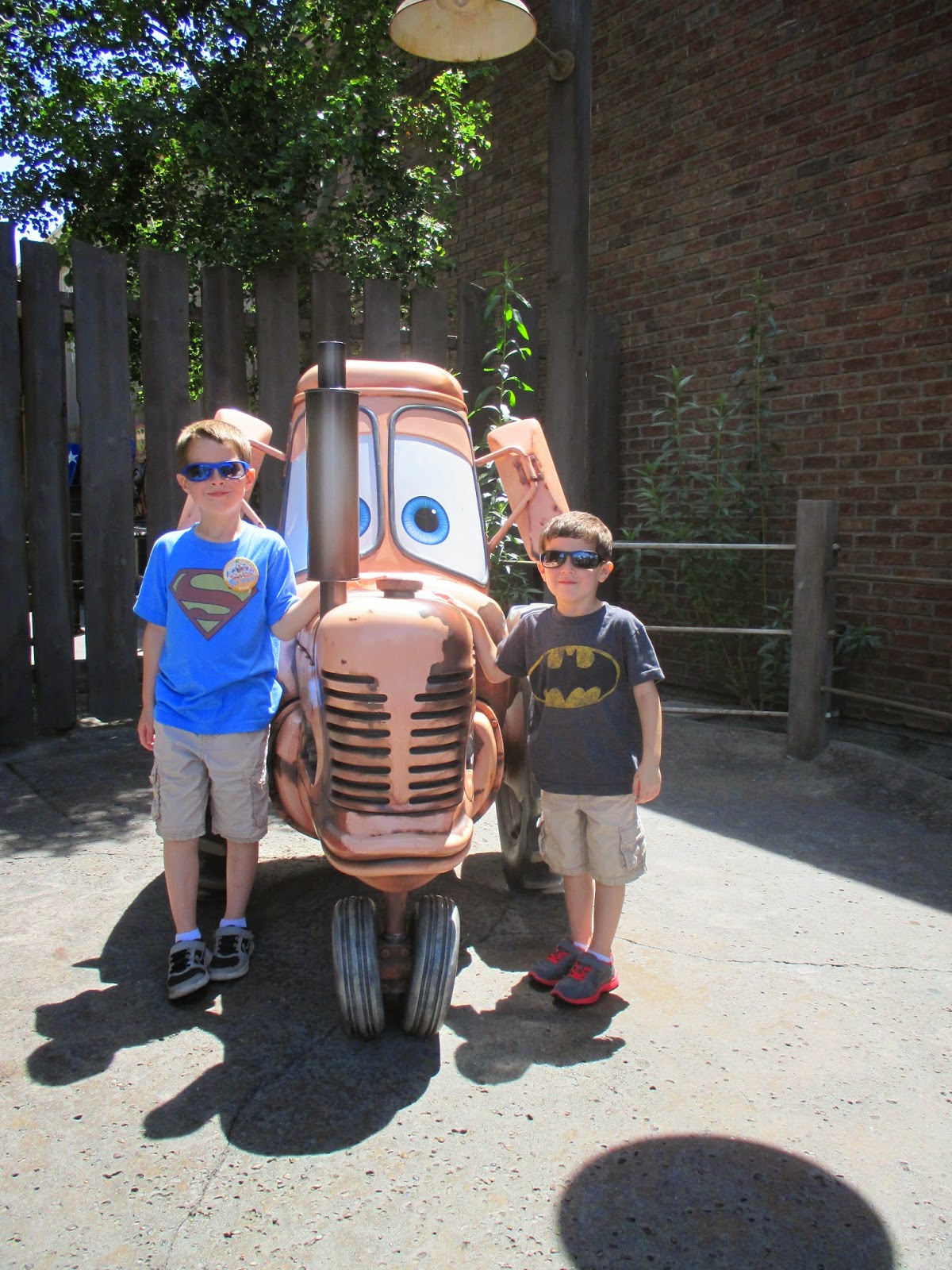 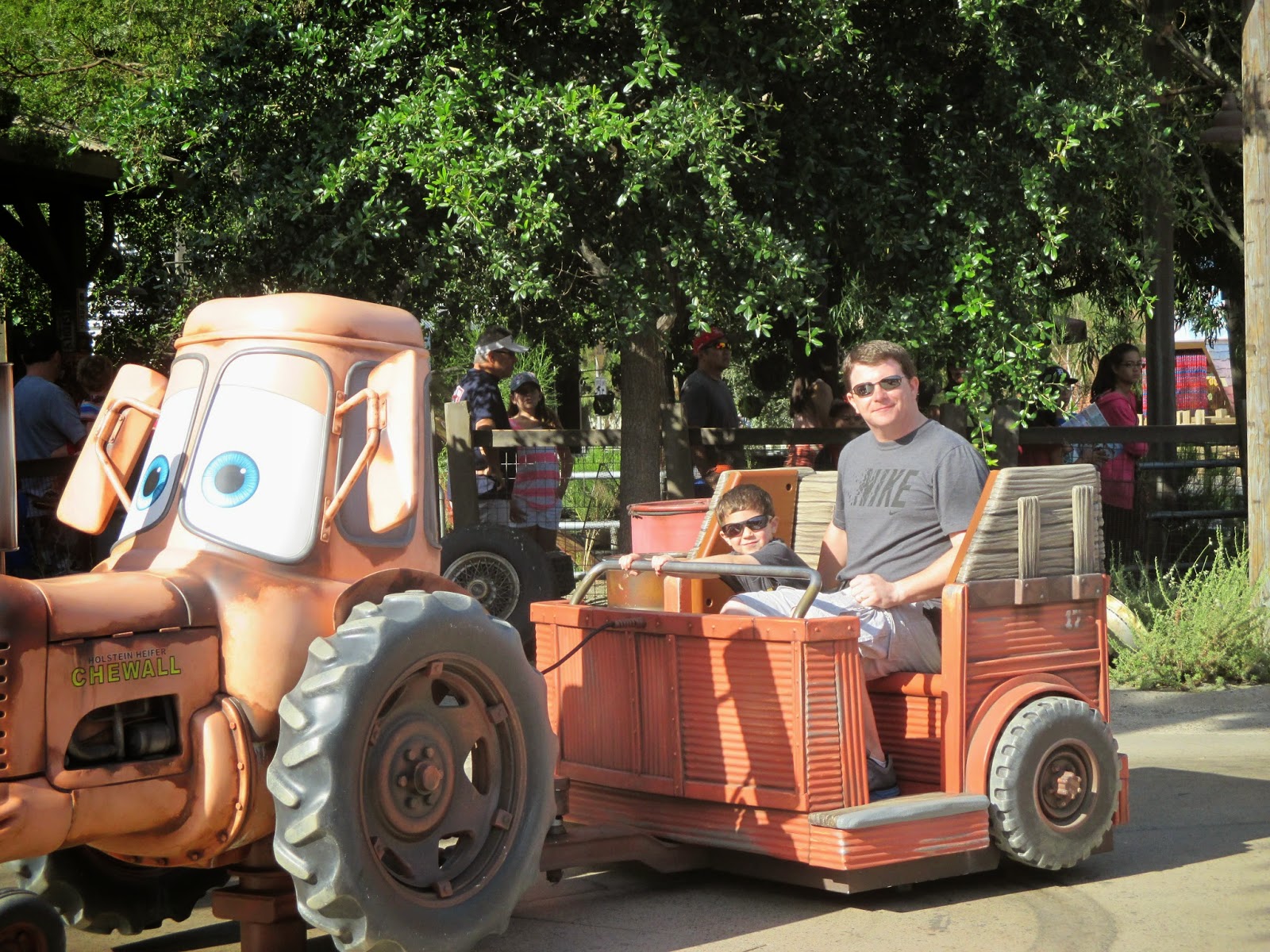 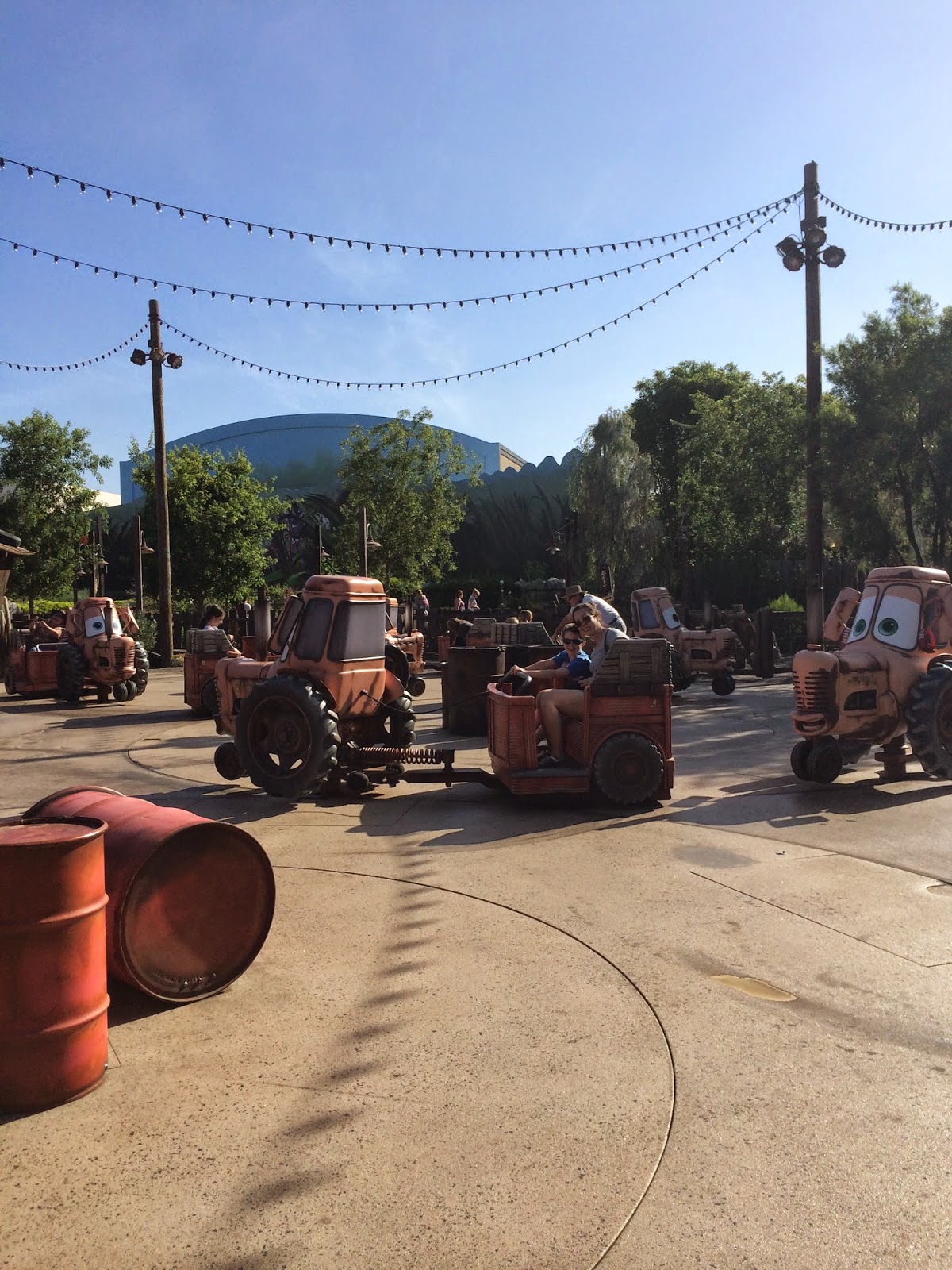 Luigi's Flying Tires
Cass Della Tires was like walking in Guido and Luigi's tire shop in the movie. 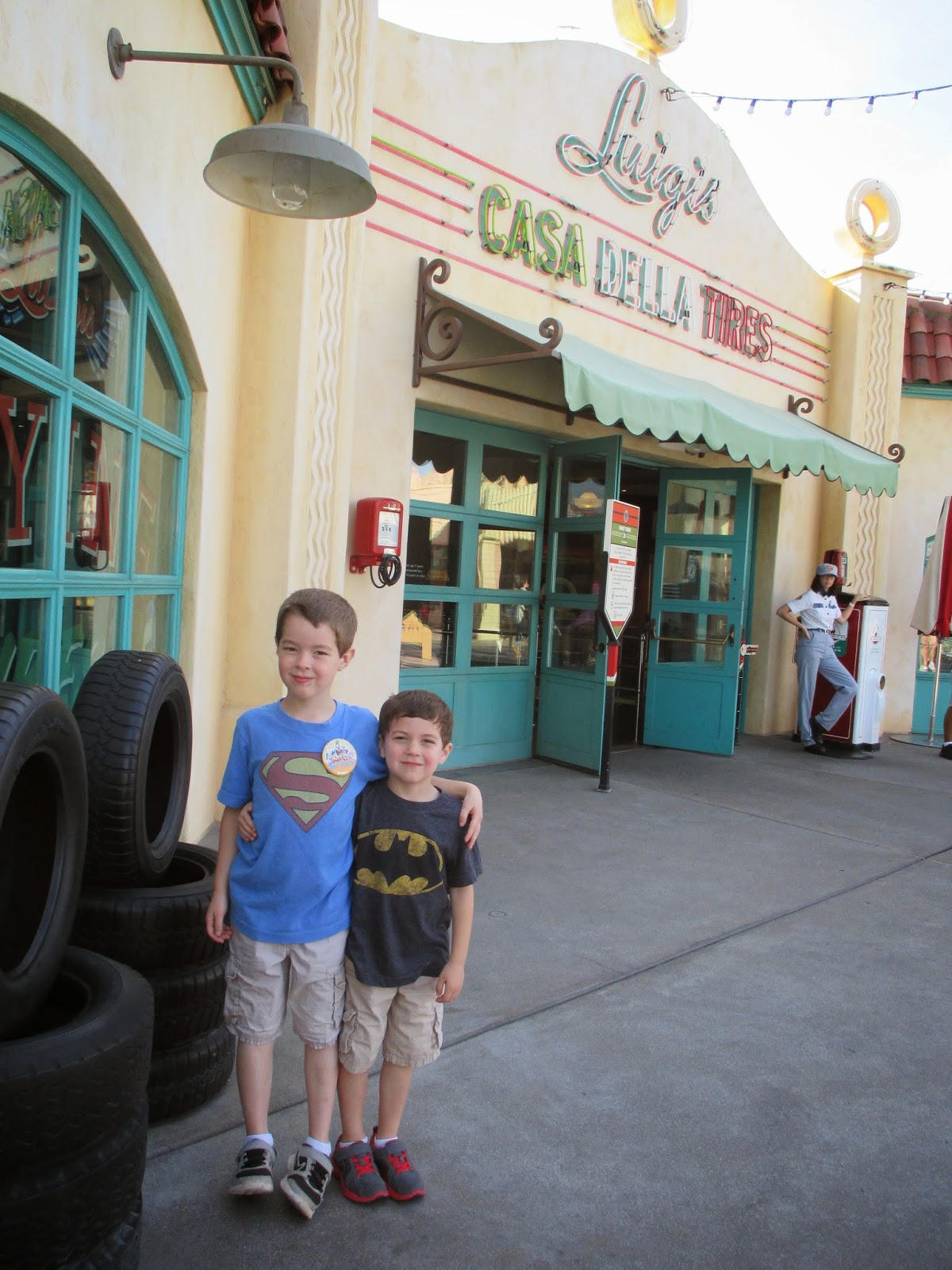 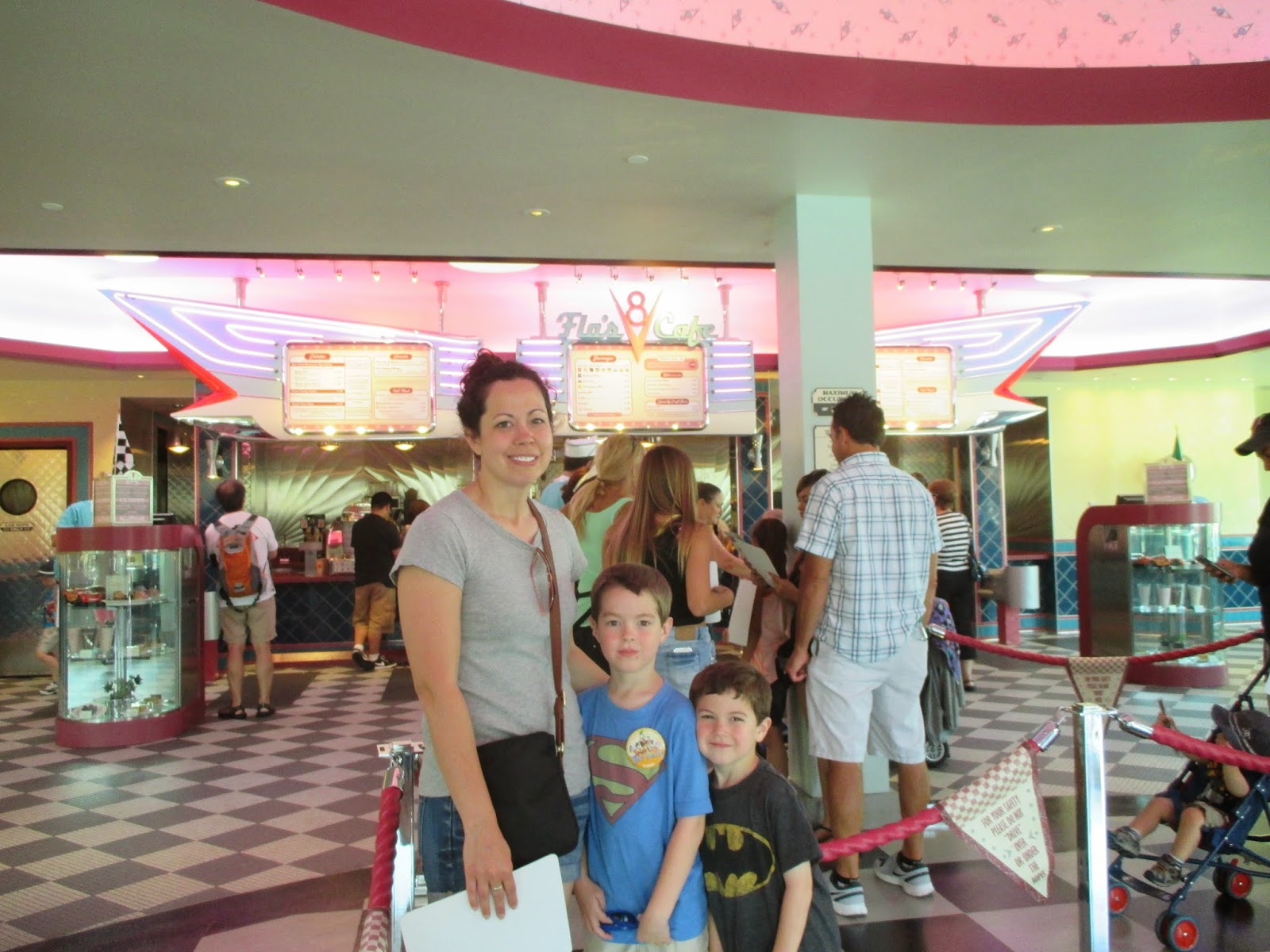 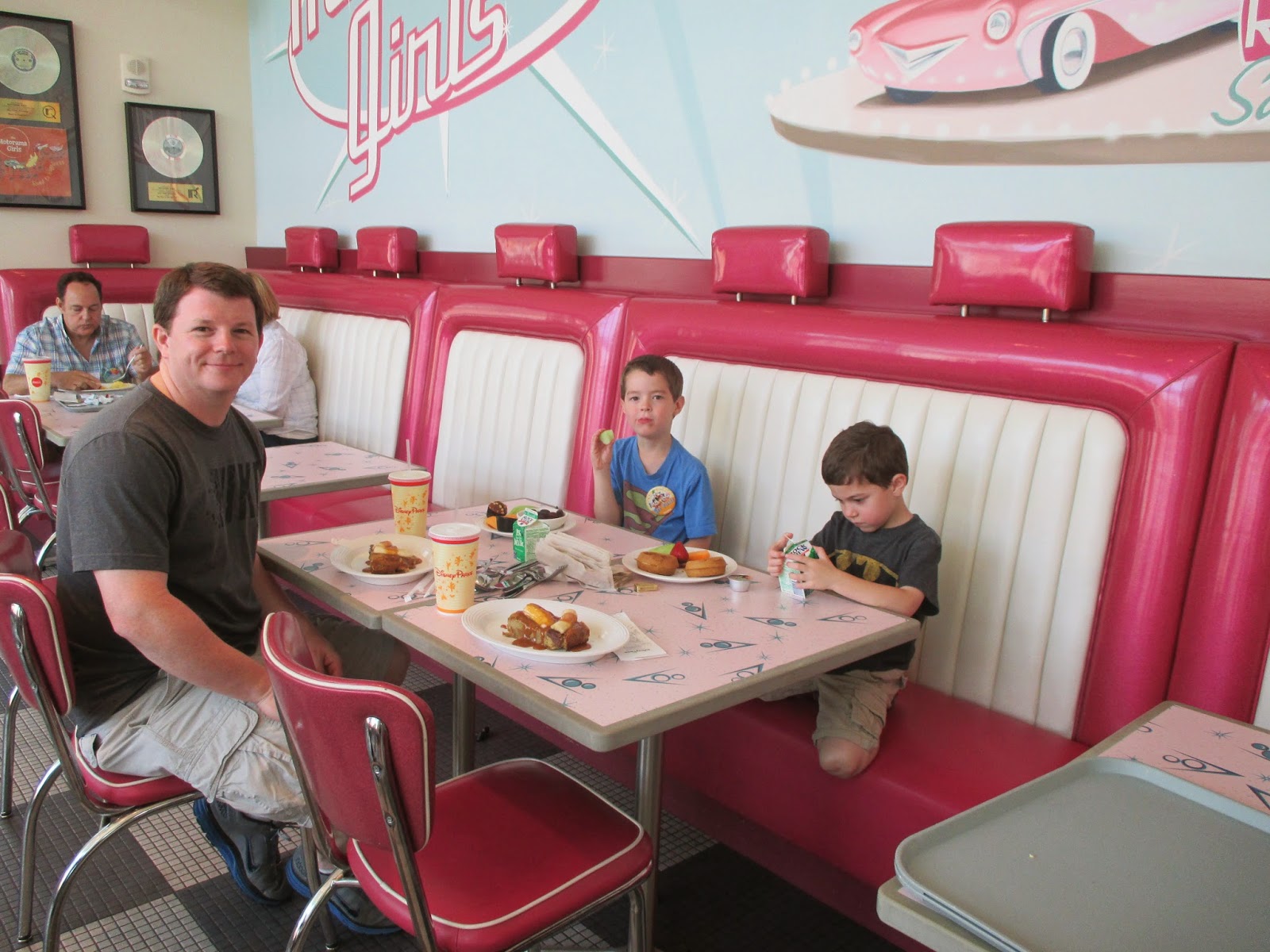 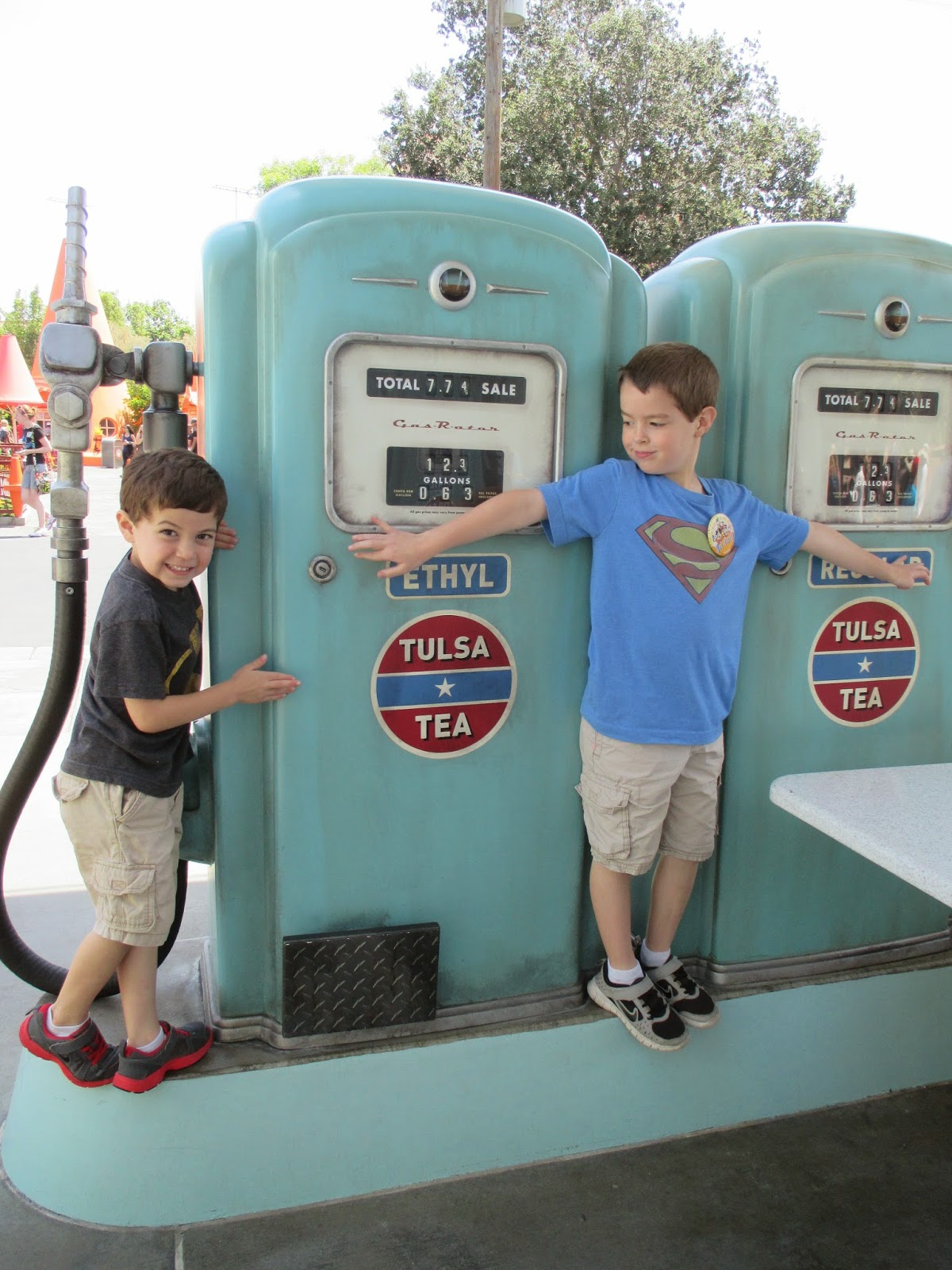 Grizzly Peak had the Redwood Creek Challenge.  The boys had a blast "earning" their wilderness explorer badges.  Here they are posing with Russell from Up after a really cute interactive show with other Wilderness Explorers. 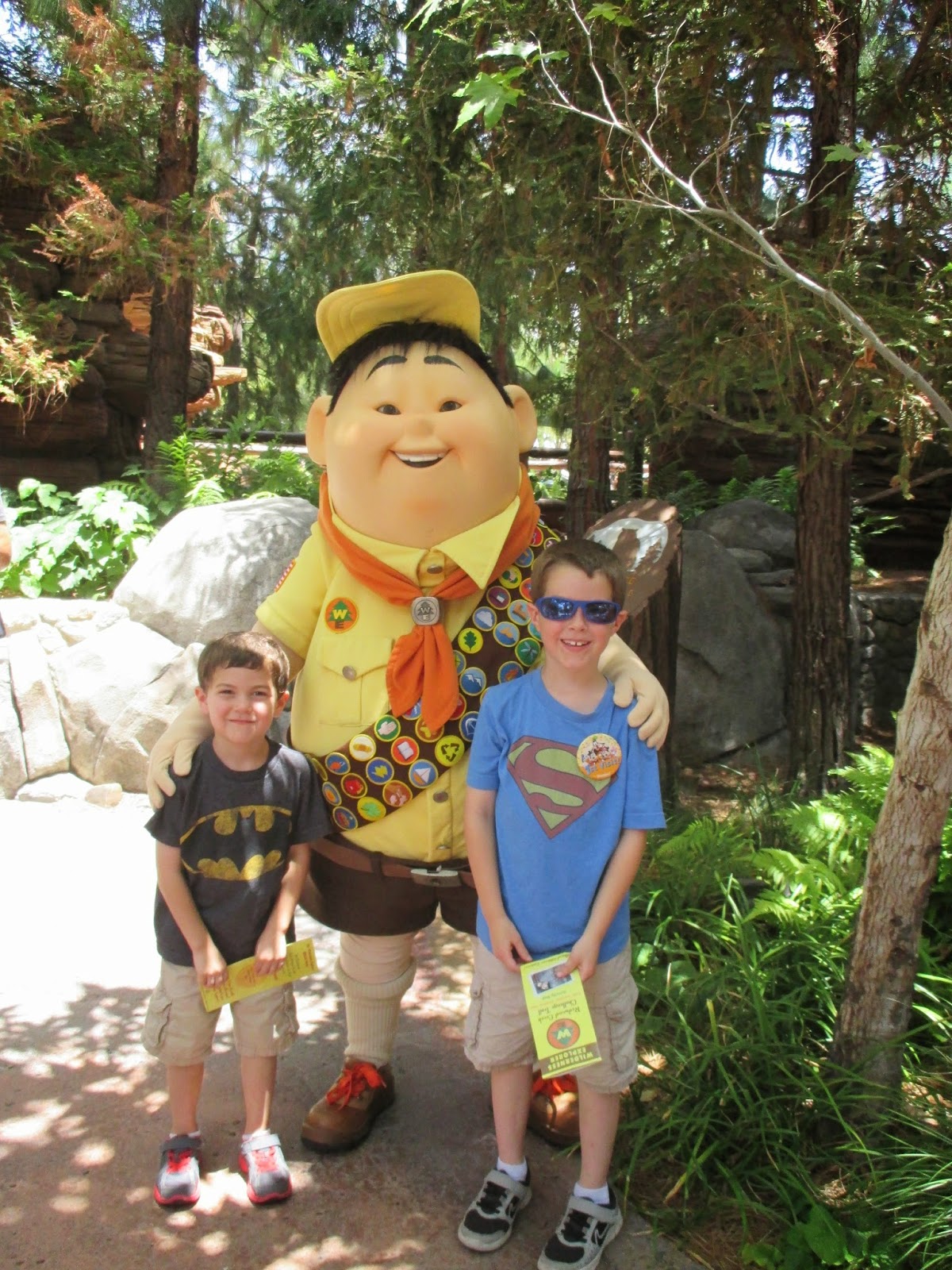 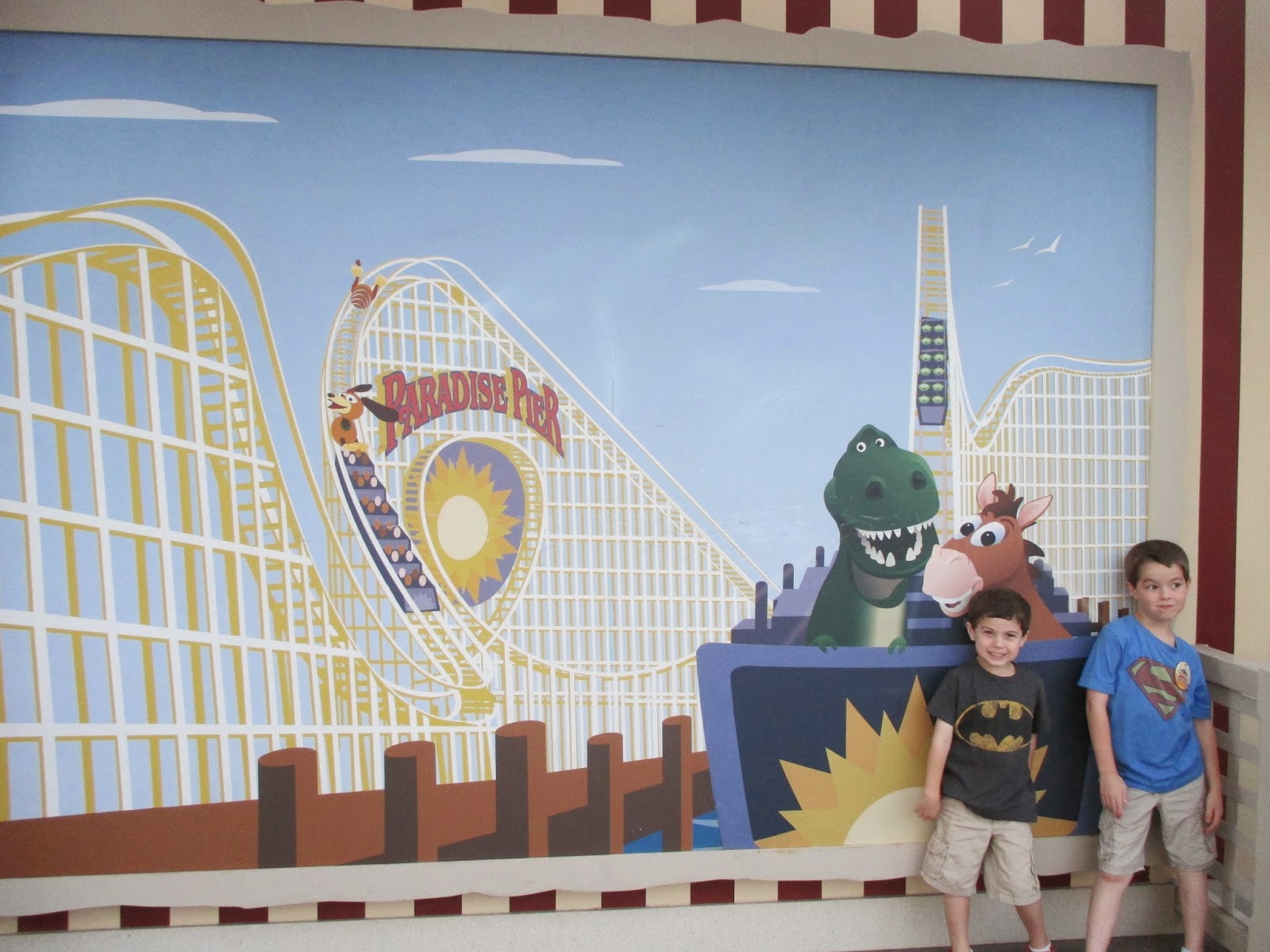 One of my favorite photos of the day. 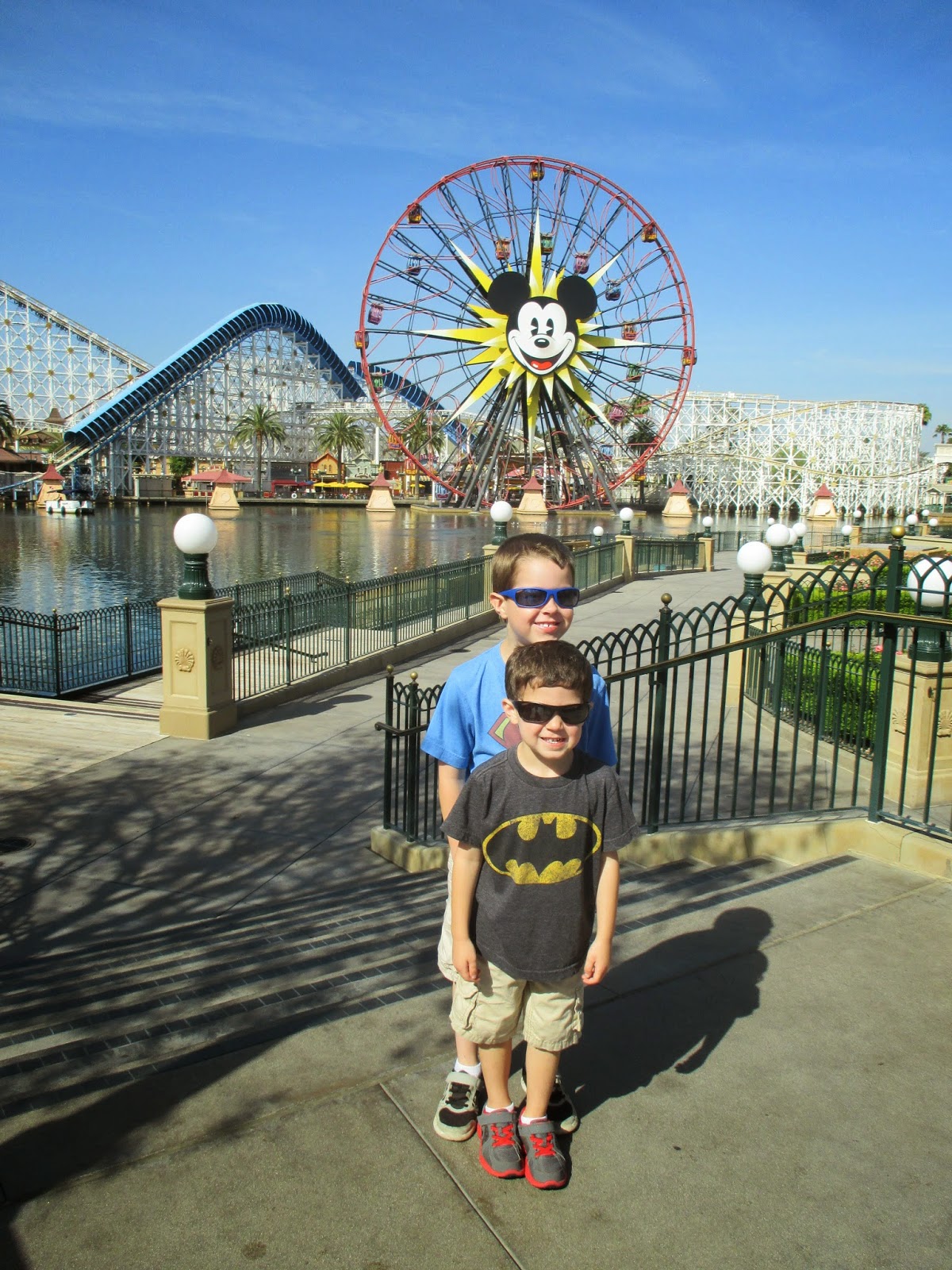 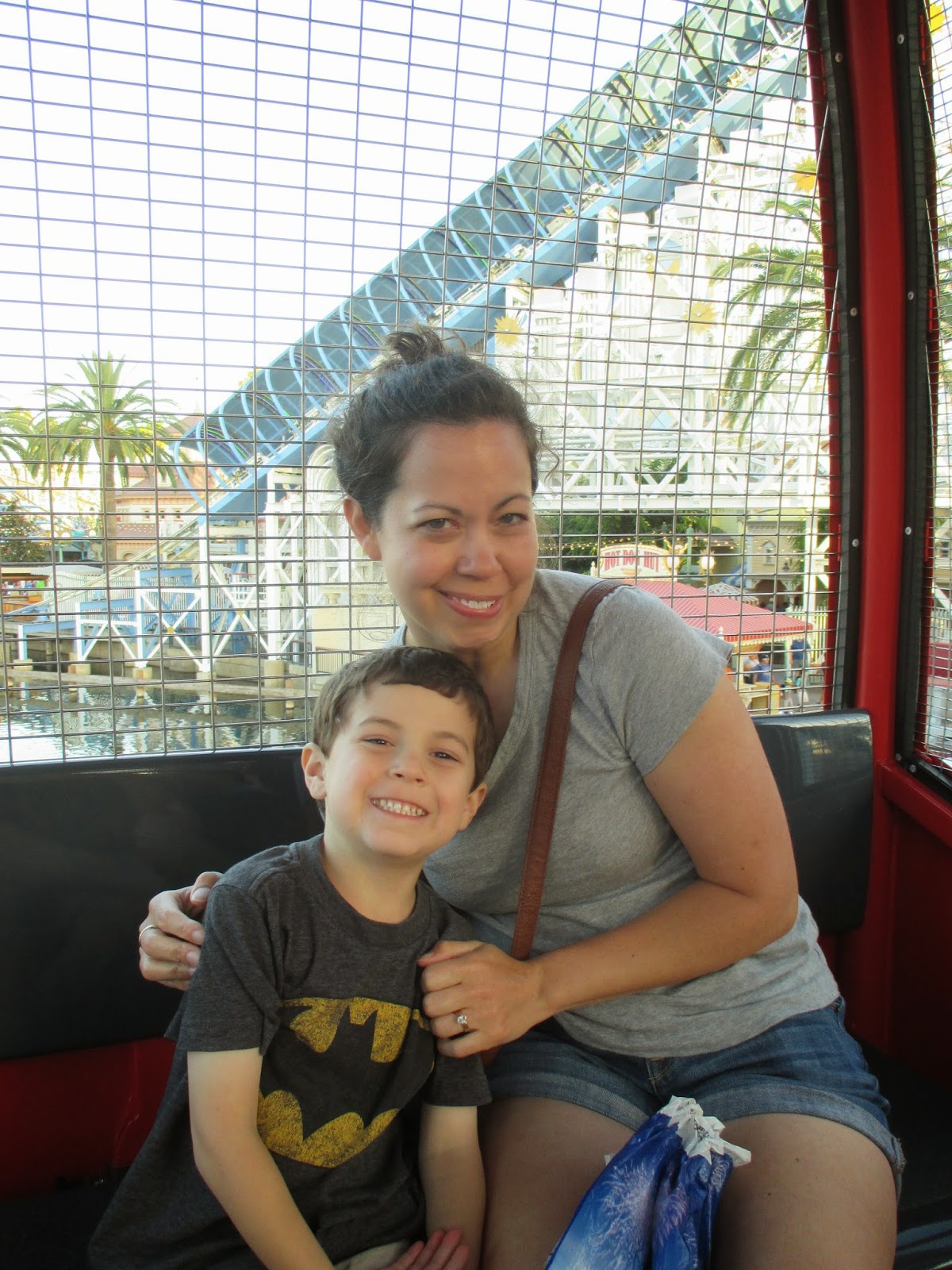 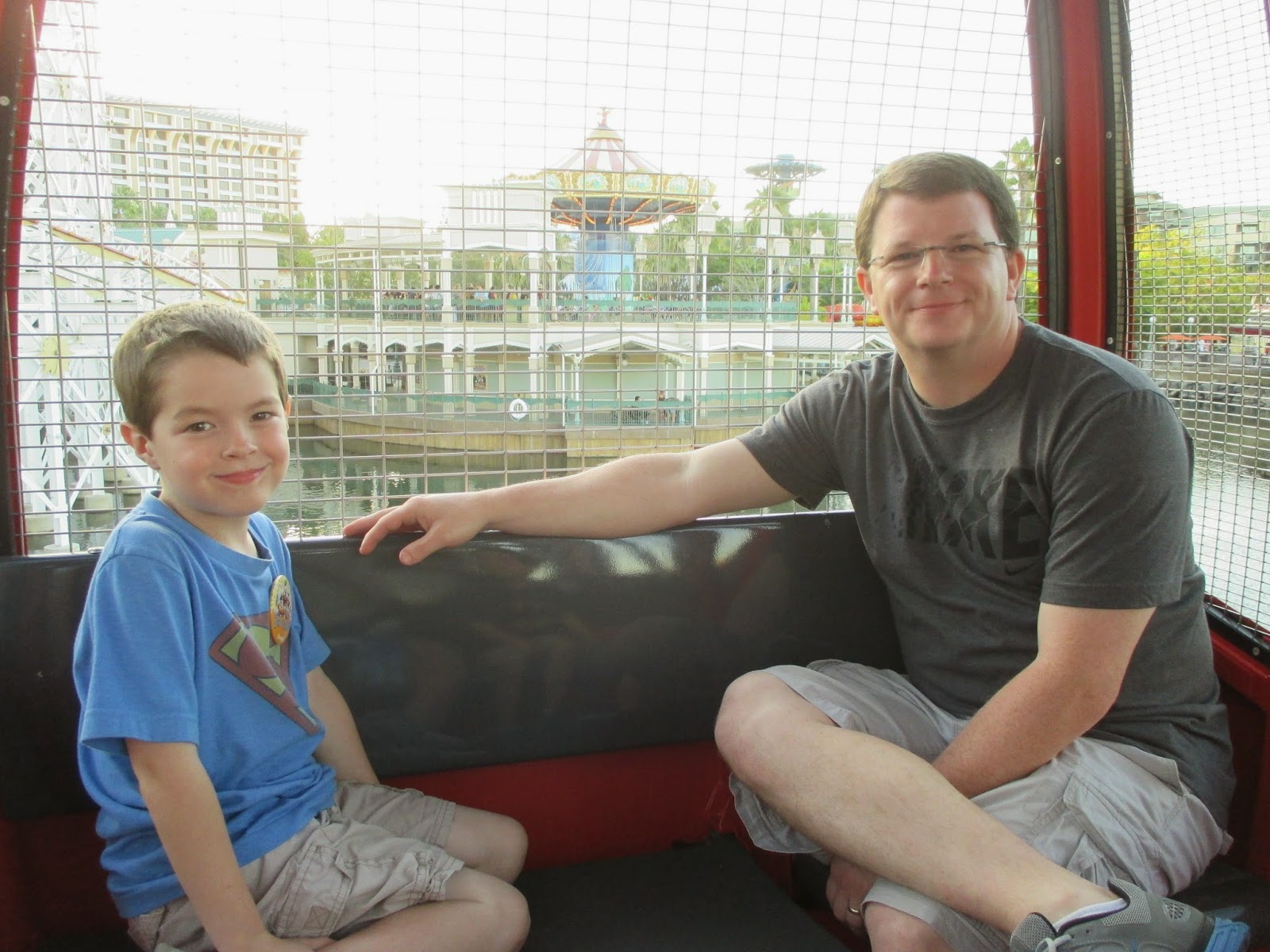 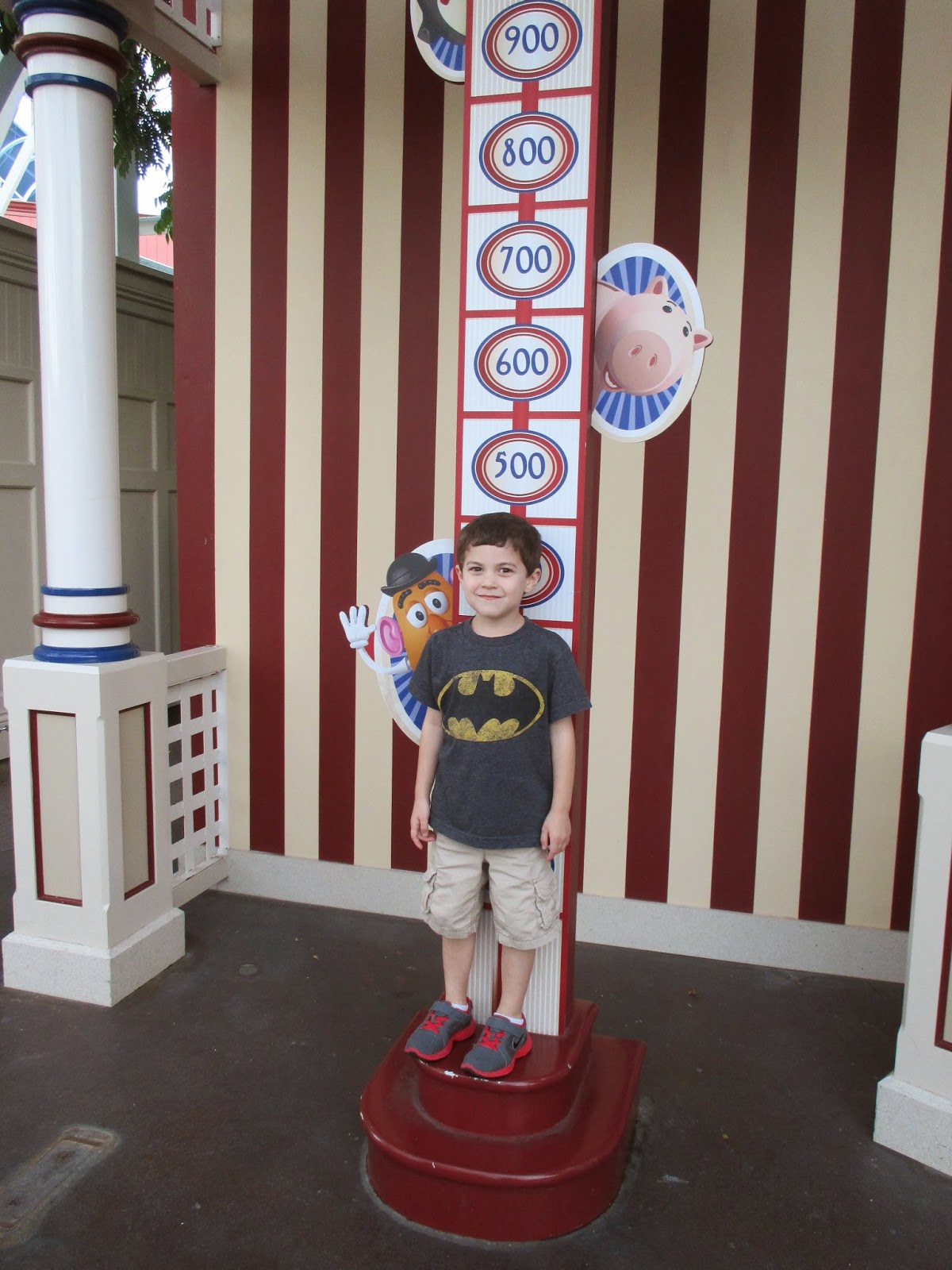 Soarin' Over California was one of our favorite rides.  We used the Fastpass for this one. 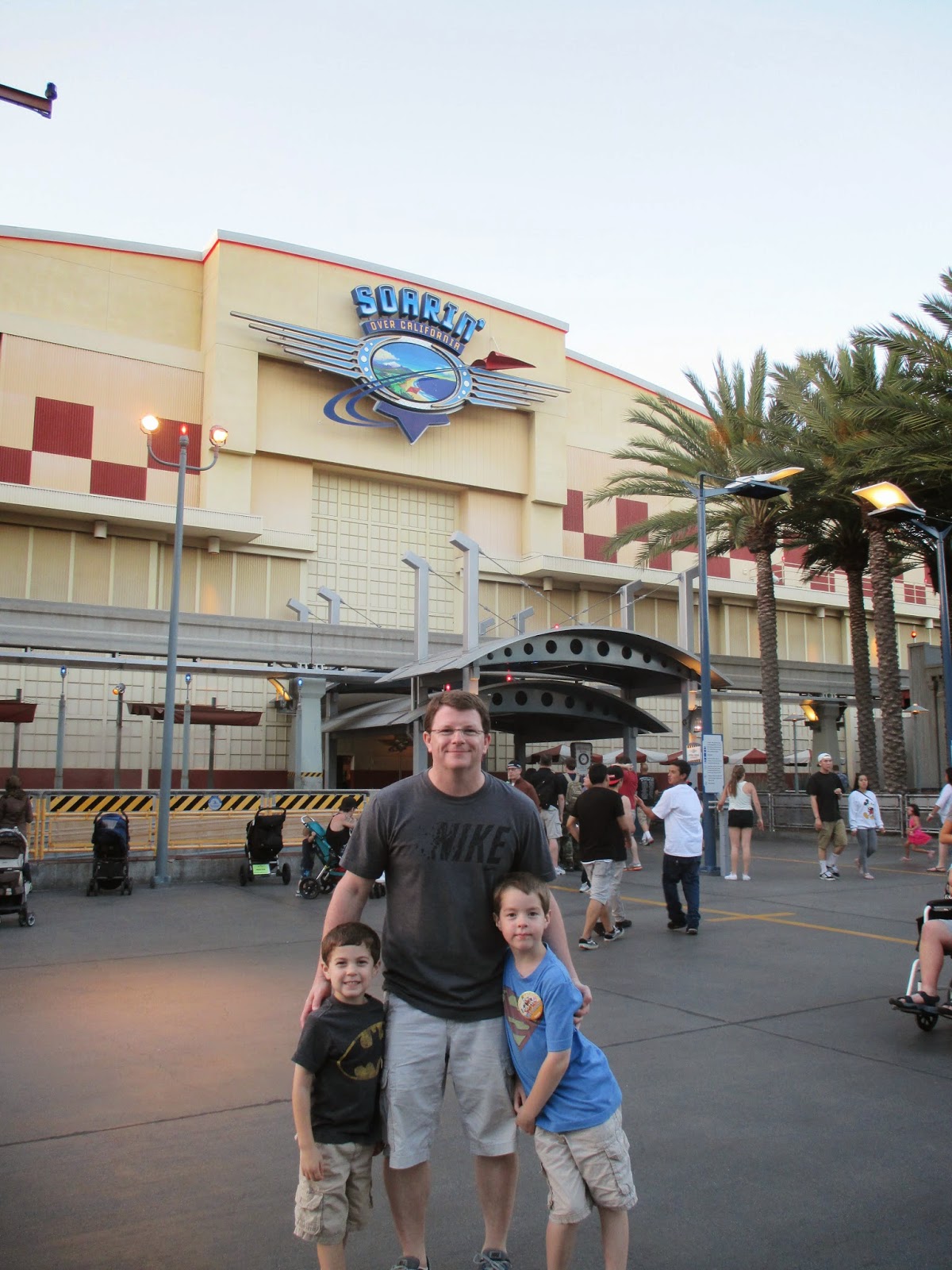 Shopping for souvieners in Cars Land.  This orange traffic cone did not come home with us. 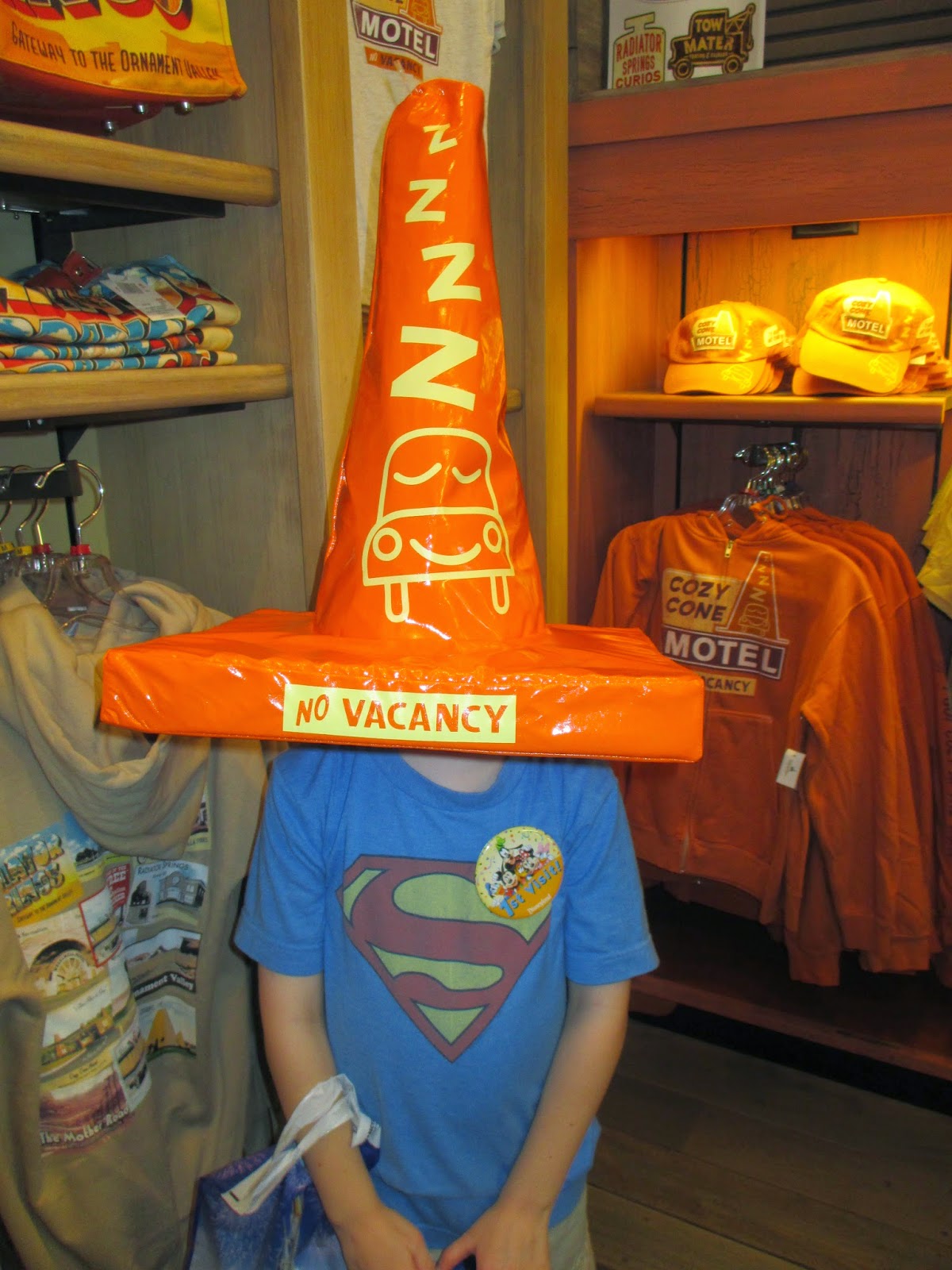 For their souvenir, the boys picked out a diecast car to take home.  Ben picked out a special Disney Star Wars Car and Will selected a very hard to find Tuners.  They were small and didn't take up very much space in the car (unlike the orange traffic cone above!). 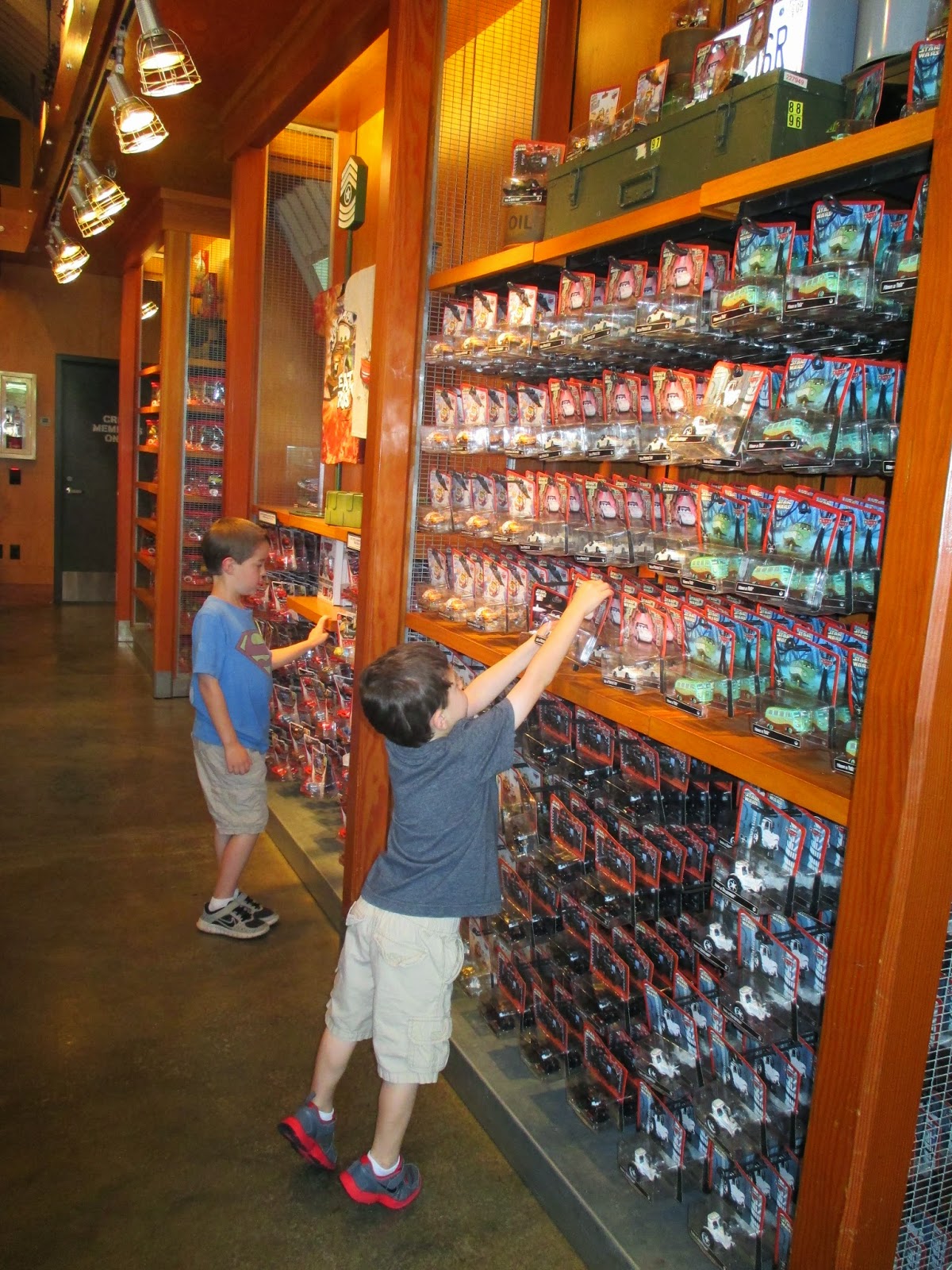 We stopped for a mid-afternoon ice cream cone at the Cozy Cone.  The best surprise of the day is when we realized that they offered free cups of ice water everywhere you could purchase food.  That saved us a lot of money.  Thank you, Disneyland! 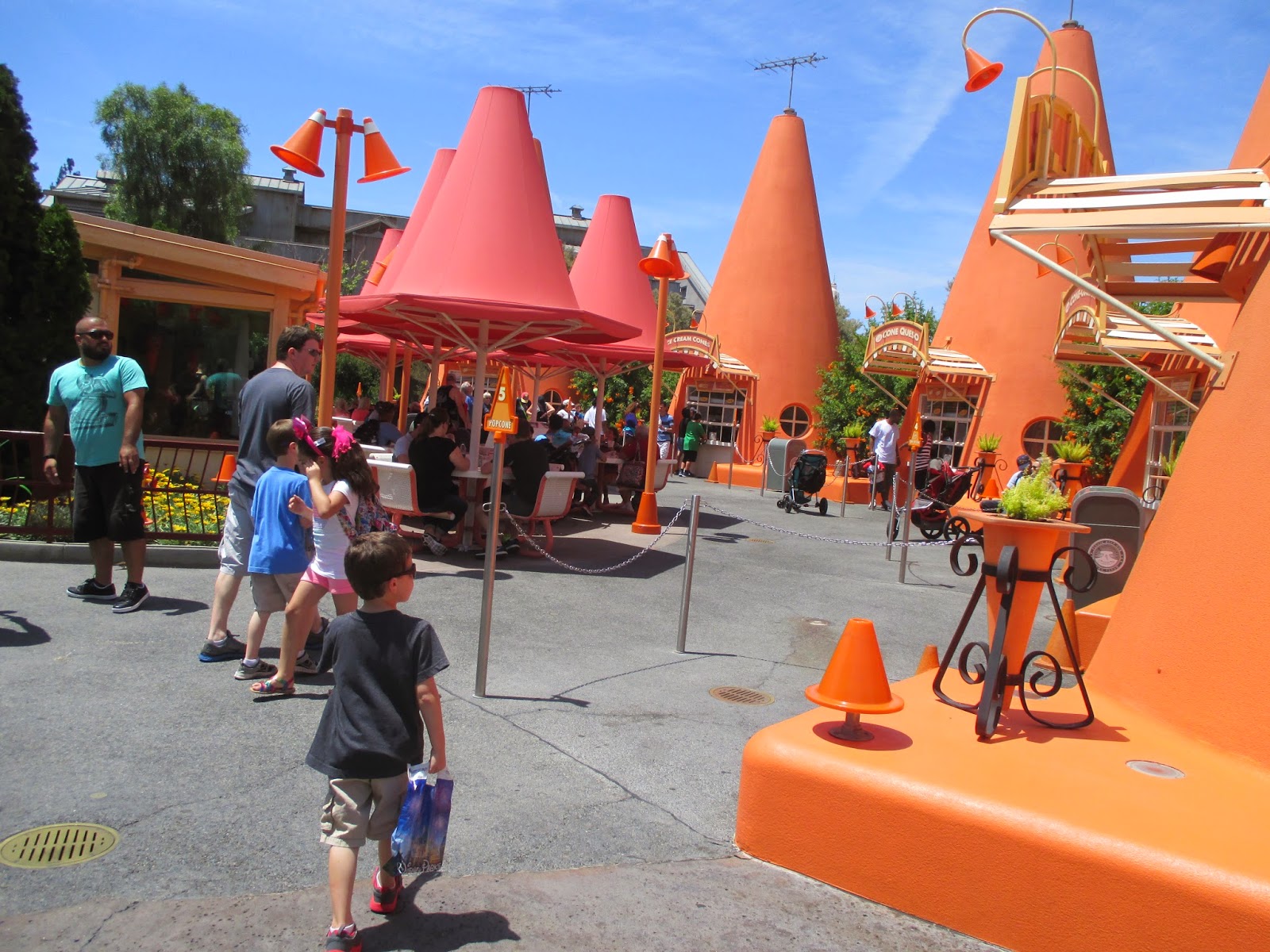 In "a bug's land" we saw Flik and rode Flik's Flyers, Heimlich's Chew Chew Train, and Tuck and Roll's Drive 'em Buggies (just like bumper cars).   We also saw the 3D film,  It's Tough to Be a Bug. 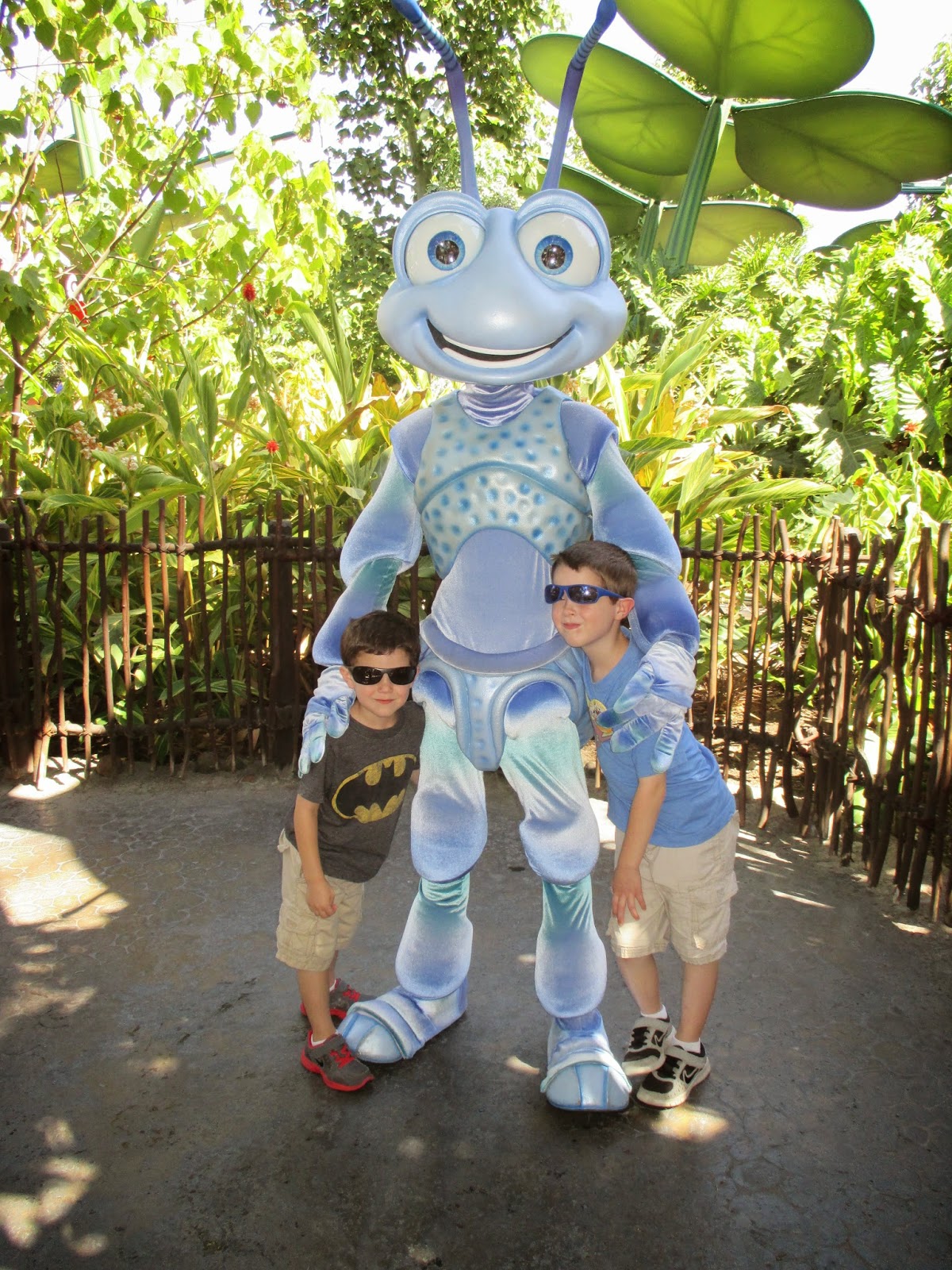 Monsters, Inc. and Monsters University are two of my favorite Pixar movies.  We stopped by this after we rode Monster, Inc. Mike & Sulley to the Rescue!  I think this is the cutest photo with the boys on the steps. 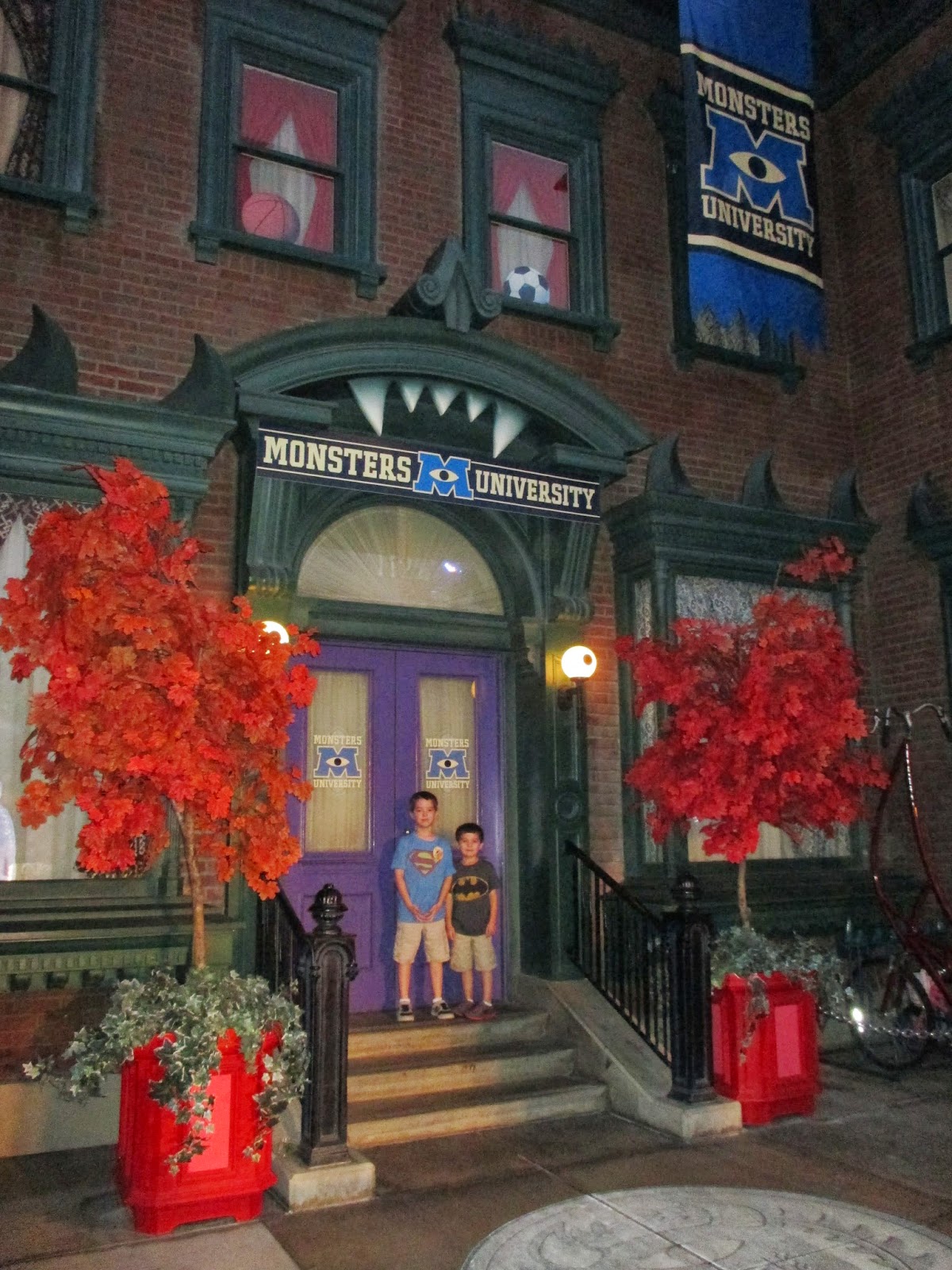 We ended the day where we started--Cars Land.  Ben said that Mater said, "Everybody is taking pictures of me!" when they were getting their photo taken beside him. 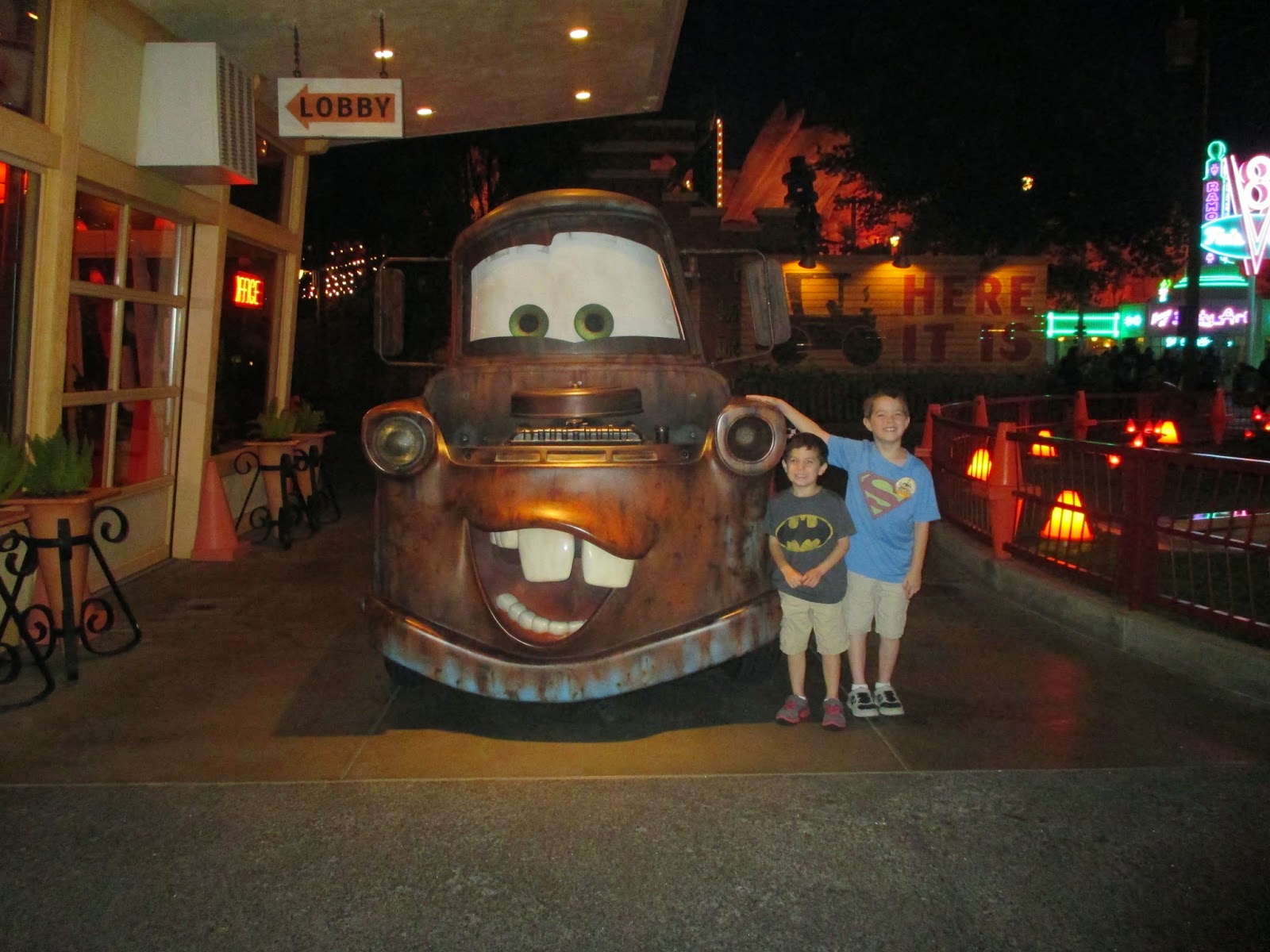 I can't leave out that we saw the musical Aladdin.  It was later in the afternoon and gave us the perfect break from all the walking.  We toured the Boudin bakery, too.   While Mark and Will rode Radiator Springs Racers to end the day, Ben and I chose to watch the fireworks.  Ben fell asleep before it was all said and done.  We were all exhausted, but it's the best kind of exhaustion.  It was a day full of fun.  Of all our days on vacation, this was one of our happiest.

Will and Ben loved Disneyland!

Will summed it up best when he said, "I don't ever want to leave!".

For advice on how to take a successful road trip with young children, make sure you check out my tips {here} at Unexpected Elegance.
Posted by Michele at 3:07 PM