Even The Pillow Pets Are Sick 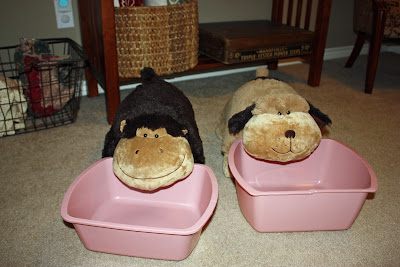 When the Pillow Pets are sick, you know you've had enough of the stomach virus for the year.  Will informed us that the Pillow Pets were sick and he had them with their heads over the pink hospital tubs that I keep around for times like this.
Ben has/had a stomach virus (he's acting more like himself this morning), which I thought might be the flu.  After sending out an all-call message on facebook for my mommy friends to tell me about flu symptoms in little ones, I don't think it is.  On Tuesday evening Ben threw up several times or as Will says, "spit up" and he felt terrible all day Wednesday.  He had a fever and was very lethargic.  Poor little guy! Yesterday we spent a lot of time on the couch cuddling.  Mark and I have taken turns holding him.
We ended 2010 and started 2011 with a stomach virus.  I wrote about it here.  On top of the stomach virus, we're having crazy cold weather in Texas.  It's been below freezing and in the single digits.  Very abnormal for us!  We cancelled school Tuesday, Wednesday and today due to the icy conditions.  I hate that Ben's been sick, but at least I'm able to be at home to comfort him.  Will's been a great big brother during it all and thankfully no one else in the family has had any symptoms or felt bad, except the Pillow Pets.

Here's Will taking care of the sick Pillow Pets. 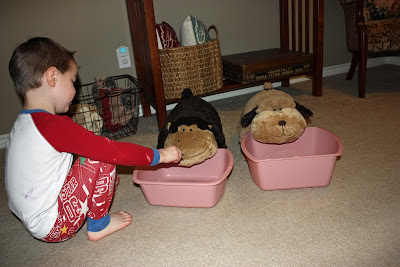 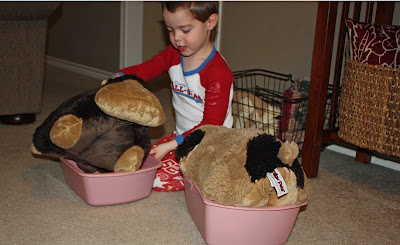 ﻿
Despite the sickness, I'm thankful for things like a warm house on a cold day.  Keep those who are suffering from the relentless blizzard in your thoughts and prayers.  I know several of my friends here in Texas have had power outages from rolling blackouts and it's much worse in other parts of the country.
Posted by Michele at 8:04 AM