Dreaming Of A White Christmas

After the boys tore open their gifts and played in the tent that Santa left them set up in the living room, Will asked the cutest question.  He asked, "Is it snowing on Christmas?"  Last year we had an unusual winter and received more than our normal amount of snow.  We even had a white Christmas!  So special for us Texans who aren't used to the snow.  Since last year was a white Christmas, Will thought all Christmases should have snow.  Too bad they don't.  Despite a "snowless" Christmas we still had a wonderful day and made some precious memories.  Mark and I say this every year, but we think this was the best Christmas ever.

The boys at the window looking to see if there's snow.
This is probably my favorite photo of Christmas morning. 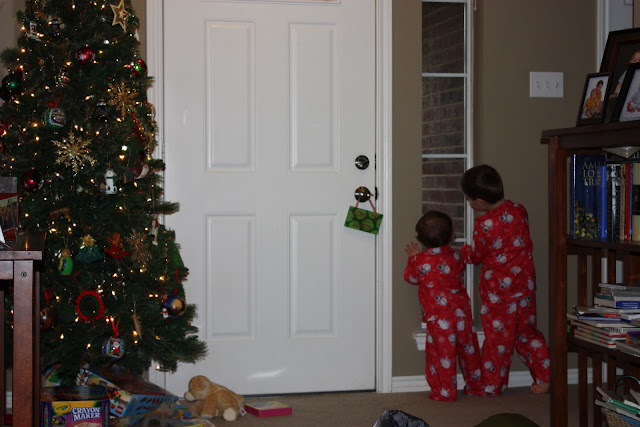 The tent!
Santa had a hard time putting up the tent in the living room without waking up Will and Ben.  It was a Christmas miracle that neither one of the boys woke up ;) 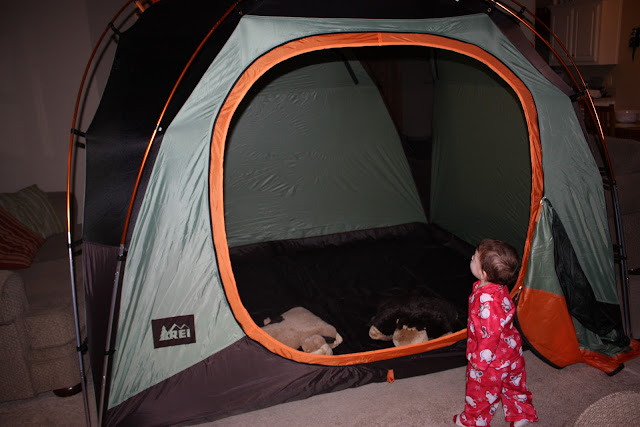 A few gifts were opened outside of the tent and several were opened inside the tent.
The boys received lanterns for camping. 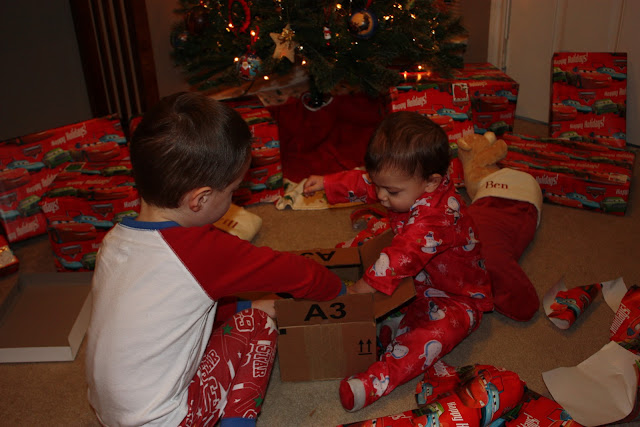 Will was so excited about the crayon maker.  I know it's for older kids, but he really wanted.  I promise we'll supervise closely.  The reason I'm showing you this photo is so you can see Ben in the background.  He opened the lantern and didn't want to look at anything else for at least five minutes.  He was all about his new lantern.  Best $5 that Santa ever spent! 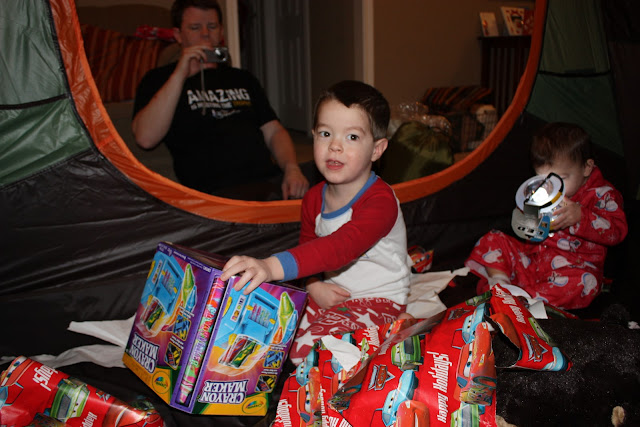 Will taking more gifts to the tent to open. 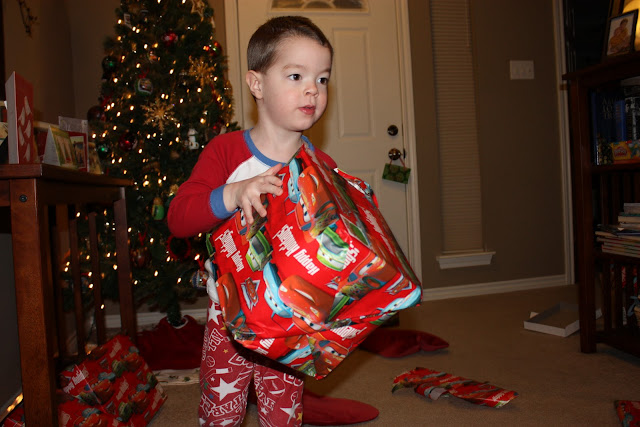 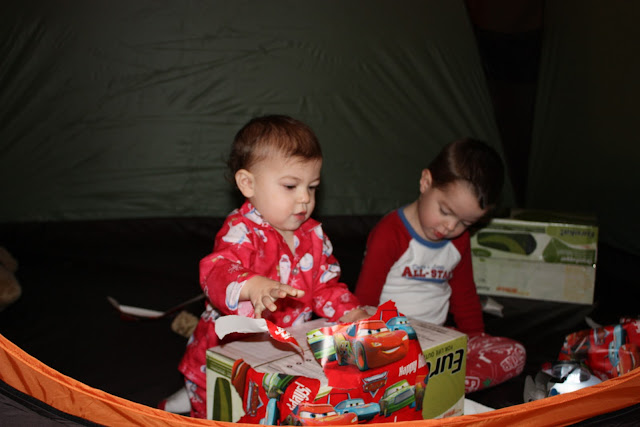 The TV was blocked by the tent so the boys had to watch their new DVDs on the portable DVD player.  They didn't seem to mind at all. 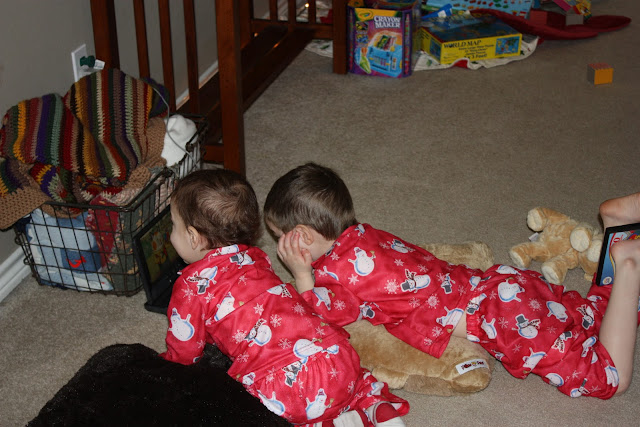 Ben was so excited this year!  Too cute! 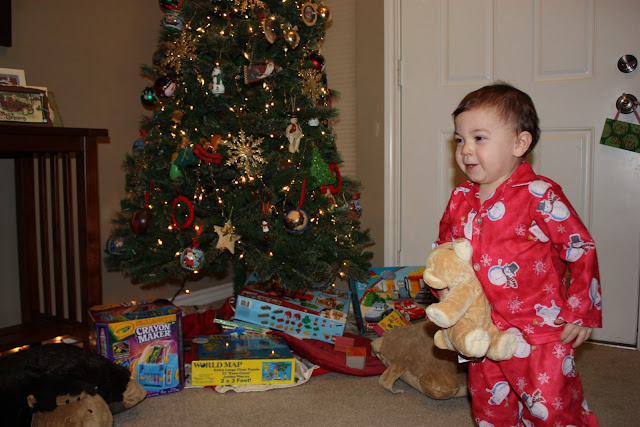 Will's Christmas pajamas that he refused to wear until we told him that he couldn't have any candy from his stocking.  It's no surprise that he agreed to put them on after that.  Yes, we're those parents who bribe our child. 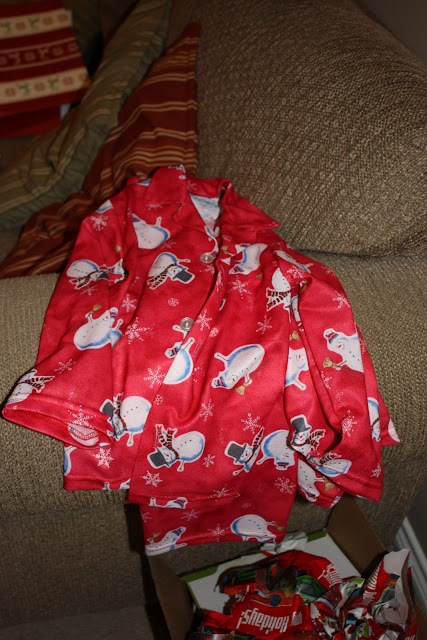 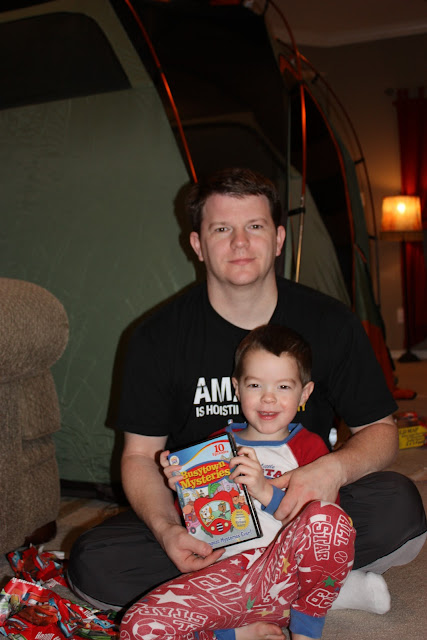 Papaw Jerry and Mamaw Carol stopped by on Christmas morning to see what Santa left the boys.  They posed for a quick photo inside the tent,. 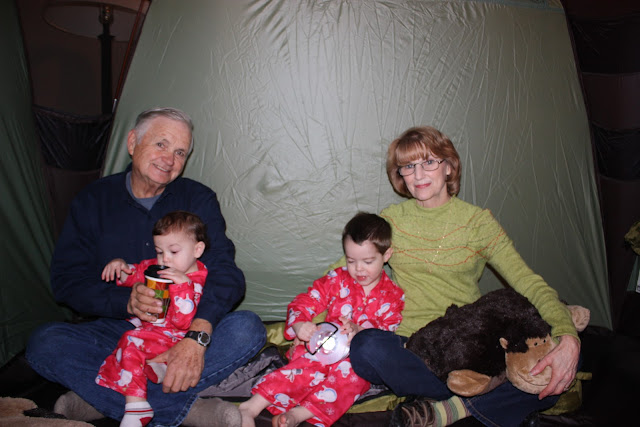 Papa Ralph had Christmas dinner with us.  He brought each of the boys a handmade rabbit.  A lady who lives down the hall in his assisted living home makes them.  Very sweet! 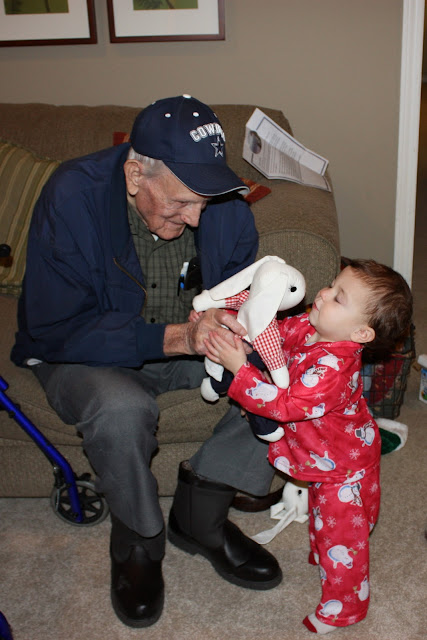 I hope this was the best Christmas ever for you and your family.