When you deal with the death of someone close you can't help but think about the afterlife.  As a Christian, I have the hope of Heaven.  I find peace and comfort in that, but I won't lie, it's difficult to have a complete and total understanding of such an abstract idea.  I know the Bible teaches about what we must do to have a home in heaven, but it's still hard to comprehend.  It's the unknown.
How do you explain the unknown?
I struggled with how to explain the death of my grandfather (who was like my father) to Will who is four.  Because Will is smart and observant I worried about how to tell him Papa Ralph passed away.  I worried that his death might create a phobia of getting sick, being in the hospital and nursing homes because Papa had been sick, he'd been in the hospital and the nursing home.  I worried about creating a fear of going to sleep.  I worried so much on top of all of the grief and sadness.  I decided to seek advice from a couple of older and wiser individuals.  There's a lady at my church, Kathryn, she's a mom to grown children who are all faithful Christians.  I figured she and her husband have done something right so I trust her advice.  Kathryn told me to answer questions as Will asked them and don't overdo it.  She said kids ask what they want to know and sometimes we can overly explain something and make it more complicated.  I liked the simplicity of her answer.  That's the approach I took.
We found out early in the morning of September 22nd that Papa Ralph passed away.  That was a Thursday, and I didn't tell Will until Sunday.  I needed time to grieve and process all of my feelings.  I wanted to make sure that I was thoughtful and calm when I talked to him.
On Sunday we went to visit my grandma in the nursing home.  Ben had asked for Papa Ralph all day long.  He's only two so Papa Ralph was just a part of our normal visitation routine and he didn't understand why he wasn't with us when we visited the nursing home.  Will, on the other hand, knew Papa had been sick and still thought he was in the nursing home, which was different than the one where my grandma lives.  As we were leaving the nursing home, we were holding hands and walking to the car and I told Will .

I said "Papa Ralph has passed away. He doesn't live on earth anymore. We can't visit him at his assisted living apartment, the hospital or the nursing home. We can still talk about him and look at pictures of him if we miss him."

I think that's all I could say without crying.  Will never said a word.  He was very quiet and deep in thought.  He got into the car and sat very quiet.  I would turn around and check on him.  I told him that I loved him.  He never said anything.  I think he was processing it all.  I'm sure the events of the last several days finally made sense.  After several minutes, he finally said something.  He asked for some gum because I'd promised him a piece if he'd be good at the nursing home.  That reminded me that he's still four, and it brought a smile to us all in such a sad moment.
In the following weeks, we'd mention Papa Ralph and Will would say he doesn't live on earth anymore.  He also noticed that people sent plants and flowers.  He said, "When people don't live on earth, you send plants to them."  Funny observation.  He's also noticed that sometimes I cry when I'm sad.  He's cautious when he talks about Papa Ralph, but he has talked about him passing away.  I try to make an effort to talk about Papa because I want Will to know it's okay to still talk about him and remember him.
About a week ago, Will was sitting in his room reading his A is for Astronaut book.  When he got to letter E it showed a drawing of Earth.  He stared at it for a very long time.  He pointed to the black surrounding the earth and said, "This is not earth.  This is where Papa Ralph is.  He is in heaven."  Whenever he reads that book, he says "Papa Ralph is in heaven."  I reassure him that Papa has gone to be with God. 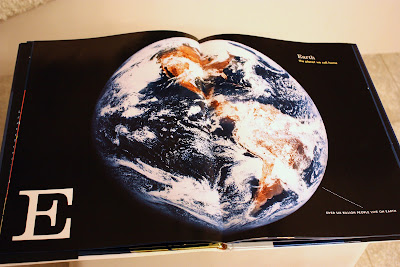 I took this photo of Will last night looking at his book.  He said the same thing when he got to the page with Earth. 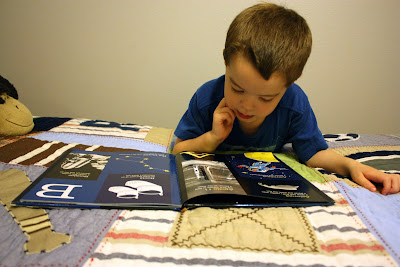 You can see he is pointing the black area "Heaven" as he calls it. 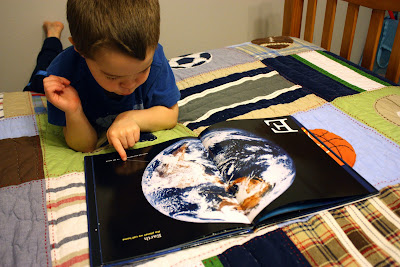 I'm not sure what Will comprehends.  Sometimes I think it's a lot more than I give him credit for.
I'm not sure if we did things the right way, but we did the best we knew how at the time.
Dealing with death is difficult, even more so when it's someone you are very close to.
We've taken the boys to funeral homes for viewings (or as we call them family nights/visitations).  We've also taken the boys to at least one funeral., but we have not ever had someone so close pass away.  My boys spent a lot of time with Papa Ralph.  We saw him almost every week.  My fear in the entire situation was that Will was old enough to understand what was going on, but too young to comprehend it all.  I didn't want him to infer things that were not right and have unhealthy fears or phobias of death because of it.  Of course, it's okay to be sad, but it's also important to know that death is a part of life.  A very difficult part of life, but it is how God has created us.
For all of my worry, things have been okay.  Will has been okay and I think has a better grasp of losing Papa than I imagined.  Will's simple observations have been a comfort.
I never imagined that a book not related to death and dying would have been what Will needed to make the connection between Papa Ralph passing and the afterlife. 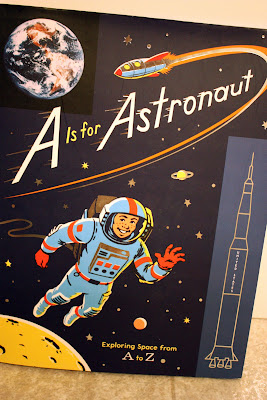 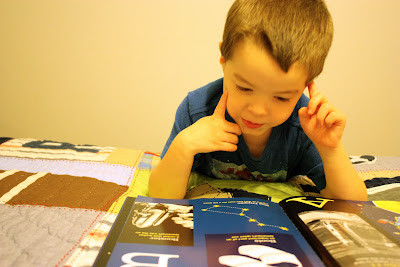