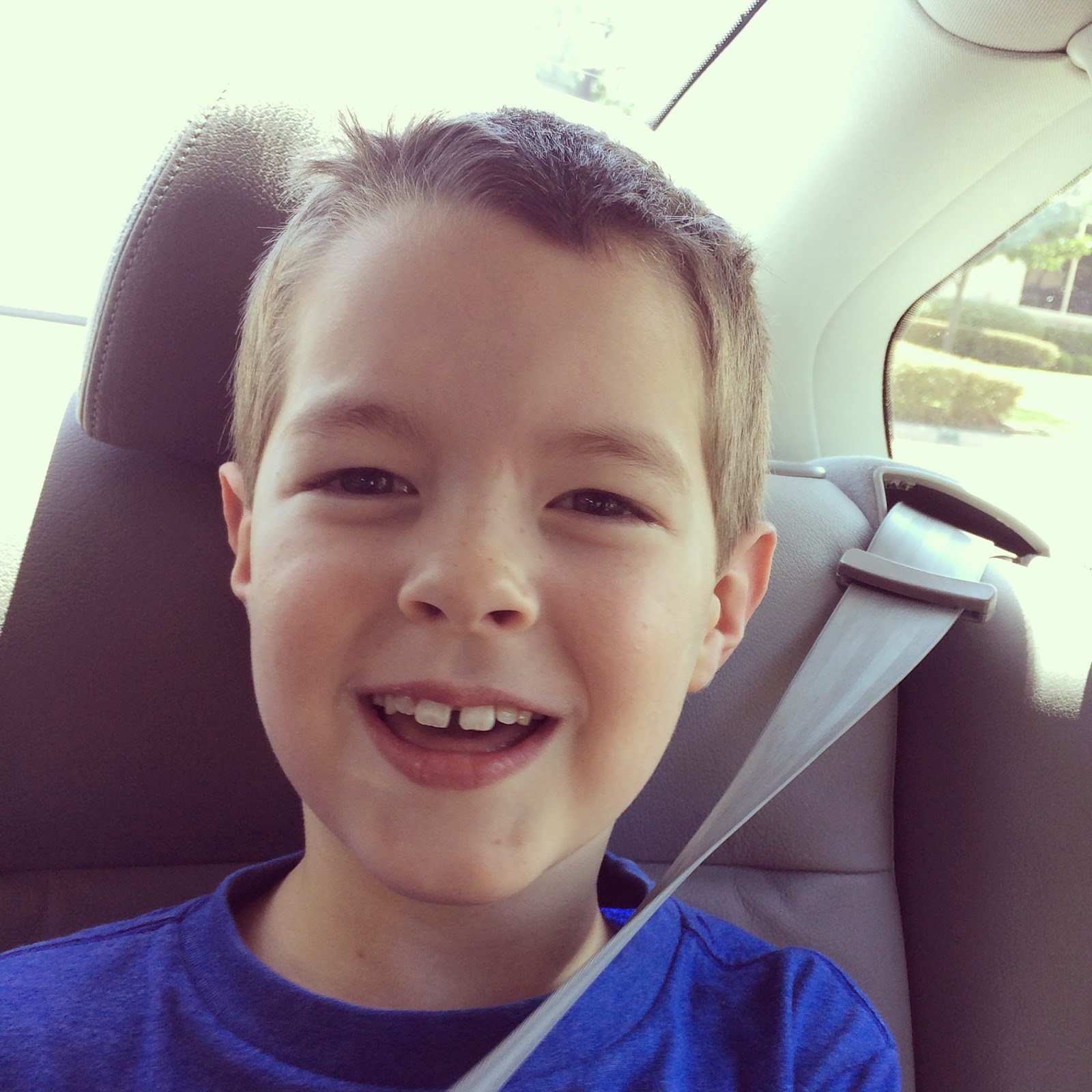 It's taken me over a month to write this blog post because I didn't really want to think about the day Will knocked out his permanent front tooth.  Do you know that feeling when accidents happen?  You replay the event a thousand times in your mind and wish for a different outcome.  That's the feeling we've had regarding Will's front tooth.  I've joked with people that I'm weak of character because I was a mess after this happened.  This unfortunate event had me awake for many nights worrying about Will.  Mark and I felt so sorry for him.  We wished we could make it better but there was nothing we could do but follow the dentist's instructions and pray for healing.

Here's how it all began.

My family from Virginia was visiting--my brother Chris, sister-in-law Laura and nieces Ella and Lily, and my brother Brian and niece Cassidy.  We were having a great afternoon (which I still need to blog about).  We'd grilled burgers, let the kids go swimming and enjoyed hanging out together.  The kids were playing outside in the swimming pool and on the swing set.  We also had out a giant beach ball sprinkler.  I let them wet down the slide with the water toys since they were already wet from swimming.  The kids were having fun going down the wet slide and playing in the sprinkler.

It was at the bottom of the wet slide where Will's tooth got knocked out.  He bent down at the bottom of the slide to wipe off some grass stuck to his leg.  At that very moment Ben slid down the slide on his stomach.  I don't think Ben and Will ever saw each other.  Ben's feet knocked Will's feet out from under him and Will was already bent over so that when Ben made contact Will's face hit the bottom of the slide.  Will never saw him coming so he couldn't brace himself.  His face/tooth took the brunt of the impact.  I saw it happen, but I didn't think it was that serious from where I was standing.  I thought he might have a bloody lip.  As soon as he turned around, I could tell it was much more serious.  He immediately yelled "I've knocked out my permanent tooth!" and blood was everywhere.

I was on the back porch and turned to yell inside the house for Mark. This is my typical response when there's trouble.  I yell for Mark to come and help. We knew we  needed to comfort Will, but we also needed to talk to his pediatric dentist fast.  We got Will inside.  We got Dr. Kelli on the phone.  Laura had the composure and quick thinking to get the tooth from outside where it was knocked out and left on top of the grass.  Those first 5 minutes were a whirlwind.  Dr. Kelli answered immediately and told me the tooth needed to be reinserted in the tooth socket.  Since Laura is a nurse, Mark and I both looked at her.  I can't express how thankful I am that she was there.  If a bad thing was going to happen, we had the best possible scenario for handling it.  Laura reinserted the tooth.   We didn't rinse off the tooth.  It's important not to do that.

We left the house in a mad dash to get to the dentist office where they were going to put on a splint, which looked just like braces.  That would hold Will's tooth in place so it could hopefully reattach.  Will was such a good patient during the entire thing.  Obviously he was upset, but he was as brave as we could have hoped for.

Here's Will in Target waiting for his antibiotics prescription to be filled.  This is just after the splint had been put on. 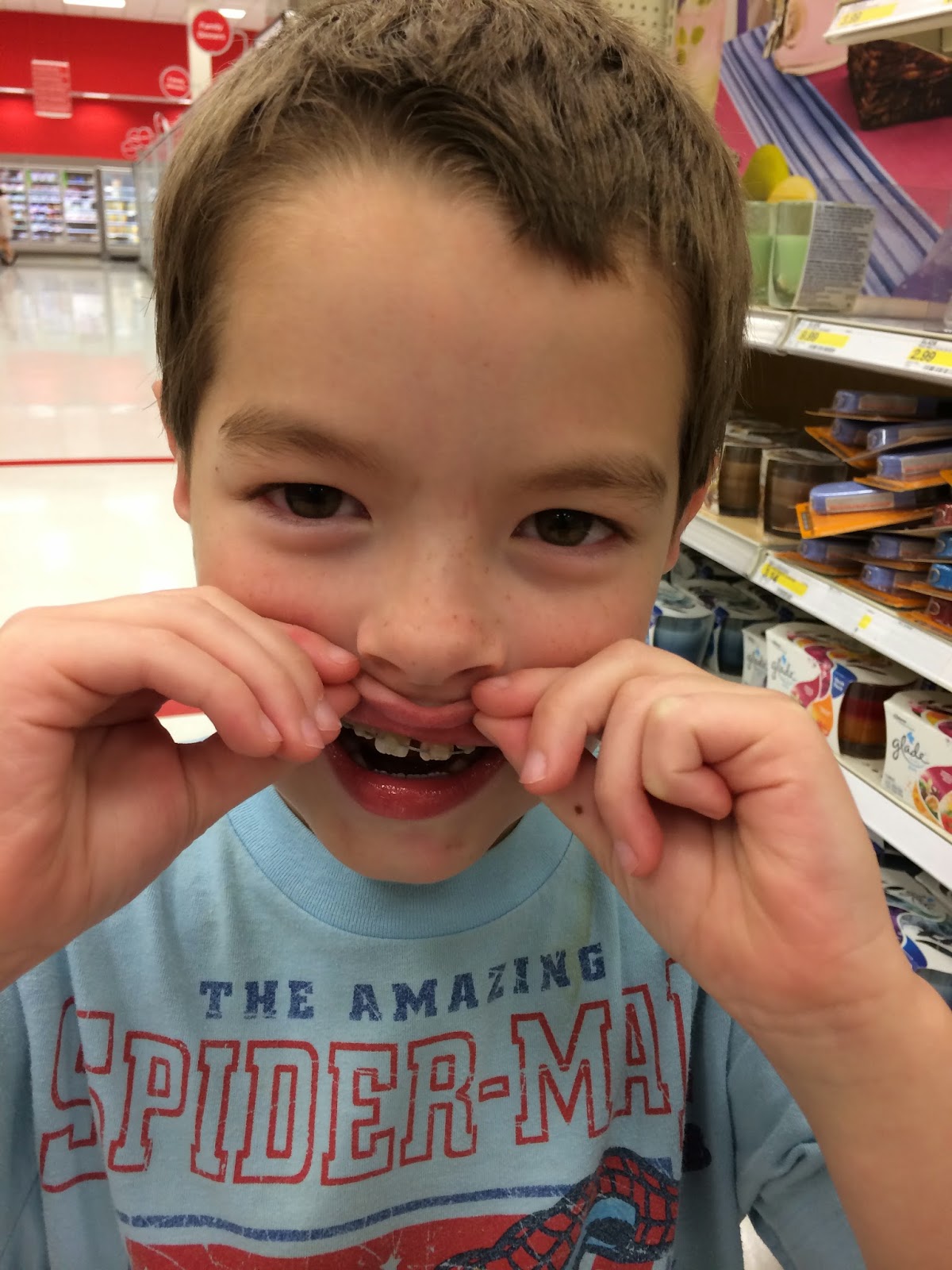 Here he is a few days later.  I was so thankful he never complained of pain. 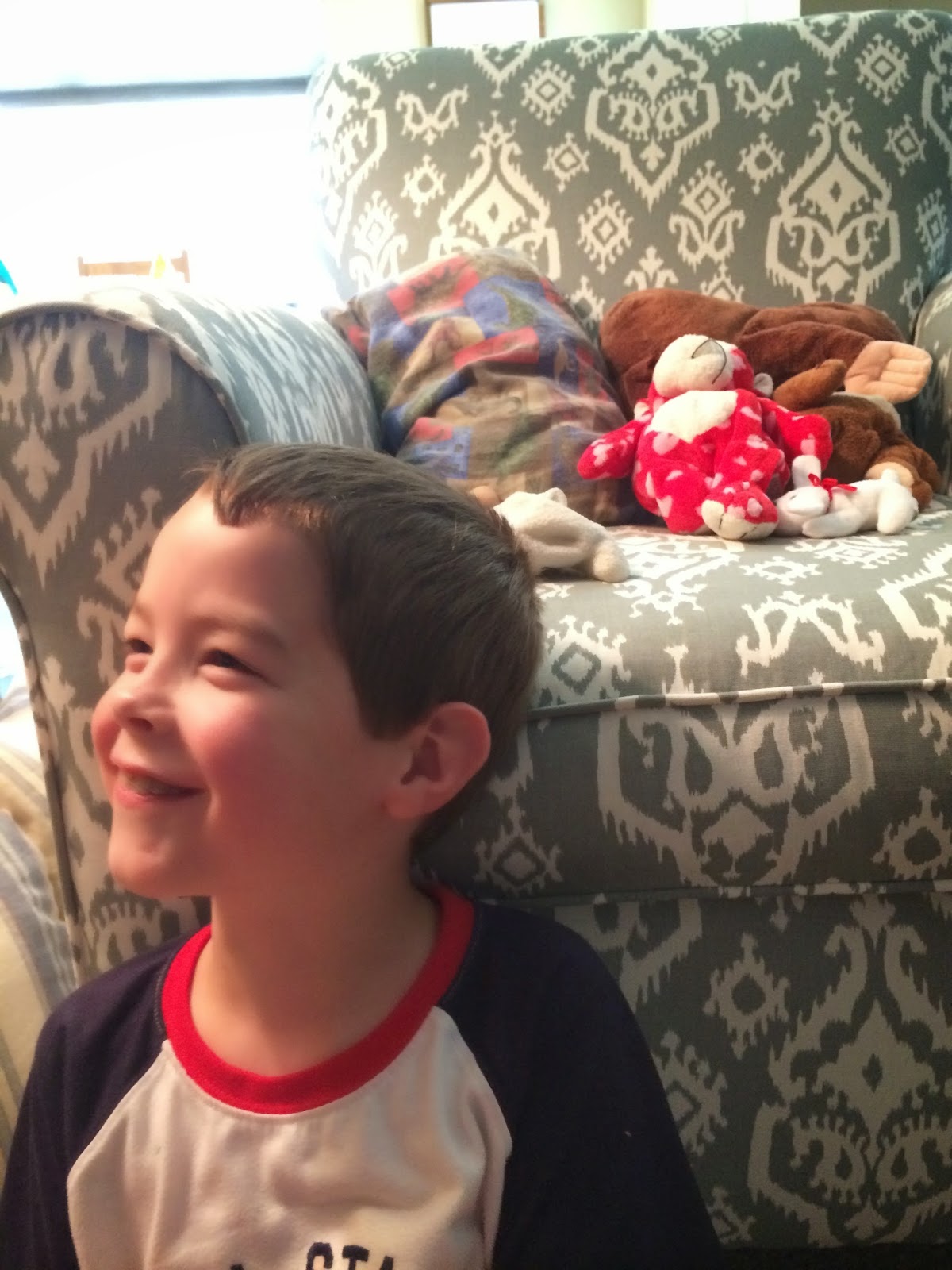 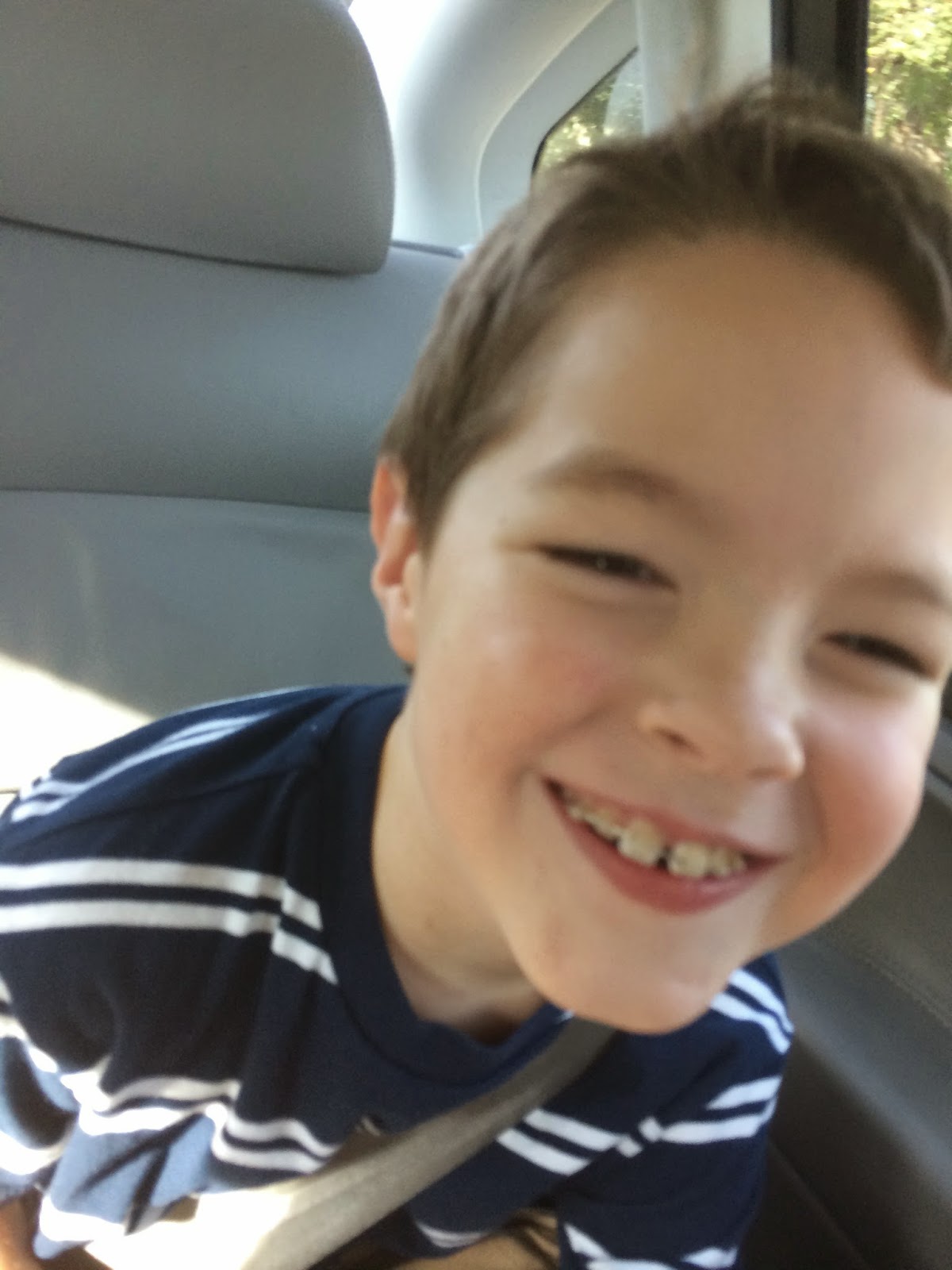 Here he is a few weeks ago after the splint was removed. 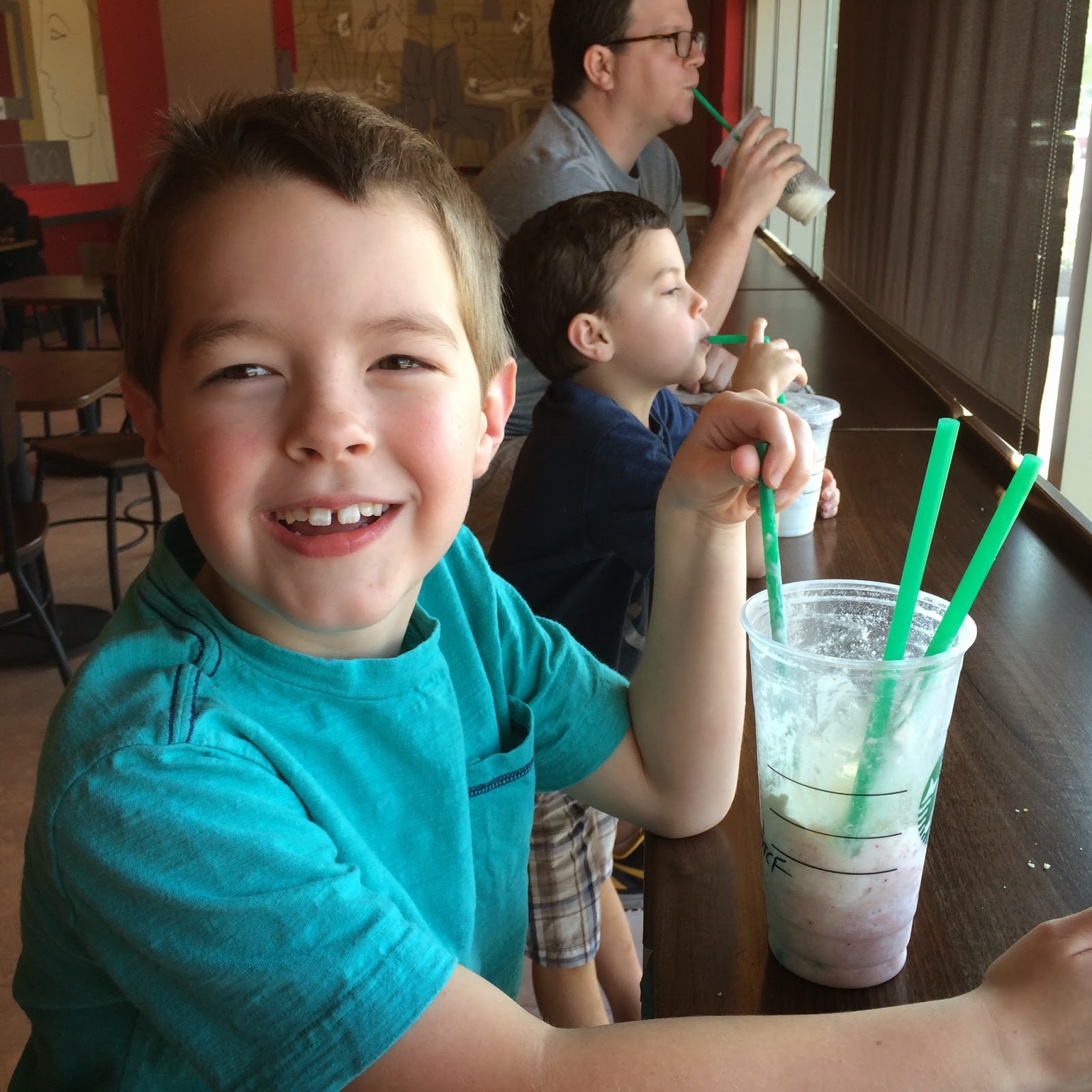 So here's the status of his tooth almost 6 weeks since the accident.

The X-rays at the endodontist didn't show any problems so that's a good thing.  I was disappointed when the tooth didn't respond to the sensitivity test.  At the 2 week checkup he did respond to a "cold test" for sensitivity.  The advice from the dentist was to wait and see.  We will go back in 6 weeks for another checkup.  I'll take no bad news as good news at this point.  We are cautiously optimistic and praying for healing.  We hope that the tooth will reattach properly and heal.  Please keep Will in your prayers.