He Knew: It's a God Thing 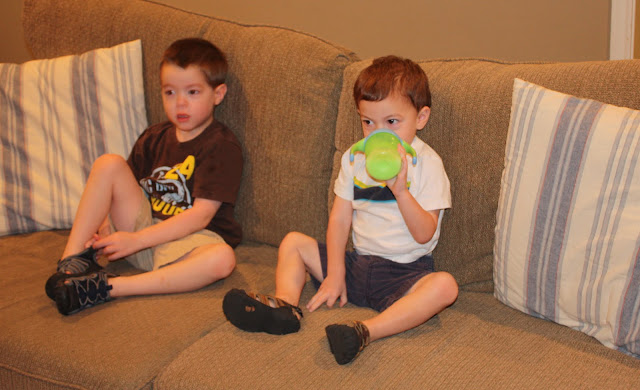 Will and Ben ready for school.  It's early so they still look sleepy.

My life feels like it's not my own right now.  Sometimes I find myself almost out of body as I go through the motions of getting through each day.  It's been really stressful dealing with my grandpa who is sick and nearing the end of his life.  On top of that this week my mother-in-law passed out and fell and hit her head.  I talked about my grandpa here and I explained what happened with my mother-in-law here.  Let me explain just a little more about that situation.

My mother-in-law has always gotten lightheaded and passes out when she gets sick with a virus.  Her sister does it as well. ﻿This is not unusual for her and she usually recovers like anyone else.  The big difference this time was that she hit her head when she fell. She hit is so hard that it busted open and required stitches.  On Tuesday, my father-in-law called about 6a.m. to tell us that Carol was sick.  He sounded really flustered and then he went on to explain that there was blood in the bathroom.  At that point, he wasn't sure if she had thrown up blood or if it was from hitting her head.  I can understand why he was out of sorts.  I went over there to help him decide what to do.  We didn't call 911, but we knew she needed to go to the doctor or hospital.  Mark went over and helped his dad get his mom to the car, and he drove them to the hospital about 40 minutes away.  Once there, they did a cat scan and found a skull fracture and bleeding on her brain.  Because of the brain bleed and head trauma she needed to be at a hospital with a neurosurgeon in case it required surgery.  She was transported by ambulance to a larger hospital in Plano (a suburb of Dallas).  Thank goodness the brain bleed was small and did not require surgery.  She was still fuzzy about what had happened and didn't remember anything from the night before she fell until the end of the next day.  The doctor's were running lots of tests to determine the cause of dizziness, which wasn't a virus.  She stayed in the hospital until Thursday afternoon.  The doctors determined that she did not need to be on the high blood pressure medication she was taking.  They think that caused the dizziness.  She is home now resting and recovering.  It will take time but she should make a full recovery.

Most of you know that my MIL keeps Will and Ben while Mark and I are at work.  I stayed home with the boys on Tuesday while Mark helped his parents.  Mark stayed home with them on Wednesday while I went to work.  When I went to work on Wednesday I was totally overwhelmed.  People were asking me all sorts of questions.  It was out of concern, but I couldn't even think.  I was still upset about my grandpa, I was concerned about Carol, and I didn't know what we were going to do with the boys.  Mark and I have to go to work.  And, I'd planned to use most of my personal days/sick days this year when the time comes when I have to deal with my grandpa's funeral.  I had a breakdown in the teachers' workroom Wednesday morning.  I can't tell you how many times I cried on Wednesday.  I know everyone at work felt sorry for me.  So many people offered help and support so that was nice.  The biggest help was when a teacher offered to call the school's child care center to see if there were any openings for Will and Ben.

There were two spots left -- one for Will's age and one for Ben's age.

I think I cried from happiness when she told me.

My boys have never been to daycare.  In fact, I'm not sure if they've ever even stayed with anyone who's not family.  The thought of daycare made me want to quit my job.  Now, don't get me wrong.  I have nothing against daycare, I don't.  I just didn't have time in my situation to research options and select one that I thought was best for our family.  The only option at that point that didn't make me want to quit my job was the school's child care center (it's run by our school and it's just across the street from where Mark and I teach).  It's like He knew I couldn't handle anymore at this point.

As my friend, Terri, said, "Though all of this has taken you by surprise, it has not taken God by surprise.  Two spots open for Will and Ben!  Just evidence of God already knowing you would need them."

So, we found out on Wednesday that they could start on Thursday.  I ran around like a crazy woman getting shot records, having papers notarized and filling out information forms.  What most people have several weeks to prepare for we did in about 12 hours.  We went to Wal-Mart Wednesday night and got stuff for their breakfast and lunches.  We also bought them nap mats and the cutest, little backpacks.  We tried to make it a big deal and fun so that would be positive about going.  Thursday we dropped them off and there were no tears!  Can you believe it!?!  They had a great first day.  The second day was a little rough for Will, but this is a big adjustment.  Ben's been a little cranky and I think it's adjusting to the new routine.  I'm thankful we have a long weekend and the boys can rest and recoup.

We'll take it one day at a time and keep hoping for the best.

Even though I was surprised, God wasn't.

My facebook status Tuesday was, Sometimes God calms the storm...sometimes He lets the storm rage and calms His child.  I made it through the week and have peace that can only come from the Lord.

Thanks, Katie for giving us a place to share the God things in our life!
Posted by Michele at 10:22 PM