On the agenda-- Sarah Jarosz concert and Pecan Lodge BBQ. 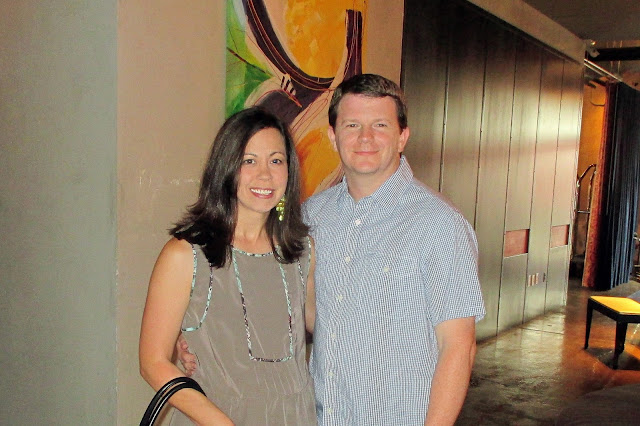 We stayed at the NYLO Dallas South Side which is located just across the street from South Side on Lamar.  It was definitely urban and hip for a couple of country bumpkins. ;) 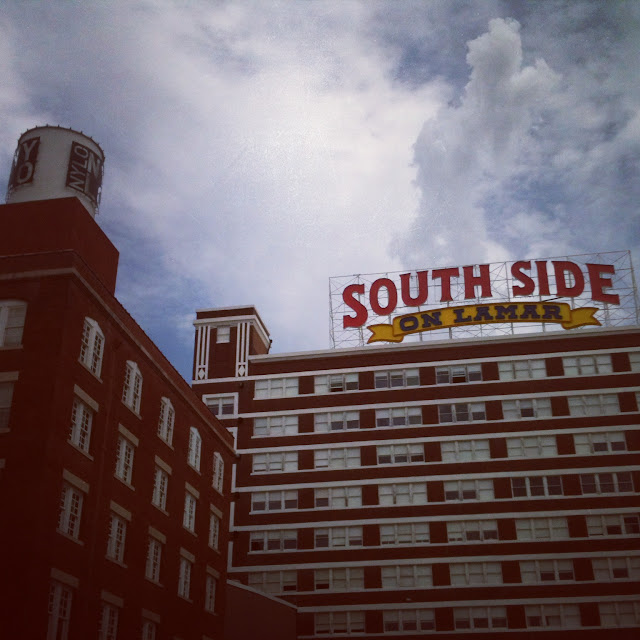 A few pics inside the hotel and the view from the rooftop. 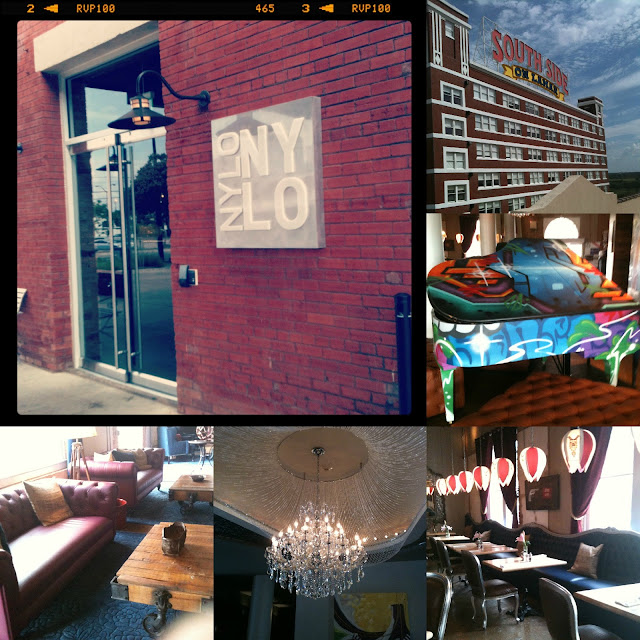 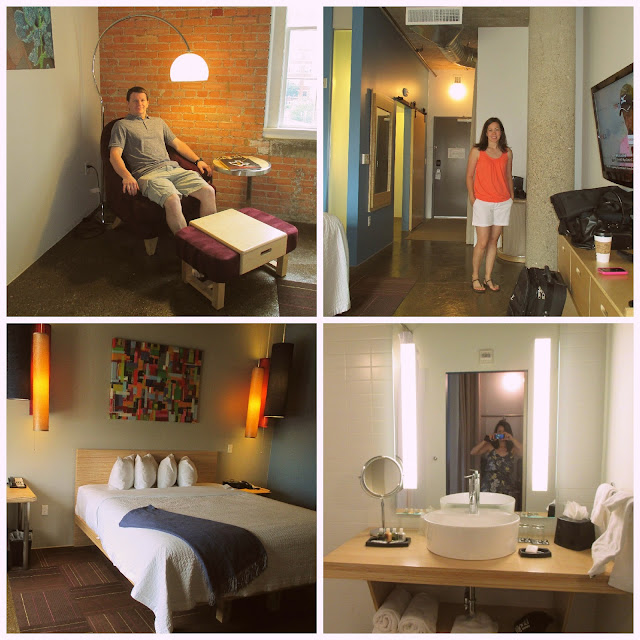 Friday afternoon we walked around the area.  Our first stop was at Bill's.  We've only been to Bill's Records once before, but it was at a different location so this was my first time to see the store on Lamar.  My friend Kayreen in Seattle immediately came to mind when we went to Bill's.  Also my friends Lacy and Sara are huge vinyl collectors and appreciate places like Bill's.  We chatted with Bill for a bit.  The guy truly loves music.  We didn't have much time to kill before the concert and we didn't want to drive anywhere so we ate at Full Circle Tavern, which was right next door to Bill's.  The burgers were excellent. 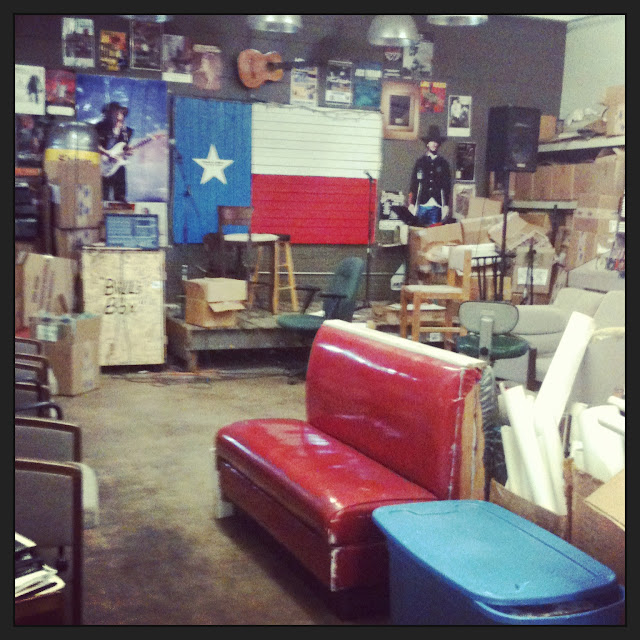 The real reason we were even staying at the NYLO South Side was because one of our favorite musicians--Sarah Jarosz-- was playing a concert at Poor David's Pub just down the street.  Sarah is an extremely talented bluegrass singer-songwriter.  She has a beautiful voice and plays the mandolin, banjo and guitar.  She's obviously talented, but the lyrics to her songs are one of the things we appreciate most about her music.  Sarah played an amazing set.  She's young, only 21 or 22, but extremely gracious in concert.  She even posed for a photo with us after the show! 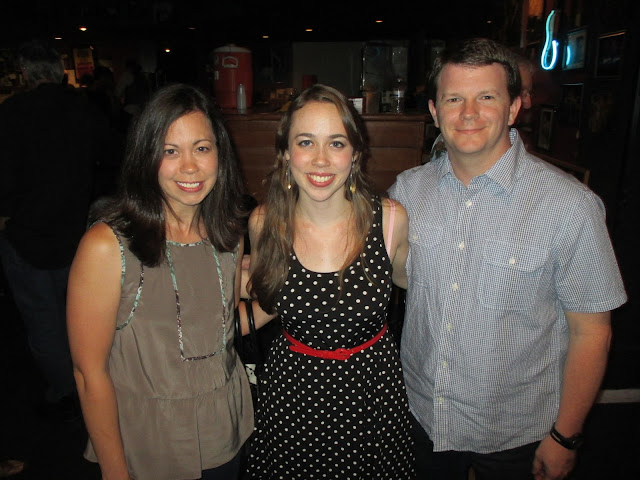 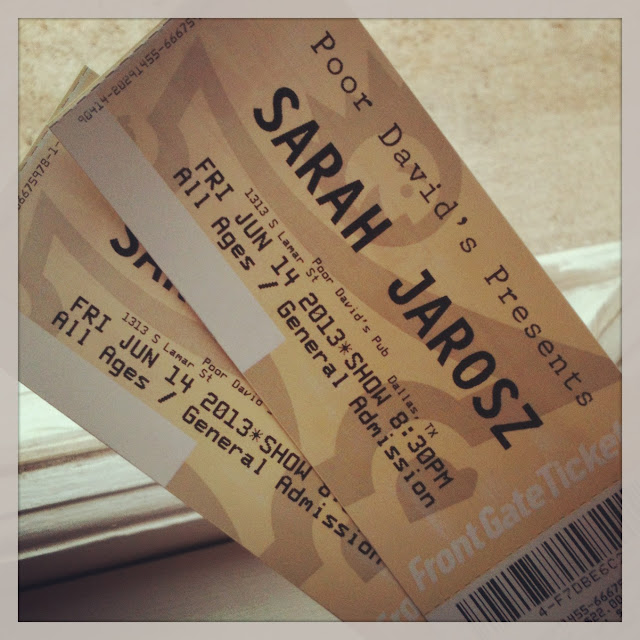 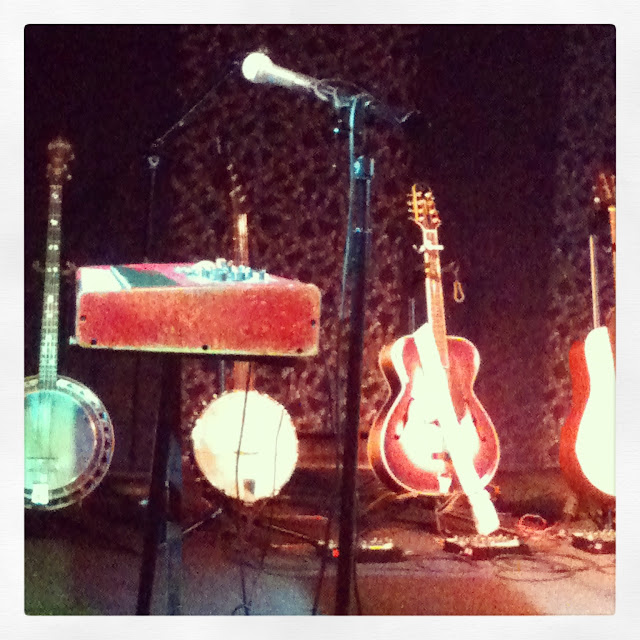 We had amazing seats!  We were on the second row!  I know this photo is really blurry but I took it just to show how close we were. 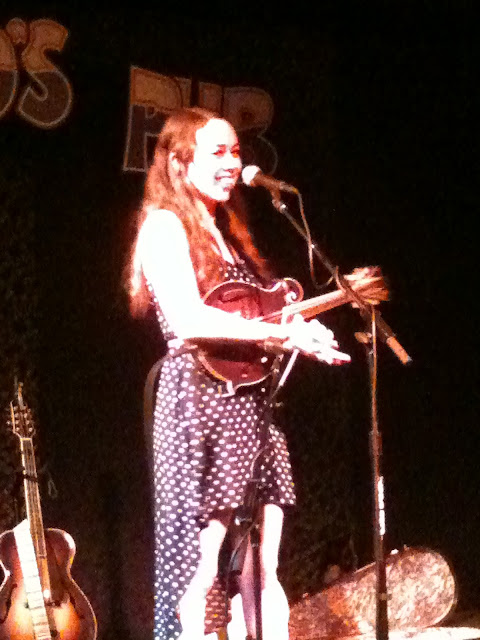 The next morning we walked across the street to Opening Bell Coffee.  This coffee shop had the feel of coffee shops I remember when I lived in Seattle.  It was the best chai tea we've ever had. 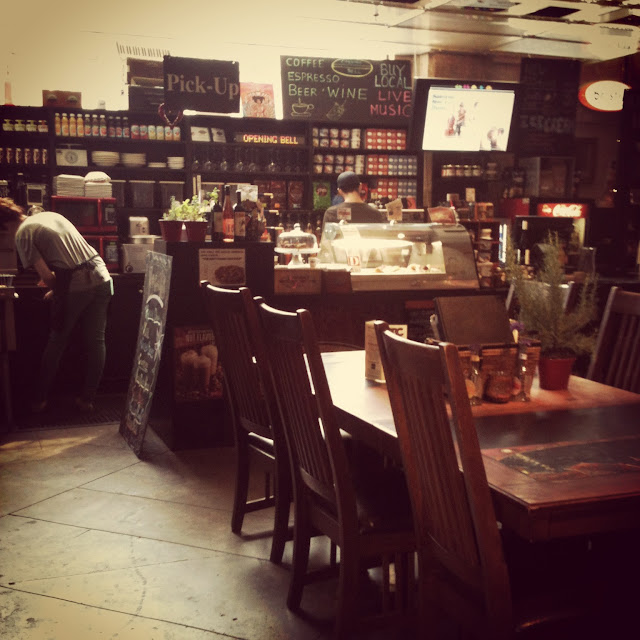 Mark's been wanting to eat at Pecan Lodge a BBQ place located in the Dallas Farmers Market.  It was near  the area we were staying so that was where we had lunch.  It was a 2 hour wait in line.  Pecan Lodge serves until the food runs out.  They were already out of sausage when we got to the front of the line (we were disappointed), and Mark was the last person to get ribs.  I got brisket and pulled pork with a side of beans.  Mark got pork ribs and brisket with a side of mac 'n cheese.  They threw in a free cookie because the serving of pork ribs was a little small.  I have to admit that it was worth the wait in line.  Everything was delicious. 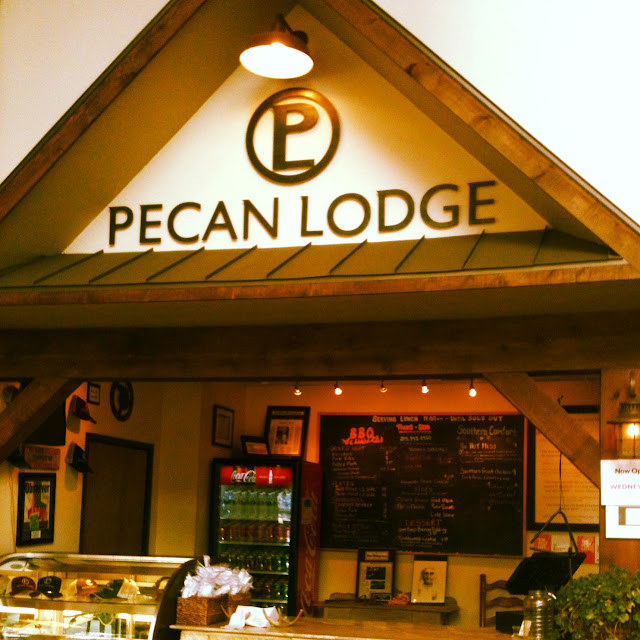 We couldn't finish all the food so we took home leftovers.  It was just as good reheated. 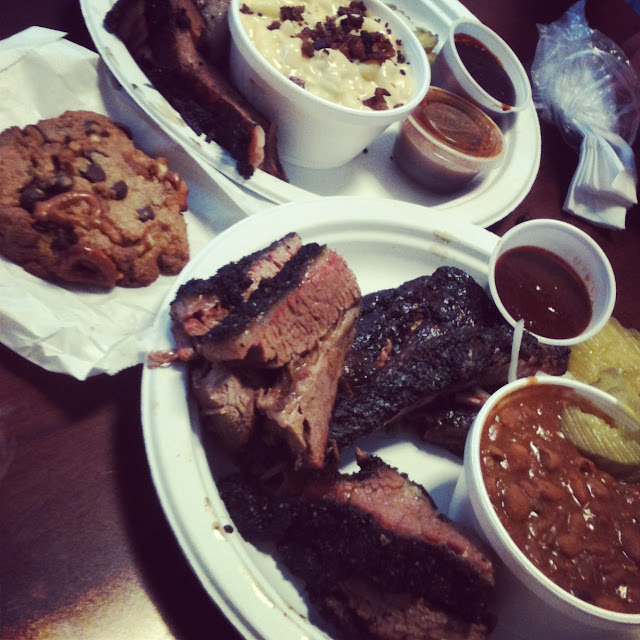 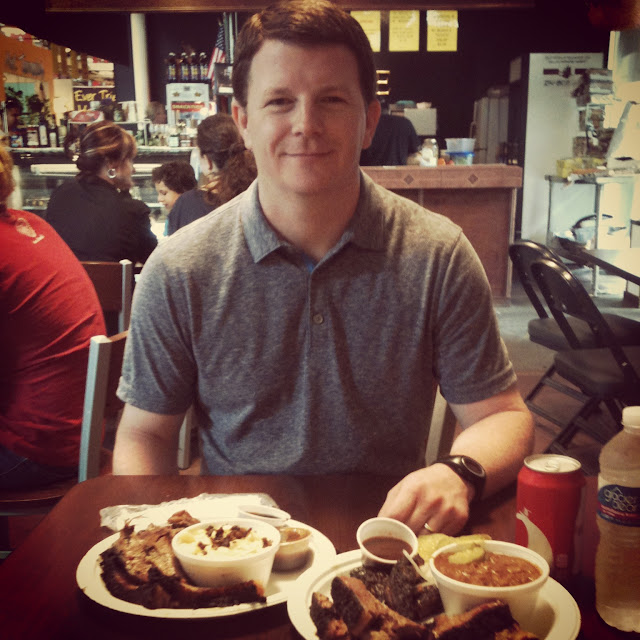 The most RANDOM thing happened while we were waiting in line.  I ran into an old friend and college roommate Connie.  It's been years since we've seen each other.  What are the chances that we'd be in the same line for BBQ!?!  It was really good to see her and catch up. 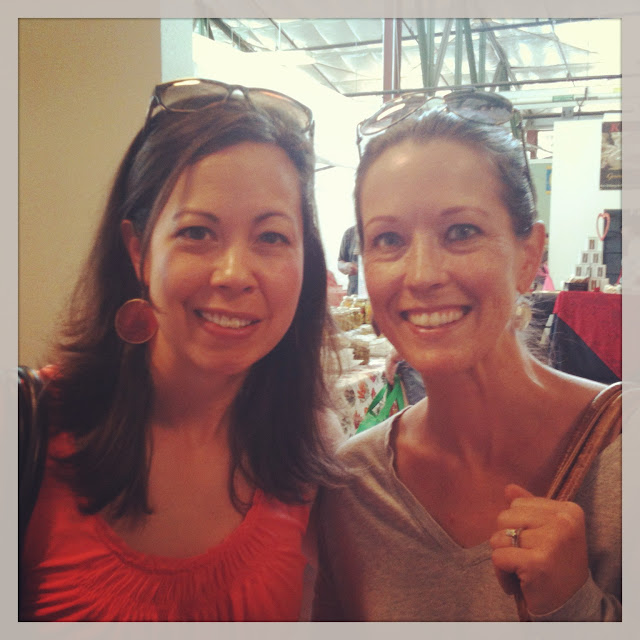 My eyes were bigger than my stomach.  I wanted to buy one of everything at the Farmers Market.  Mark had to stop me, ha! 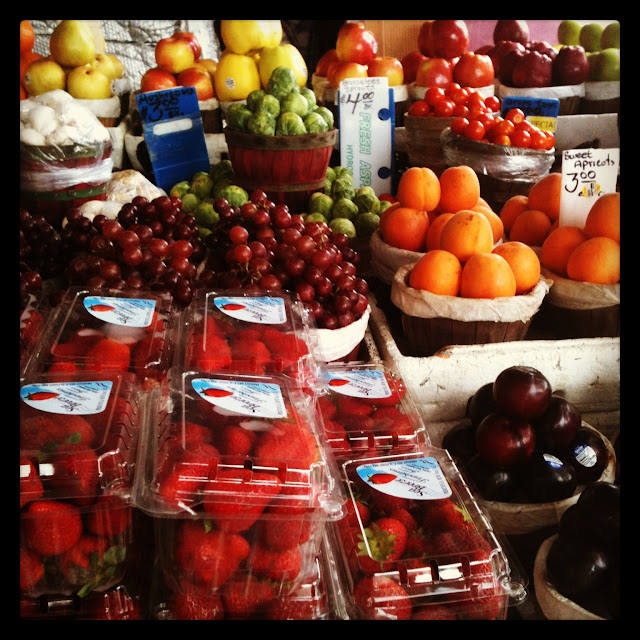 We always love spending time together, but it's always good to get home to these guys. 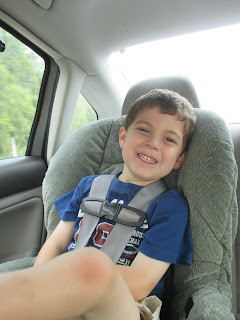 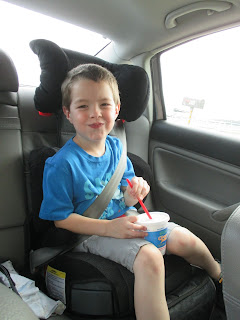