Really this post is for me and only me. Most kids say the funniest things and my kids are no exception. I'm writing this so I don't forget the sweet and funny moments that are here today and gone tomorrow. 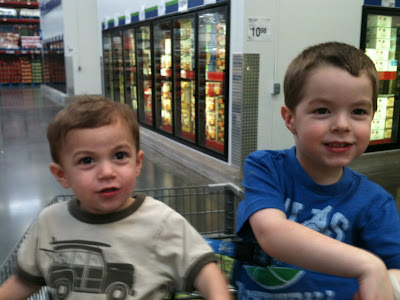 Will likes the big shopping cart at Sam's Club. He says that they are made for twins because there are two seats. Ben and Will doing some shopping at Sam's Club in the "twins shopping cart".
We were listening to the radio in the car and Rick Springfield's "Jessie's Girl" came on. Will said, "Is that Woody's girl?" Woody and Jessie as in Woody and Jessie of Toy Story!!!
Ben's so into cars and trucks right now. He's learned many of the different car makers and their logos. He knows Ford, Chevy, Dodge, Nissan which sounds like She-shan, Honda which sounds a lot like hONda, Toyota is ToTa, Volkswagen is Wagen, Mazda, Kia, GMC and Buick which sounds like "Boo-ick".


Ben can't pronounce spaghetti. He says "Gep-E". Will couldn't say it for the longest either. He would say "Sa-geph-hi".
Sometimes Ben calls Will, "Bubba." We're not really a bubba kind of family, but I think it's endearing and sweet.
Will loses privileges when he's in trouble. One of his favorite things to do is listen to songs on iTunes. If he's lost that privilege he'll say, "Can Ben listen to a song on iTunes? I think Ben would like to listen to a song." Nice try, Will.  He's a little too smart for his own good.
We say family prayers at night just before bedtime. We usually say them in the living room, Will's room or Ben's room. The boys have started a new thing where they get tickled and start laughing during the prayers. We're really trying to teach them to be respectful during this time, but it's pretty cute and funny.
Recently Ben's prayer went something like this, "Pray, God, Papaw, Horse, Papaw." Another prayer was, "Papaw, Maggie, Papaw." It's just the sweetest thing with his little hands folded by his face and his eyes closed.
Will prays a speed prayer, "Dear God, thank you for Mommy, Daddy, Will and Ben. Thank you for going to Mamaw's house. In Christ name we pray, Amen." Imagine all of that being said in about 5 seconds.
Back in May, Mark had to stay home with the boys when his parents weren't able to keep them so that night Will was praying his usual prayer, "Dear God, thank you for Mommy, Daddy, Will and Ben. Thank you for going to..." He wasn't sure what to say since he didn't go to Mamaw's house that day. We couldn't help but crack up.
Ben loves going to the donut shop. Will loved going to the donut shop at Ben's age and he still loves it today. Ben pronounces donut shop like "show-nut shop".

A few weeks ago, I lifted Will up to the sink to wash his hands and he said, "There's no dishes.  That's weird."  I guess I have better housekeeping skills in the summer than during the school year.  I actually have time to wash all of the dishes and put them away.  An unusual site to my 4-year-old.

Recently my 95-year-old grandpa has voluntarily given up the keys to his car.  I'm so proud of him for making the decision to stop driving.  It was much easier on all of us because we didn't have to make him stop. He decided it was time to stop driving because his vision wasn't as good as it used to be.  I was explaining all of this to Will.  He didn't quite understand it all.  I told Will that he has young eyes that can see and Papa Ralph has old eyes that don't see very good anymore.  At our visit with my grandpa yesterday, he kept asking Papa Ralph "Do you have old eyes?", which my grandpa totally didn't understand.
Posted by Michele at 9:00 AM