It's Monday and here's some randomness for the sake of being random.

{Image}
{Image}
I'm still recovering from setting my alarm clock and waking up at 2:56A.M. to see the regal ceremony live.  I watched it in a sleepy daze on the couch in my living room.  My husband had no idea I was awake until I woke him up at 6:30A.M.  He couldn't believe I woke up to watch it all.  I had so much fun talking about it at work with the other teachers who watched it too.  I know some people in the blogosphere have said negative things about the wedding, but I have nothing but praise.  I thought it was magnificent. (Spoken from a person who had a $3,000 wedding budget, no joke!)  The ceremony was beautiful.  Kate was stunning and Prince William was dashing.  The Royal Wedding was everything I thought it would be and more.

{Image}
Surprisingly one of the things that struck me most while watching the wedding was the interaction between Prince William and Prince Harry.  I suppose since I'm a mother of two sons who are very close in age like they are, I couldn't help but feel moved when I saw them together.  I read that Prince Harry chose the sapphire engagement ring of his mother's, but gave it to Prince William because he thought it should belong to the future queen of England.  If that's true, so touching.  It appears that they have a very close relationship.  I hope that my boys will be that close as they grow up.  I can just imagine Ben being Will's best man at his wedding.  Makes me teary-eyed just thinking about it.

#2
Did you know I usually buy my own gifts?  I do.  I don't like surprises.  Mark doesn't care if I buy my own gifts.  If I pick it out, he knows I'll like it.  It works for us.  We don't really do big gifts for Christmas or birthdays, and we get little things for other special occasions.  For Mother's Day I purchased some lovely prints from Emily at Jones Design Company.  The Home print will go in the living room/entry.  The Rise and Shine print is going in the boys' bathroom once I to go to IKEA to get a frame.  I'll share photos when they are in place. 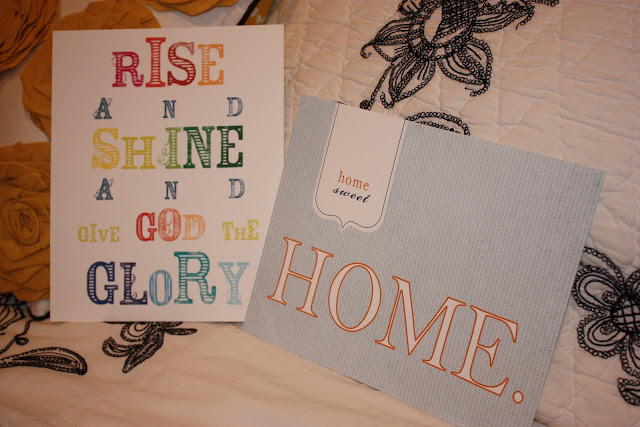 I should confess that I also bought a few items of clothing for Mother's Day too.  I love retail therapy, maybe more than I should.  Everything I bought was on sale.  Why am I talking about clothes on Monday?  I'll save that for What I Wore Wednesday.

My husband and I teach the 4th-6th grade Sunday school class at our church.  I'll leave you with one word and verse that have been on my mind since our study on Sunday morning.

Hebrews 11:1
Now faith is the assurance (substance) of things hoped for, the conviction of things not seen.