Growing up I lived with my grandparents. It’s a long complicated story that I may share at some later time, but let’s focus on traveling and fun things today. For as long as I can remember I’ve loved to travel. It must be all the summers spent on the road with my family as a child. Since my grandparents were retired, they had the luxury of taking long road trips every summer. They planned many of our vacations where we would spend a great deal of time in national parks. I have a deep love for our country’s national parks because of this. I was teary-eyed watching Ken Burn’s documentary about America’s national parks. It brought back so many fond memories.

I’m lucky to have married a man who loves traveling just as much as I do. We are both teachers and have the summers off (huge perk of the job). This is pretty convenient for two people who love to travel. As soon as Christmas break is over we start planning our summer adventure. This summer the agenda called for a visit to a dear college friend, three major league baseball games (happy father’s day to my husband), five states and 2000 miles with two little ones in tow.

Part one of our 2010 road trip began in St. Louis, MO. We visited the Gateway Arch, which is a part of the Jefferson National Expansion Memorial. While in St. Louis, we also attended a St. Louis Cardinals baseball game at Busch Stadium.

Because you can't have a road trip without the hokey photo in front of the state sign. 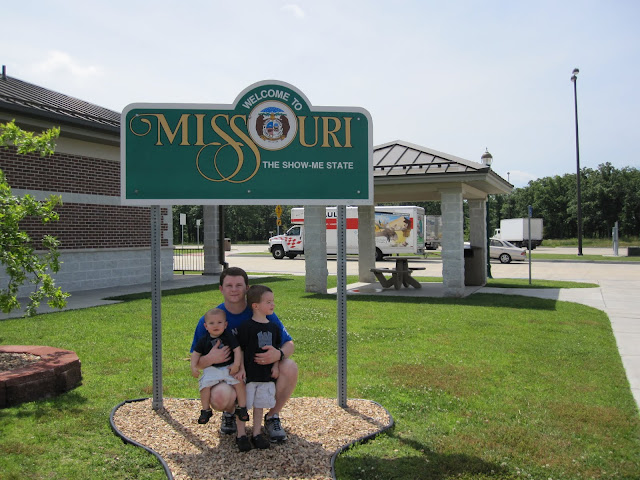 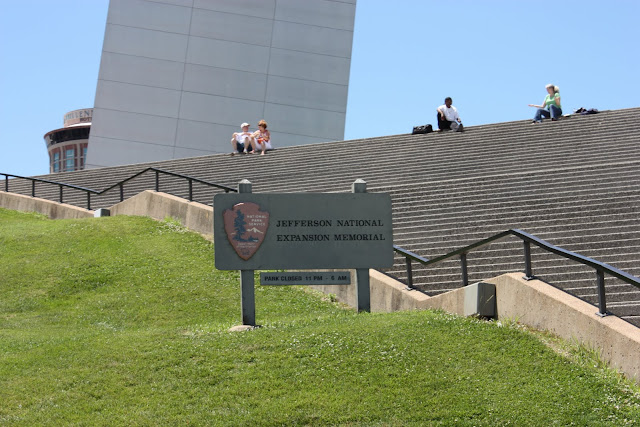 Getting ready to walk to the Gateway Arch 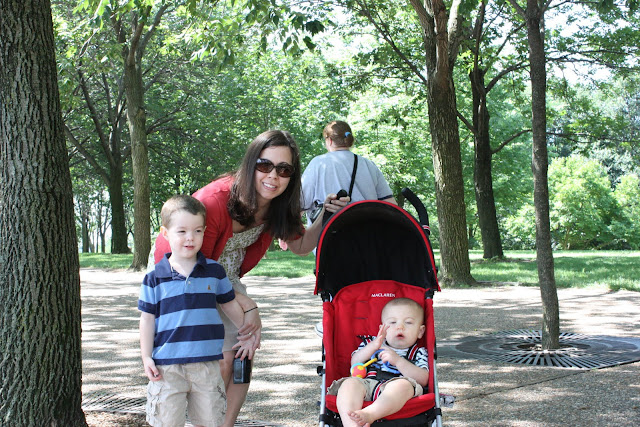 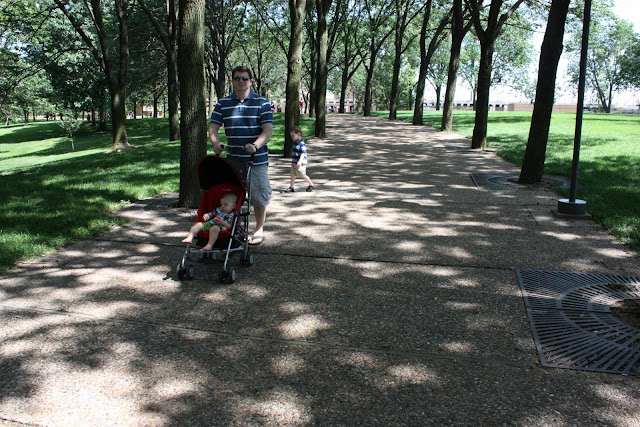 Our family with the Gateway Arch in the background and some really tall guy to the right. 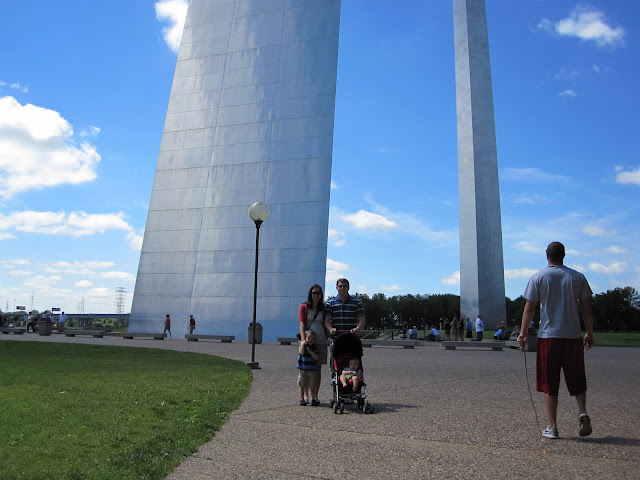 The Arch is magnificent. 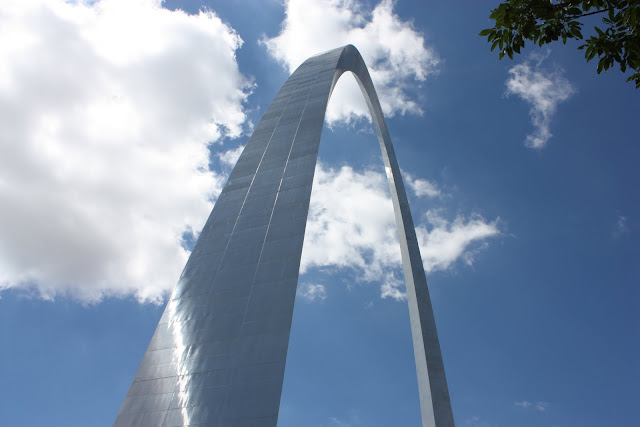 Mark and Will checking out the display tram car. Ben looks kind of bored sitting in his stroller. 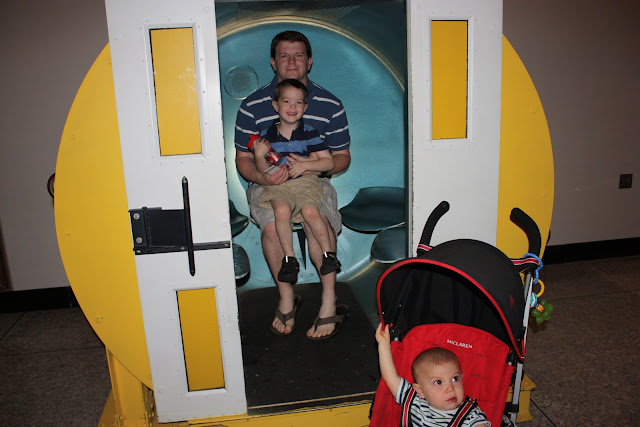 Will posing by the National park sign. (We LOVE National Parks!) 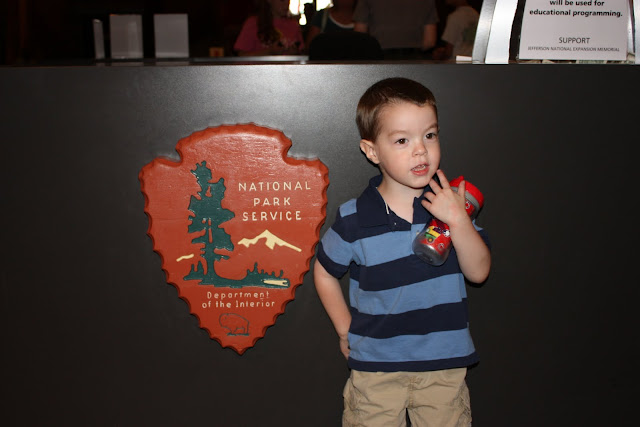 I'm a history teacher and a complete and total history nerd! I thought these National Parks Passport travelogues would be great for the boys. We bought the passports online here and also purchased the companion book that goes with it. 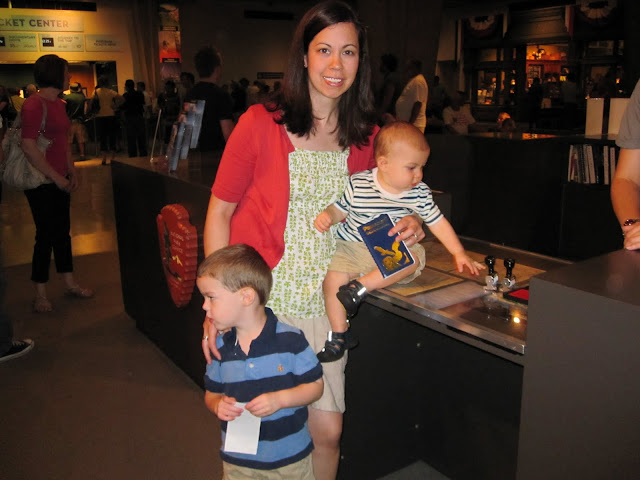 Getting the passport stamped with the help of the nice park ranger. 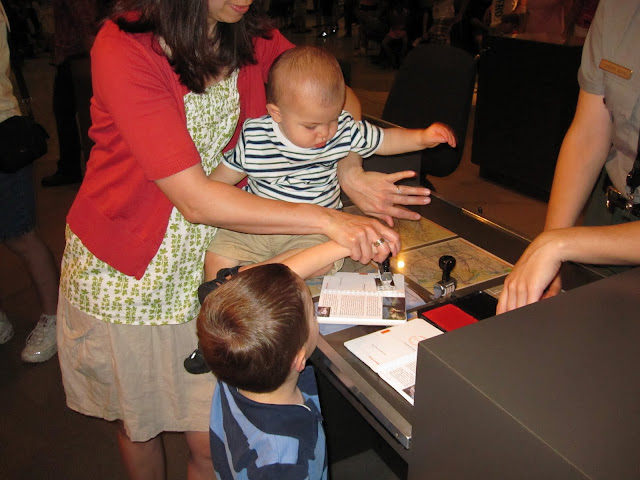 Ben waiting before we boarded the tram. 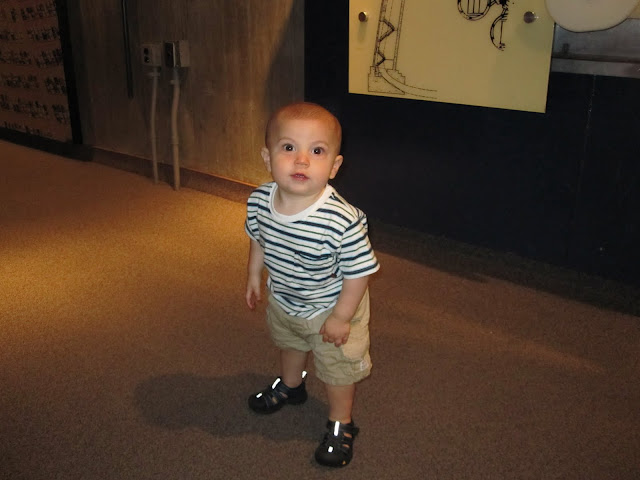 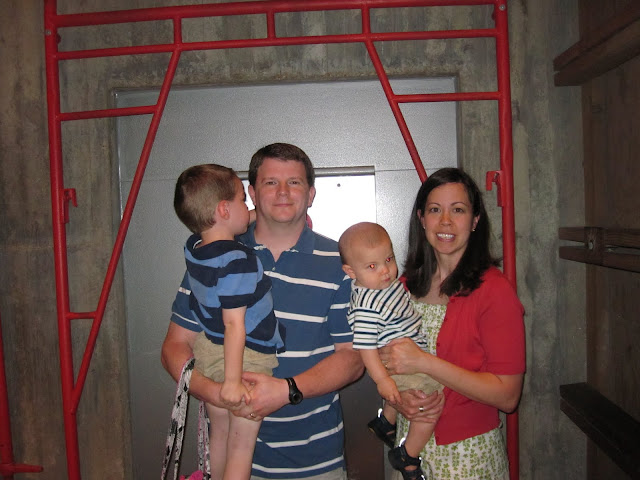 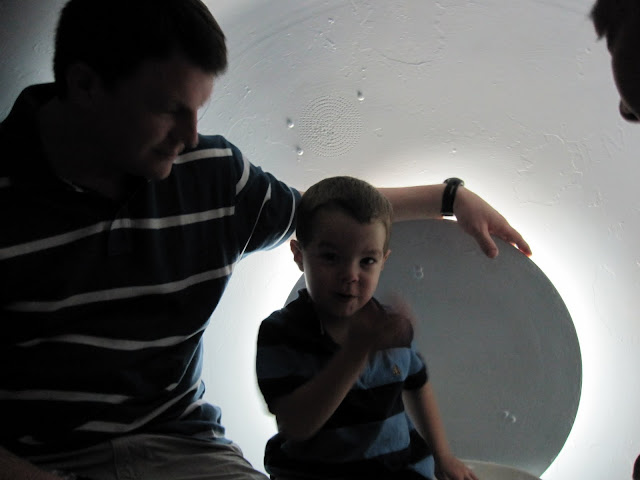 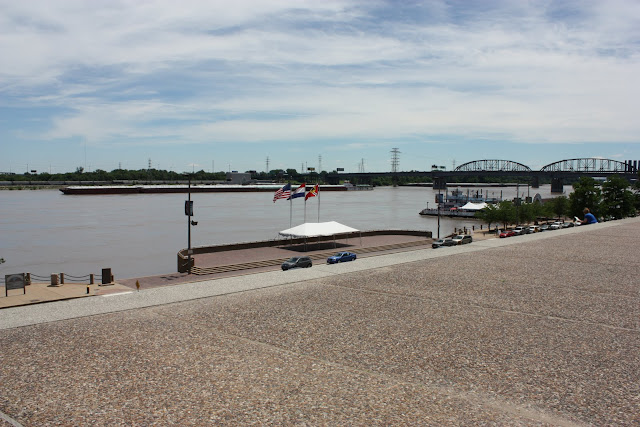 This photo says it all. Will is making his typical face for photos, Ben's belly is hanging out of his shirt, and who knows what I'm thinking here. It's time to call it a day! 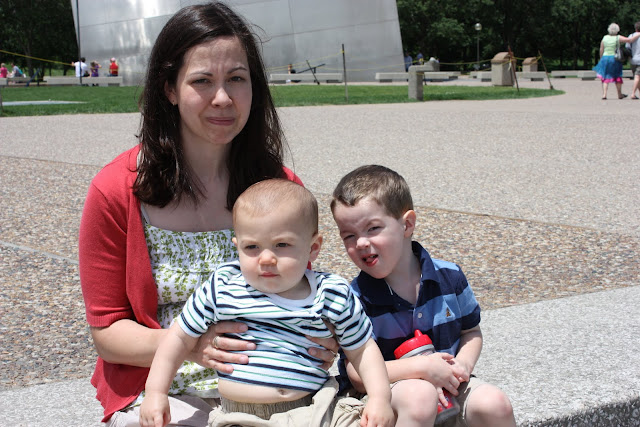 The guys with the Arch in the background. 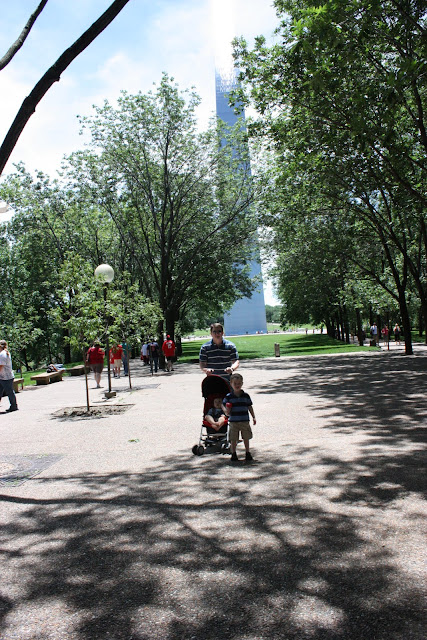 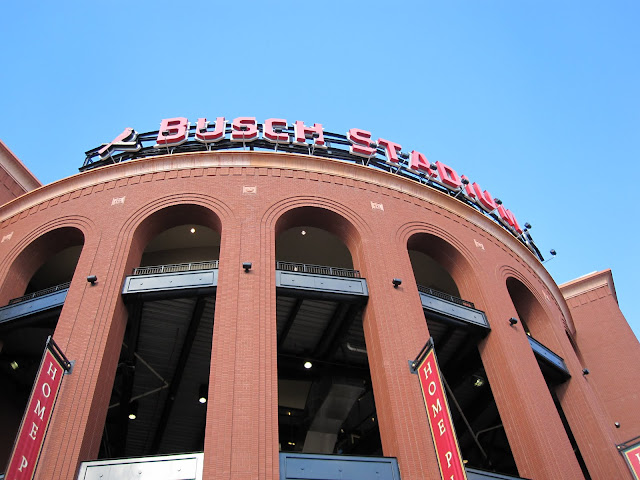 Probably one of my favorite photos of Mark and Will. So handsome! 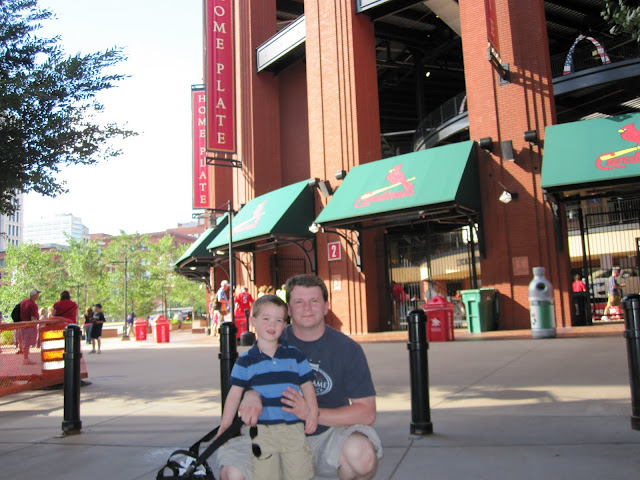 Ben was asleep when we went into the stadium and after he woke up we changed the boys into their matching baseball shirts. Cute! 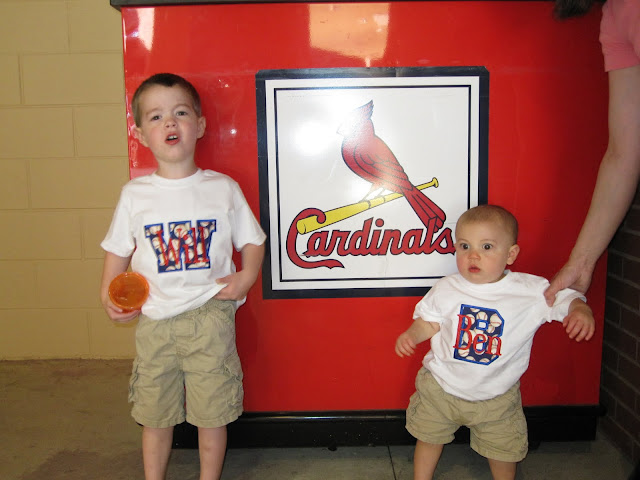 Still in the process of getting Ben dressed.  I'm putting his shoes on. 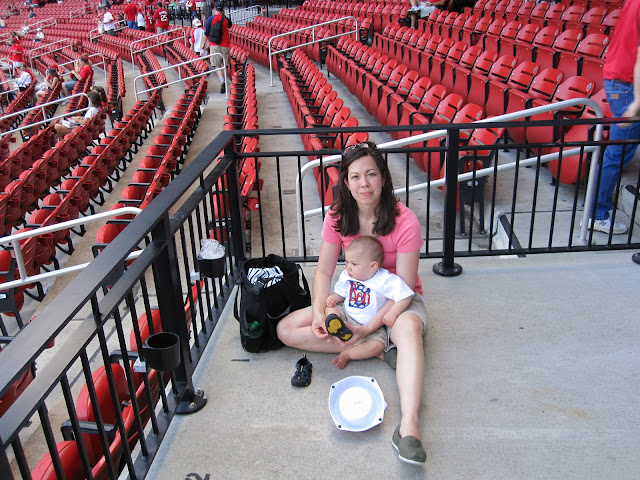 This is one of my favorite family photos of the entire road trip. 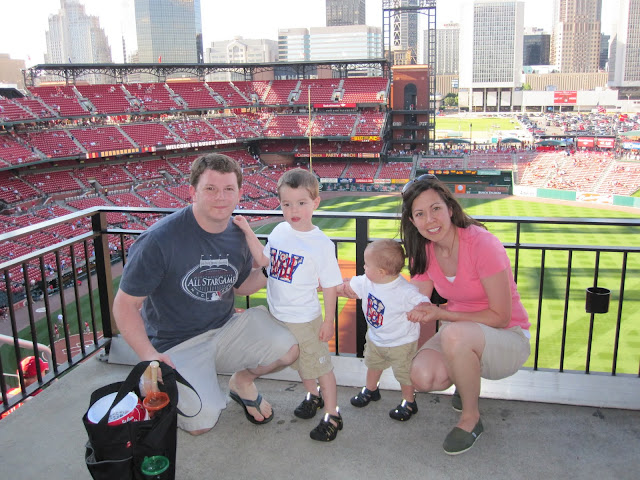 I like this one of Mark and the boys and the Arch in the background. 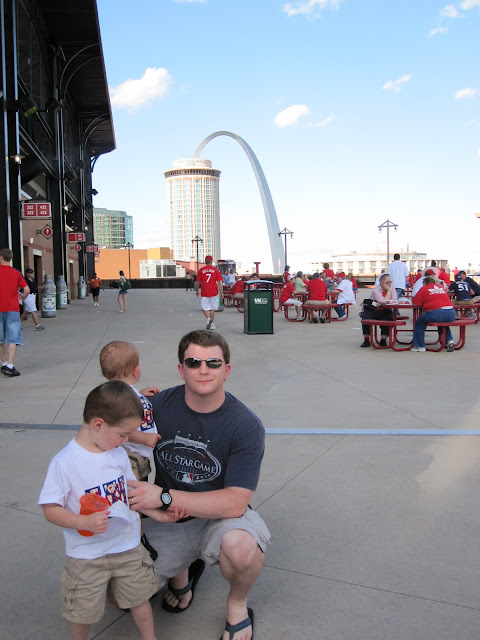 It's more like a silhouette of our family, but I thought the field and the Arch looked really great. 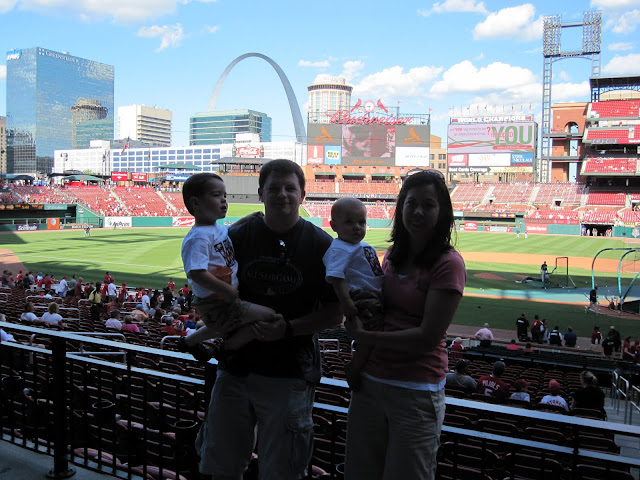 Busch Stadium is one of Mark's favorite ballparks of all time. 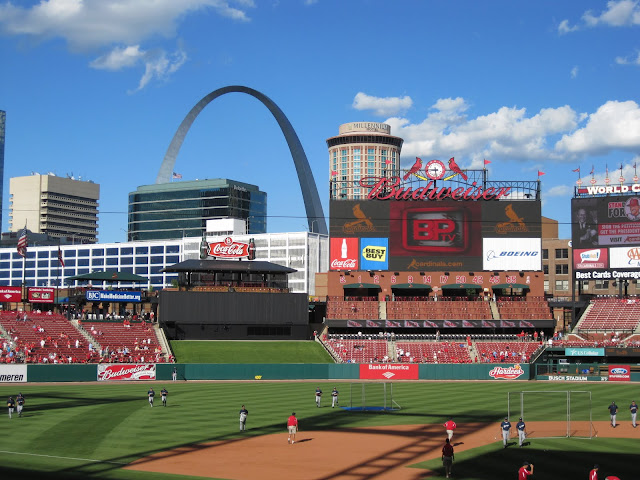 Next stop, Indianapolis!
Posted by Michele at 9:30 PM