Christmas morning at our house was magical, special, and fun.  The boys woke up (around 7:30a.m.) excited and ready to tear into their gifts that Santa left them.  They had both wanted a Nintendo 3ds and games.  Other than that, they didn't have a lot on their Christmas lists.  The first thing I heard was "Santa left us a basketball!" and then they ran in our room to wake us up.  Each boy had two boxes, a basketball, a stocking, and one gift that was to both Ben and Will.

They could barely stand it, but I made them pose for a photo before the madness began. 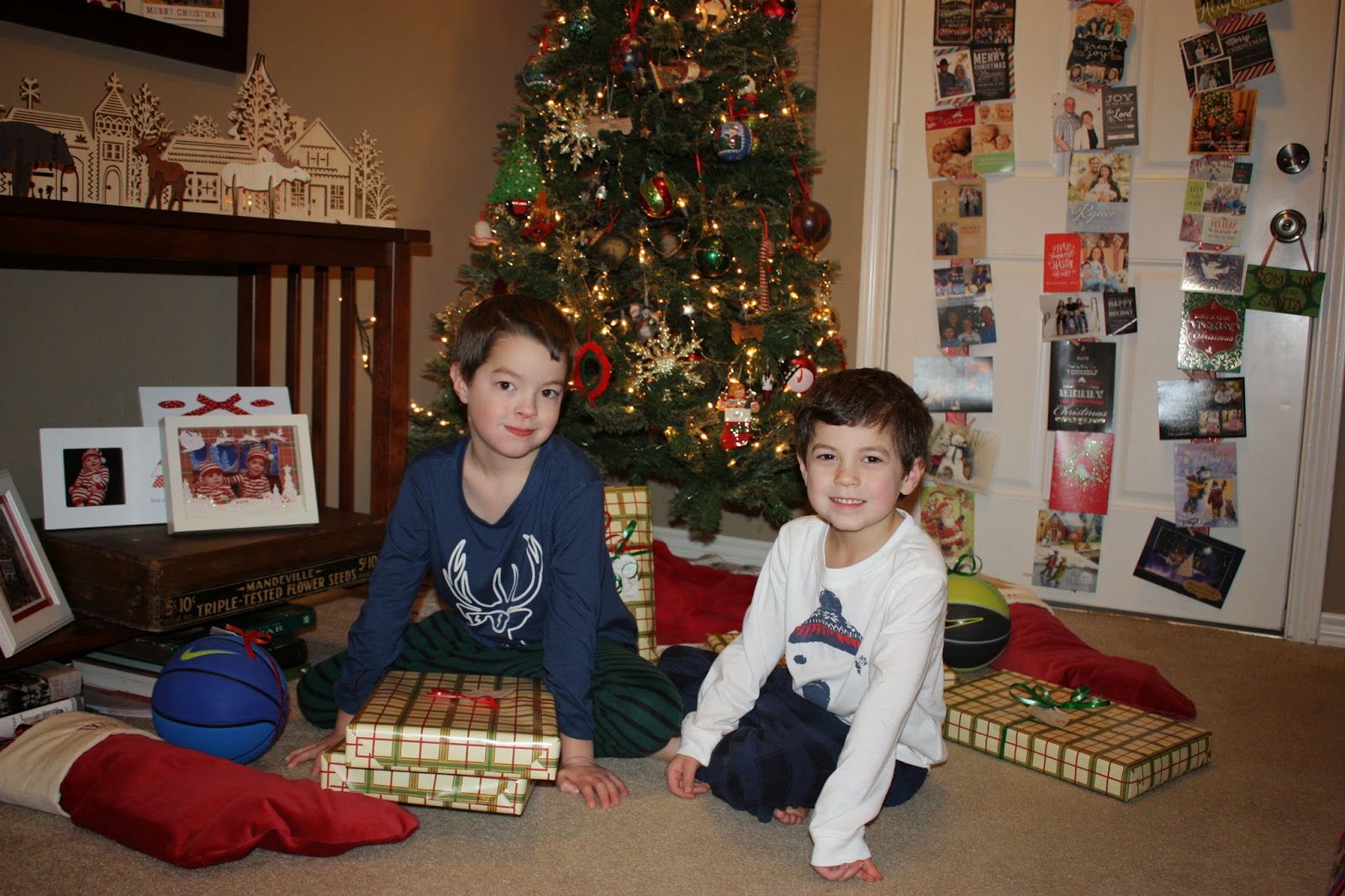 I only included these photos in the collage because I thought it was really funny and one day I think they will look back on them and laugh.  I made a collage of the gifts they opened before they got to the big gift, the Nintendo 3ds.  Their faces are priceless.  They are trying to look happy and be polite, but you can tell they really want to get to the box with the ds.  Just look at their faces!  I don't know how both boys ended up opening the boxes with the movies first, but I'm glad they did.  It made the photos even better!

The second and third photos are of Ben and Will opening boxes that had movies.  They had asked for all of the movies at some point, but they weren't on their Christmas lists.  Santa just remembered.  The only surprise that they didn't ask for was a set of Shrek movies.  The boys hadn't ever seen the movies, but we saw our cousin in Shrek the Musical last month.  Santa knew they would enjoy watching them.  You can tell they are trying to look happy, but it's a struggle. Their faces are pretty animated so no emotions are hidden. 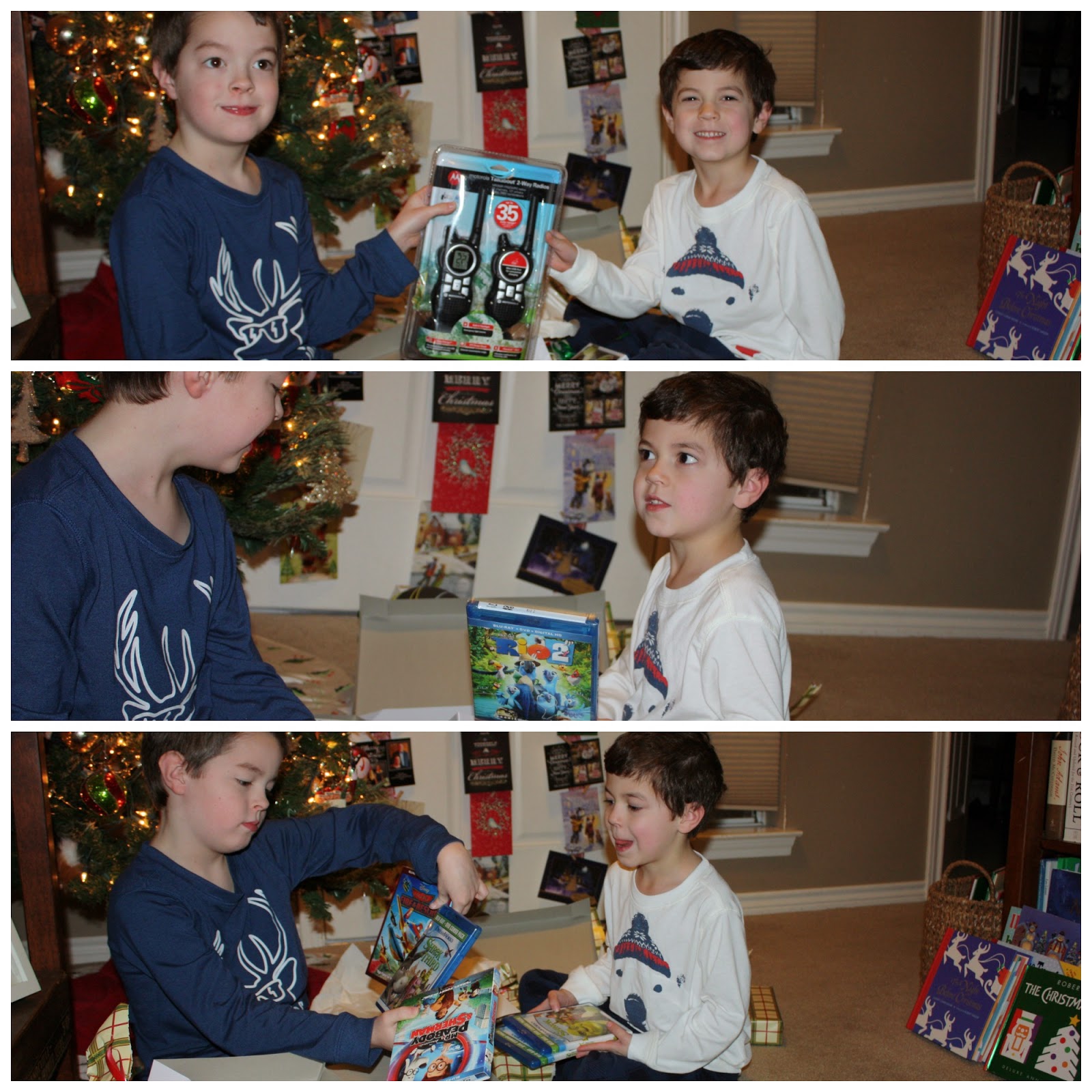 Here's where the magic happens!  Ben opened the box with the new ds!
That look of excitement is purely genuine.
Ben said, "Santa brought the right color!"  Ben's is black and Will's is blue. 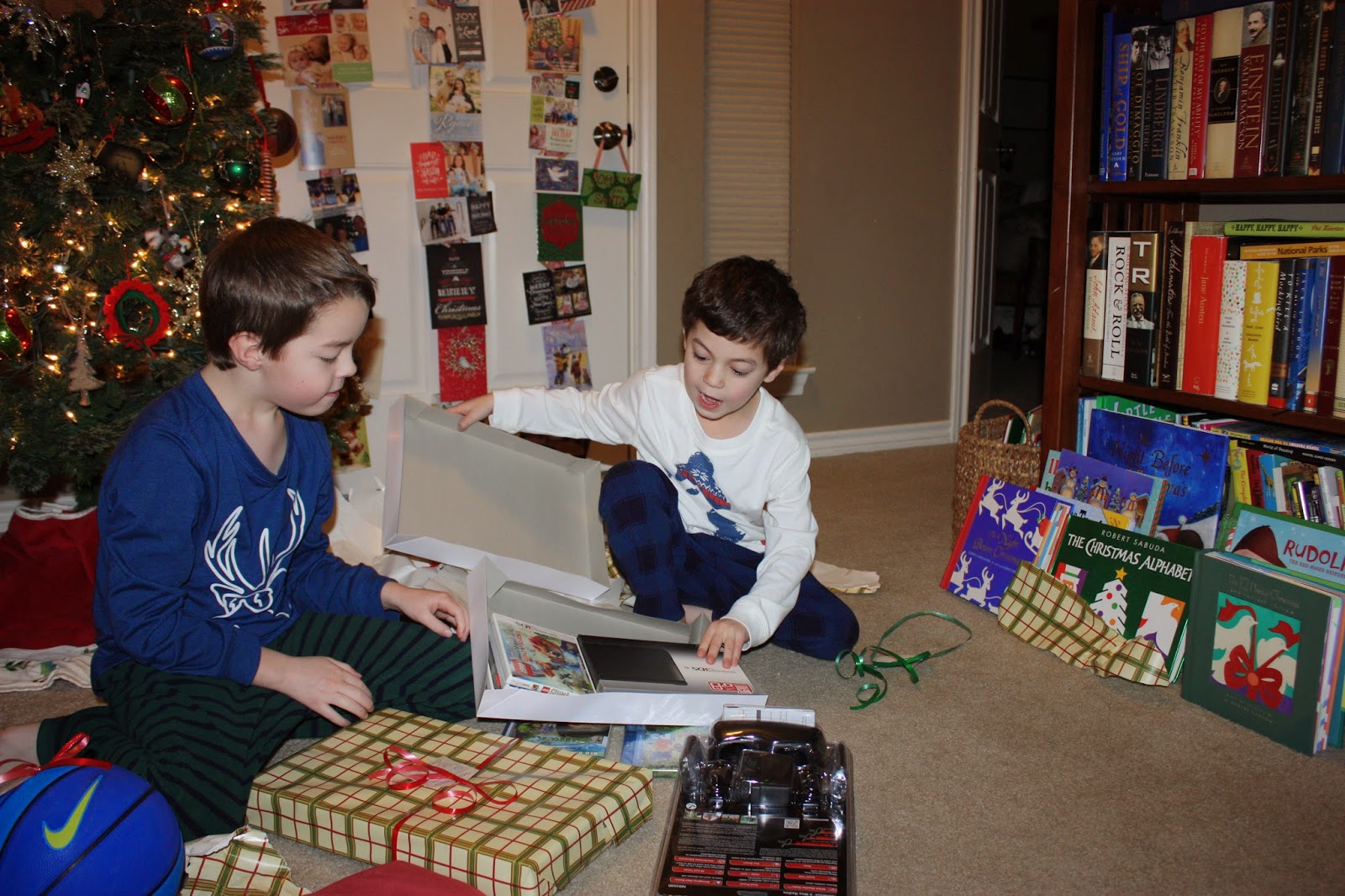 He's excited that he got the games he'd been wanting.  There's even a Lego Chima game in the box! 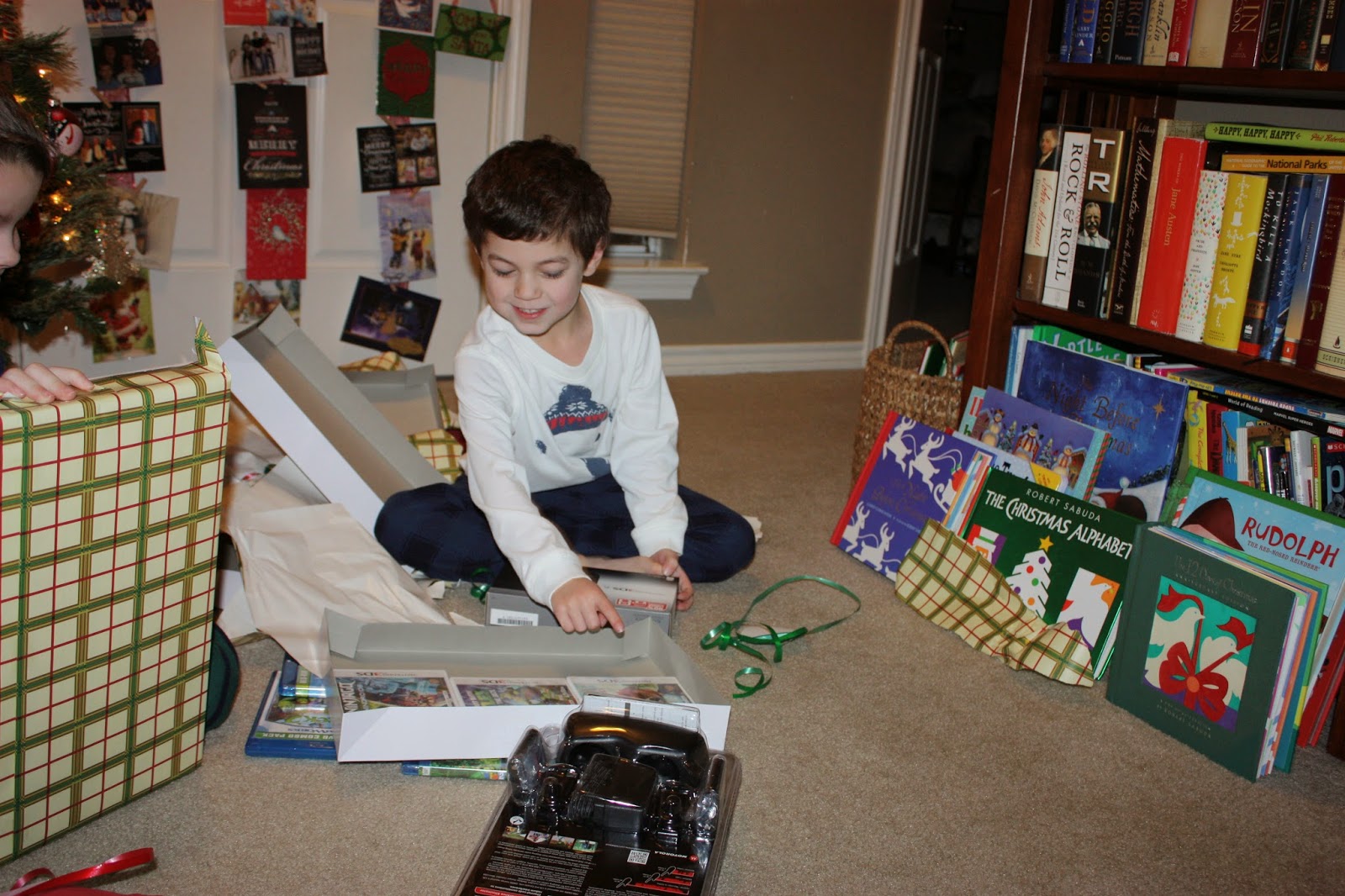 Will knew once Ben opened his, that his 3ds would be in the next box.
Will said he could tell because the box was heavier.
Look at my big boy's face.  Sincere joy! 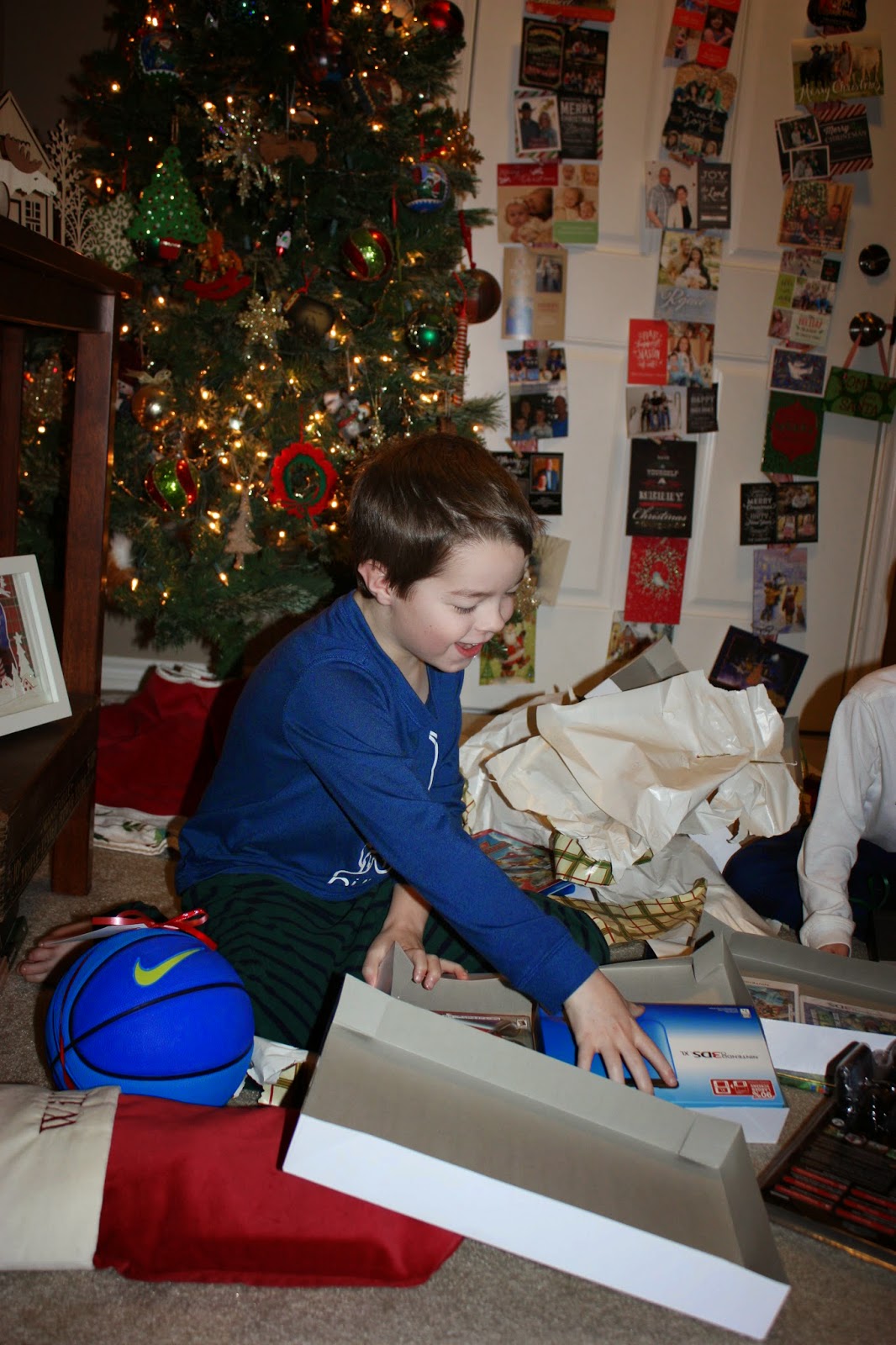 Checking out the games that Santa included. 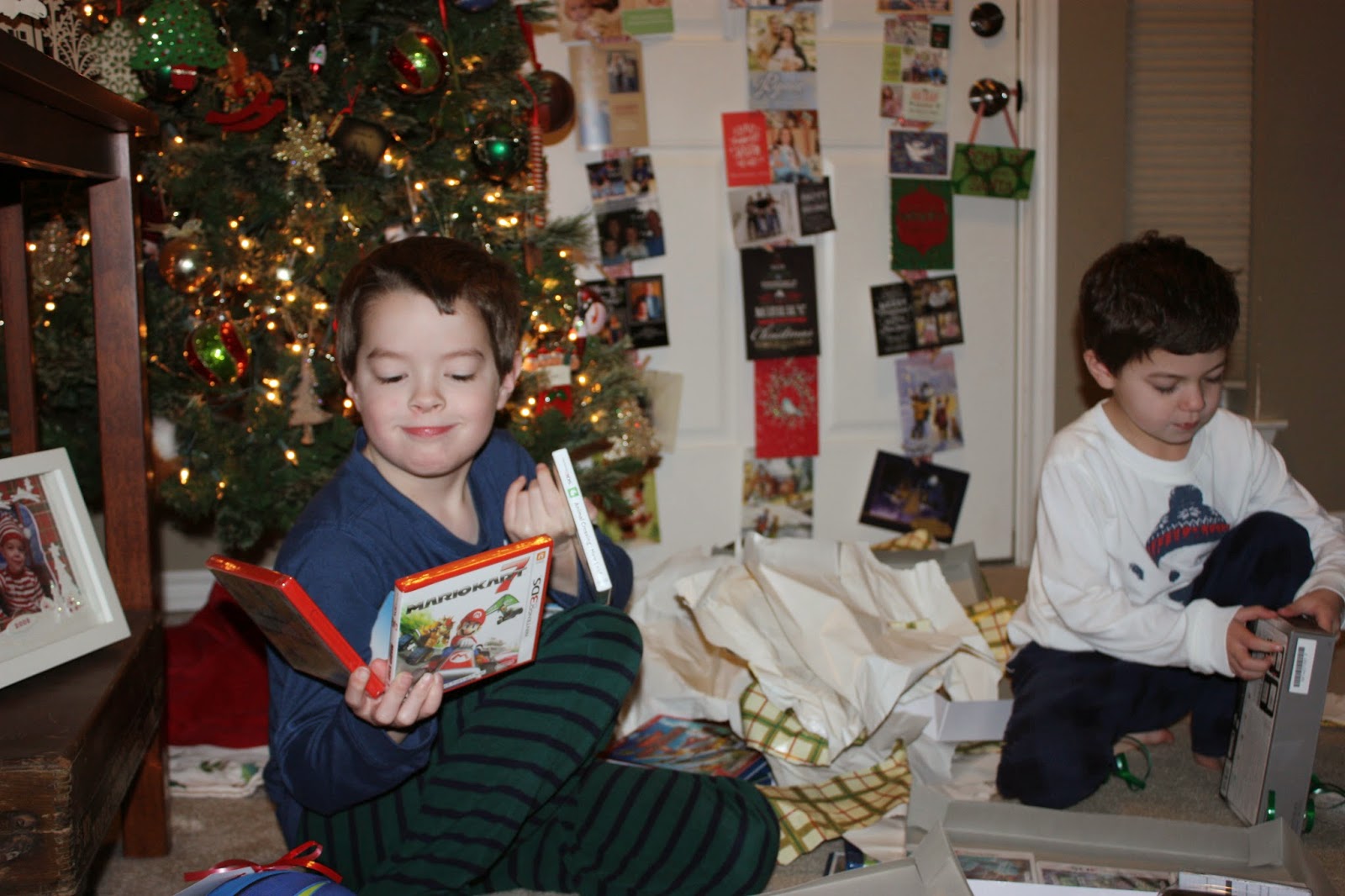 Our family looks at what's in our stockings after opening the gifts under the tree.  I wonder what other families do?  I can't remember what I did as a child.  I think maybe after.
The stockings were full of minion Peeps, baseball cards and football cards, cars, some small toys, and candy. 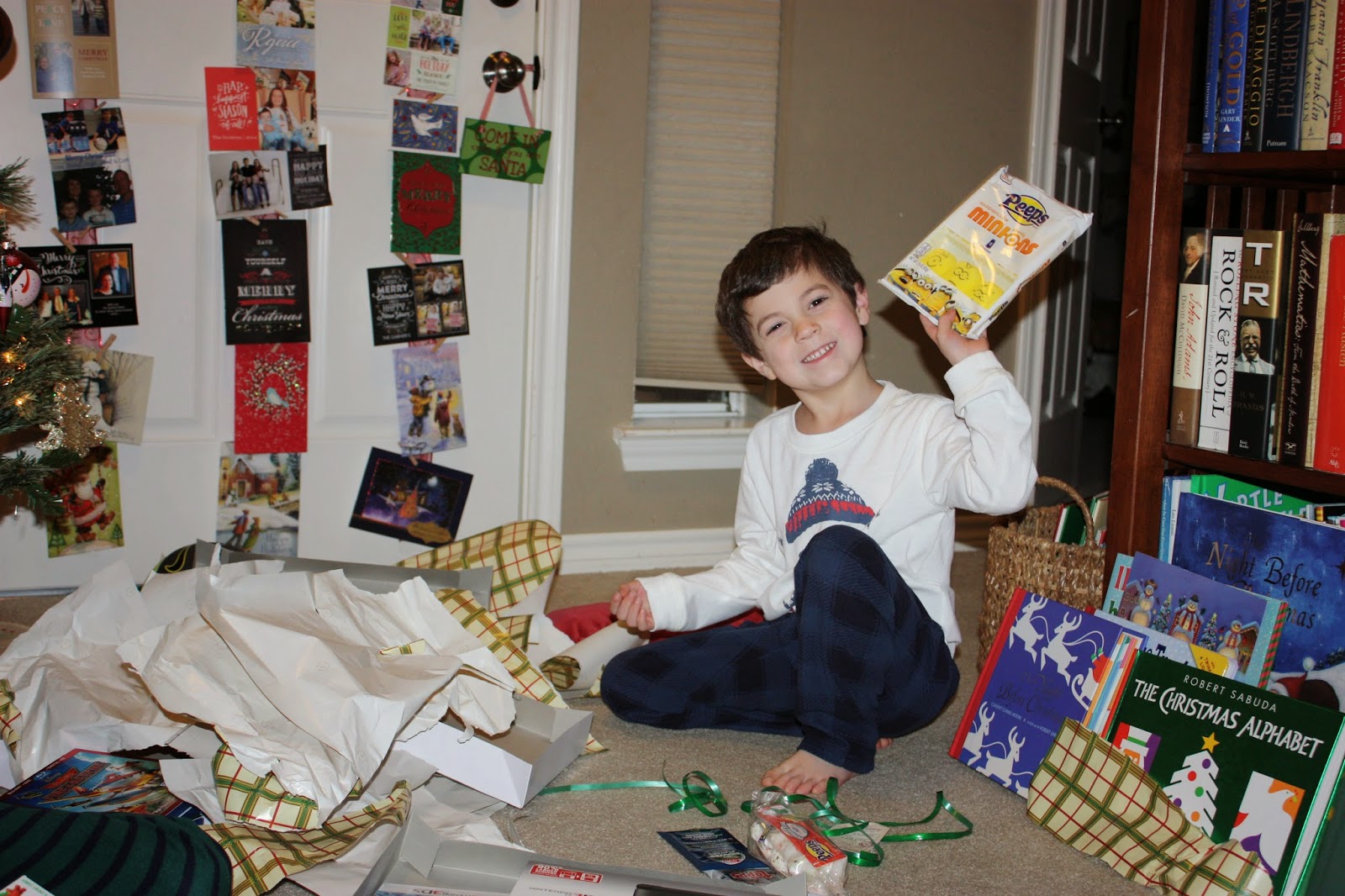 This year Santa put the cars from the movie Cars in the boys' stockings.  Santa knew how much they loved the cars last year so he gave them a few new ones this year. 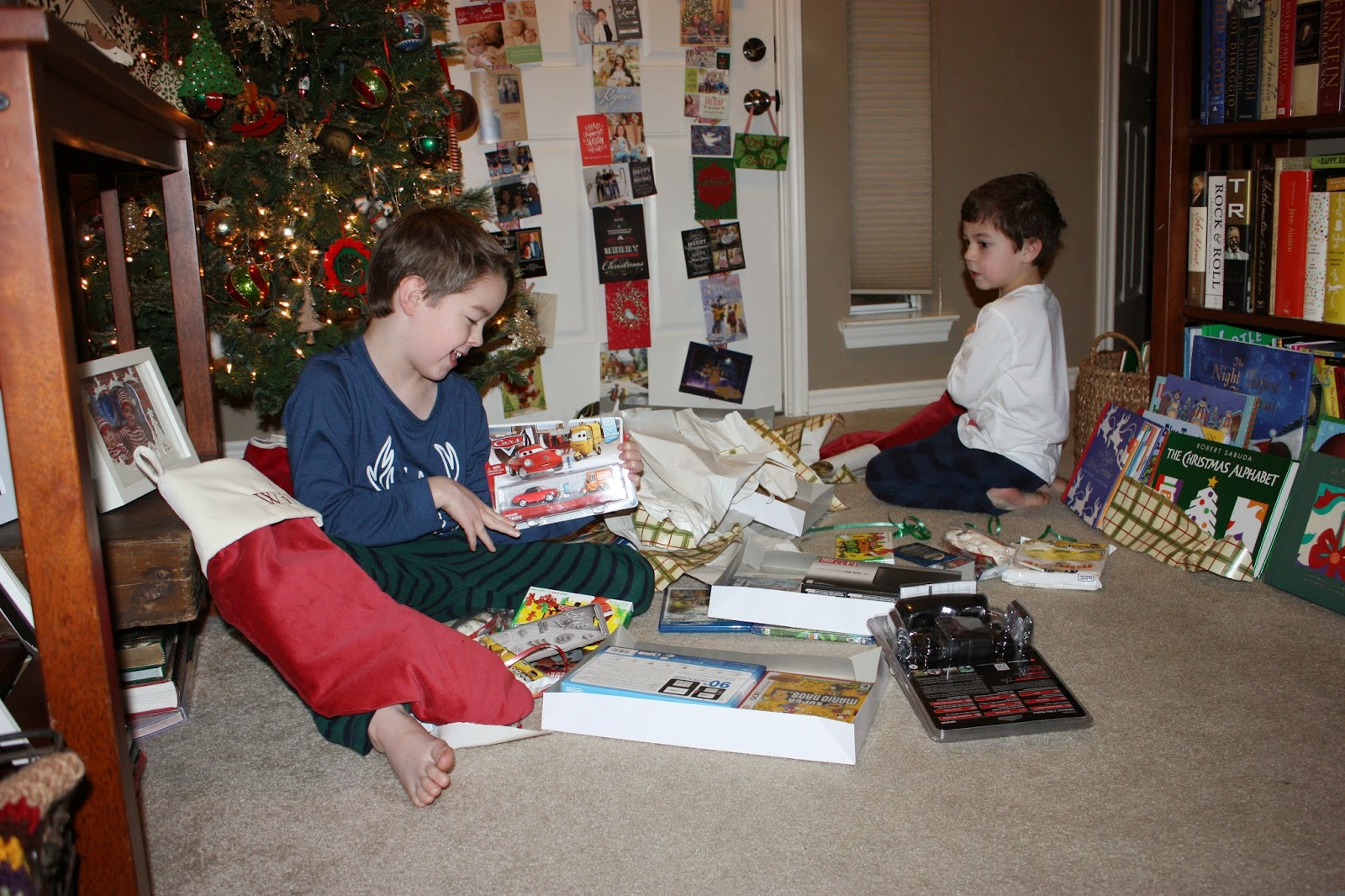 It didn't take long to open all the gifts, but it felt like less was more this year. 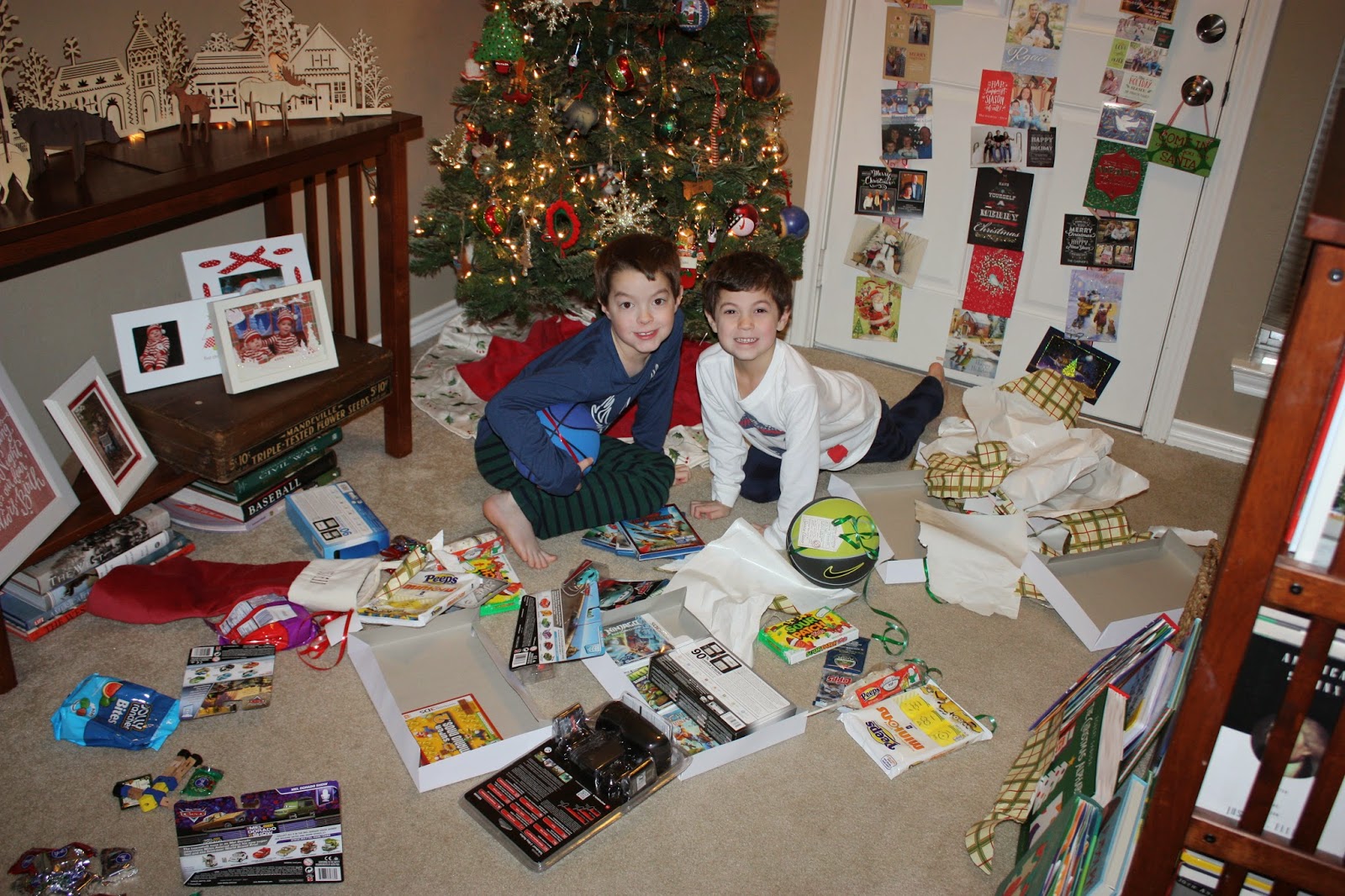 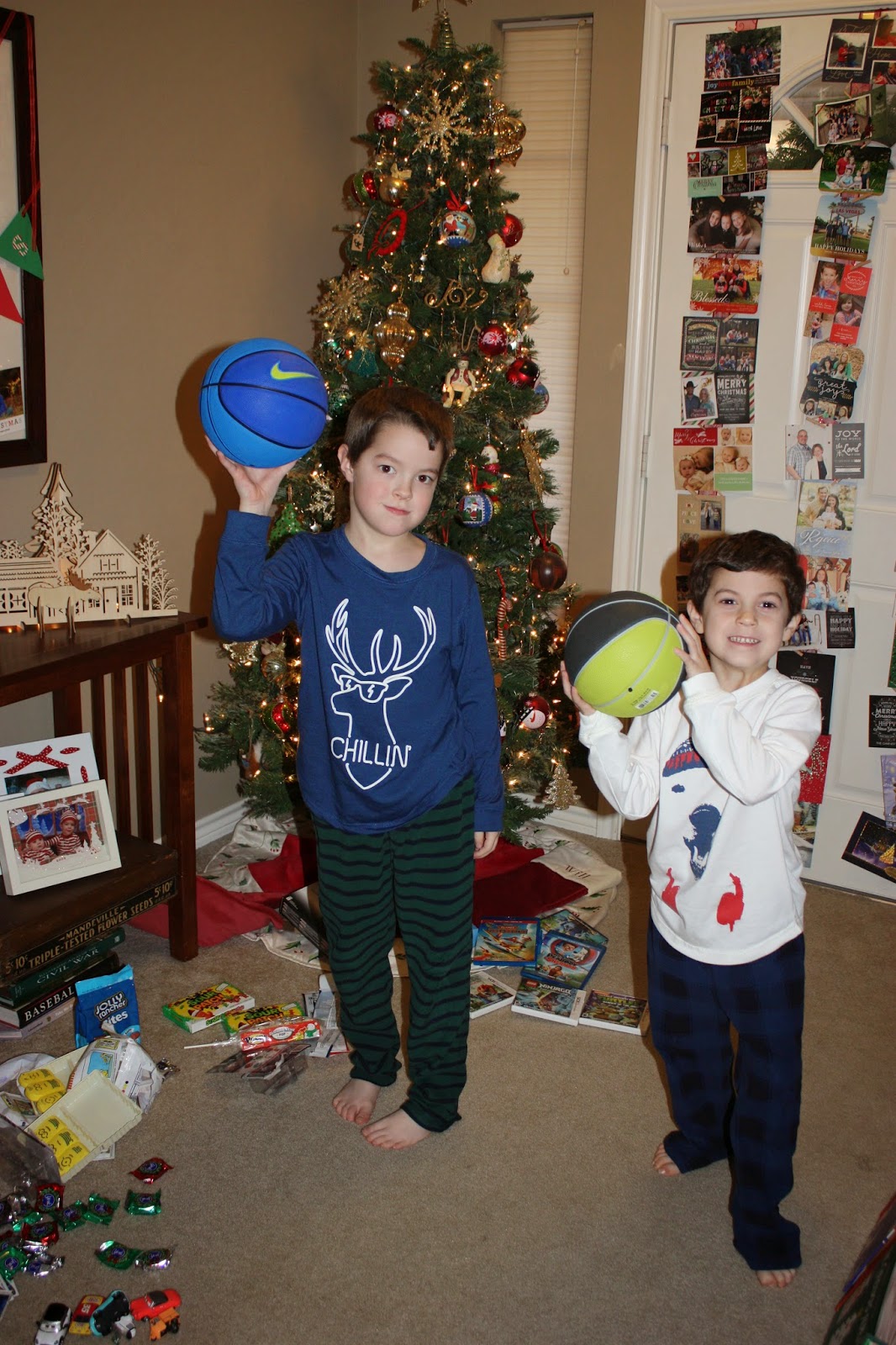 Each year Will says this, "Christmas is the best day of my life."

I don't know about that, but I agree that it's one of my favorite days as well.  We're thankful for so much.  I'm grateful to have Mark and my two healthy boys to celebrate it.
Celebrating with them makes the joy that much greater.

Everyday with them is the best day of my life!