I might not be a person with the most friends, but I feel like the friendships that I have are quality.  This weekend I was able to meet up with one of those dear friends who proves my idea of friendship is exactly what I thought it was.  I got to spend time with my old roommate, Kayreen.  We haven't seen each other in 8 years, and we were able to pick up right where we left off. Aren't those the best friendships ever!?! It's so neat!  You know those friendships are based on things that really matter.
If you've ever read the "About Me" section of this blog, then you know that I lived in Seattle, WA for 6 months after I graduated from college.  I loved my time in Seattle and am so thankful that I was able to live there for a brief time.  I'll always have a place in my heart for the Pacific Northwest.
Kayreen was my roommate while I was there, and she became a dear friend.  Living in Seattle probably would have been a very different experience if Kayreen hadn't been such a good friend.  I didn't know a single person when I moved to the city.  It was a leap of faith, but God blessed me during that time.  Instead of being lonely, I felt right at home.  Kayreen is from Seattle and made me feel welcome.  I even met her sweet family and they welcomed me in their home, which was great since my family was all back in Texas.  Kayreen was a blast to hang out with.  She's thoughtful, creative, witty, and smart. She and I had similar tastes in arts and entertainment.  We went to numerous concerts and kooky independent films.  We took road trips to San Francisco, Oregon, Vancouver, BC, and camped at Mt. Rainer National Park--so many good memories!  Our jobs were the same, too.  She also worked for Baptist Collegiate Ministries/Baptist Student Ministries.
In the summer 2004, Mark and I went to Seattle for a week and stayed with Kayreen.  That was the last time we saw each other in person until this weekend!  It's hard to believe it's been over 8 years!  This past year we reconnected when I finally joined the rest of the world and got a smart phone and started texting.
Kayreen has a friend that has just moved to Oklahoma, and she was going to be visiting her so they decided to come to Texas since they were sort of in the neighborhood.  Kayreen and her friends (from OK, Boise and Seattle) made the drive to see us, and we got to hang out Friday night and Saturday morning.
This was taken right before they headed back to OK.  I look terrible, but it's because we stayed up until 3A.M. talking and catching up. 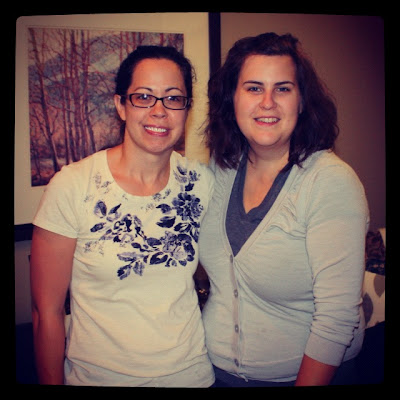 Jen, Sarah, Kayreen, and Kerri.
I'd never met Jen, Sarah or Kerri but they became instant friends.  I hope they stop by anytime they are in Texas. 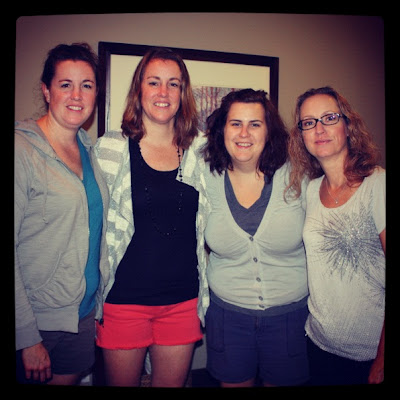